Log In Sign Up
Homepage Military Aviation‘If the A-10 can’t kill a modern tank with its gun, can we just put a bigger gun on it?’ Former Hog pilot says: ‘No.’ Here’s why. 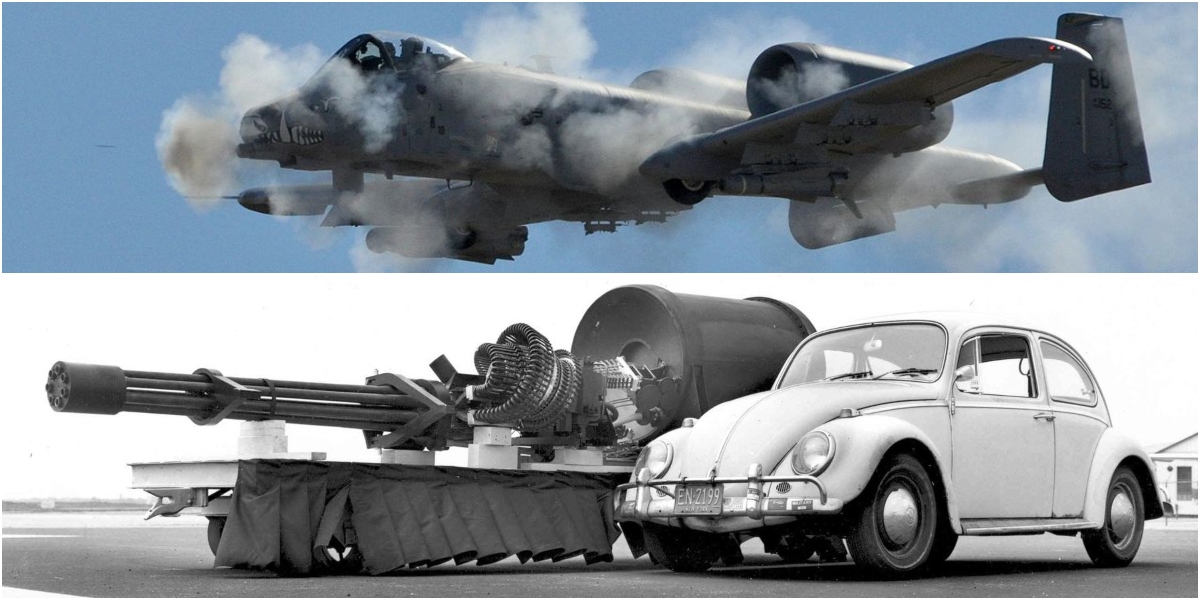 ‘Vibration. Holy hand grenades of Antioch! The Hawg already shakes like it’s going to come apart when the Gun kicks off. I can only imagine what it’d be like with something bigger,’ Lynn Taylor, A-10 Pilot.

On Nov. 16, 1970, the Air Force issued a request for proposal for a 30mm rapid fire cannon to use in the A-X Close Air Support aircraft. In June of 1971 General Electric and Philco Ford were selected to build the prototype gun, designated GAU-8. Besides development of the gun, the contract called for the development of four types of ammunition: Armor Piercing Incendiary, High Explosive Incendiary, Semi-Armor Piercing High Explosive and Target Practice.

The GAU-8 wasn’t ready for the AX fly-off competition between the Northrop A-9A and the Republic A-10A, so the General Electric M61A1 “Vulcan” 20mm cannon was installed for initial weapons testing of the two aircraft.

The first in-flight testing of the GAU-8 was done on Feb. 26, 1974. The gun was fired for the first time in flight with combat ammunition on Jun. 19, 1974. The Avenger fired more than 39,000 rounds of ammunition during approximately 60 test flights. The gun was tested in a wide variety of flight profiles: from as high as 25,000 feet to as low as 100 feet; at speeds ranging from 135 knots to 415 knots; in all attitudes (various roll, pitch and yaw) with up to five G’s.

The test program went smoothly and the Avenger was installed in all production A-10s and retrofitted to both YA-10As (replaced the Vulcan cannon originally installed).

Now, since the GAU-8 was conceived 50 years ago and if the A-10 can’t destroy modern tanks, could it (or a successor) be upgraded with an even bigger cannon?

‘First of all, let’s take a look at the assumption that an “A-10 can’t destroy modern tanks,”’ Lynn Taylor, A-10 Pilot, Joint Firepower Course Instructor, Air Liaison Officer, says on Quora.

‘As pretty much everyone else answering this question has pointed out… the A-10 can fairly easily destroy a tank. As can anything else slinging either an AGM-65 Maverick or an AGM-114 Hellfire.

‘Heck some other aircraft that can “destroy a modern tank” include the following:

‘Even a Cessna 208 Caravan. A freakin’ Cessna, can kill a tank, people. It’s really not that hard, given the right tool for the job.’

‘Okay, so, maybe what the questioner means to ask is, “if the A-10 can’t kill a modern tank with its gun, can we just put a bigger gun on it?”

‘That question is a little more valid. A little. Because there is a bit of mystery about the relative capabilities of both modern tanks and the awesomeness that is the GAU-8 Avenger cannon.

‘Rather than repeat an analysis of the Avenger’s tank-killing capability, I’ll simply point you here: Can an A-10 Warthog airplane take down an advanced Russian tank, like a T-90, with its Gatling gun alone?

‘The super-short version is: The Gun can still put a hurting on a modern tank. While the Hawg has never wanted to try to perforate a treaded tin can from the front, those things are still reliably squishy when you come at it from the right angle. That “right angle” tends to be the top and the rear.

‘There are examples in that link I just shared, including one where a lowly 25mm gun takes a tank out of the fight. If a 25mm can do it, you can bet your depleted uranium that the GAU-8 can do it, too.

‘Now, on to the last part of the question… Can you squeeze a bigger gun in the A-10?

‘I mean, theoretically, yes. Engineers are modern magicians, and if you had to figure out a way to mount, say, a 40mm rotary cannon on the existing airframe, I’m sure they could figure out some crazy way to do it.

‘But for all practical purposes? No.

‘Saying that the plane was designed around the gun is a popular statement, but it is not a joke.

‘The Gun is already (to my knowledge) the largest rotary cannon ever installed on a fighter scale aircraft. It’s an absolute beast, finely tuned for the perfect blend of power, range, and accuracy.

‘Many folks assume that the Gun is meant just for tanks. Yes, tanks are an important target that it was designed to defeat, but by no means the only target. The training rounds will punch through 1.5 inches of steel. If you want an extremely accurate, low collateral damage, point weapon system to destroy light vehicles from two or three miles away, the GAU-8 is an ideal weapon.’

‘In order to put something even bigger on the plane, you’d need to consider several factors, including:

‘Space requirements. It’s already a tight fit. You’d have to decide what to get rid of, or have parts hanging out in the airstream. Or both.

‘Weight and balance. You’d be adding a lot more weight to the front end of the jet. That would have to be offset somewhere else.

‘Thrust. Don’t even get me started on the fact that the A-10 is really a single-engine airplane, with half an engine on each side.

‘Vibration. Holy hand grenades of Antioch! The Hawg already shakes like it’s going to come apart when the Gun kicks off. I can only imagine what it’d be like with something bigger.

‘So, all of that just to get a (likely) unnecessary boost in capability. What about on a successor aircraft? Sure, you could design that in, but I’m not sure it would be worth it. I’m trying to think of a target that a 30mm can’t deal with, but a larger round could, that you wouldn’t just sling a missile at, anyway. 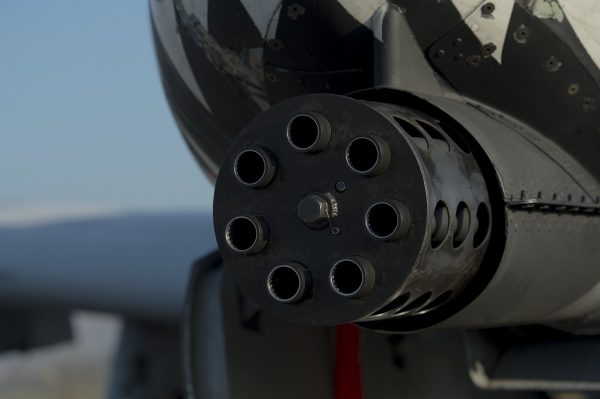