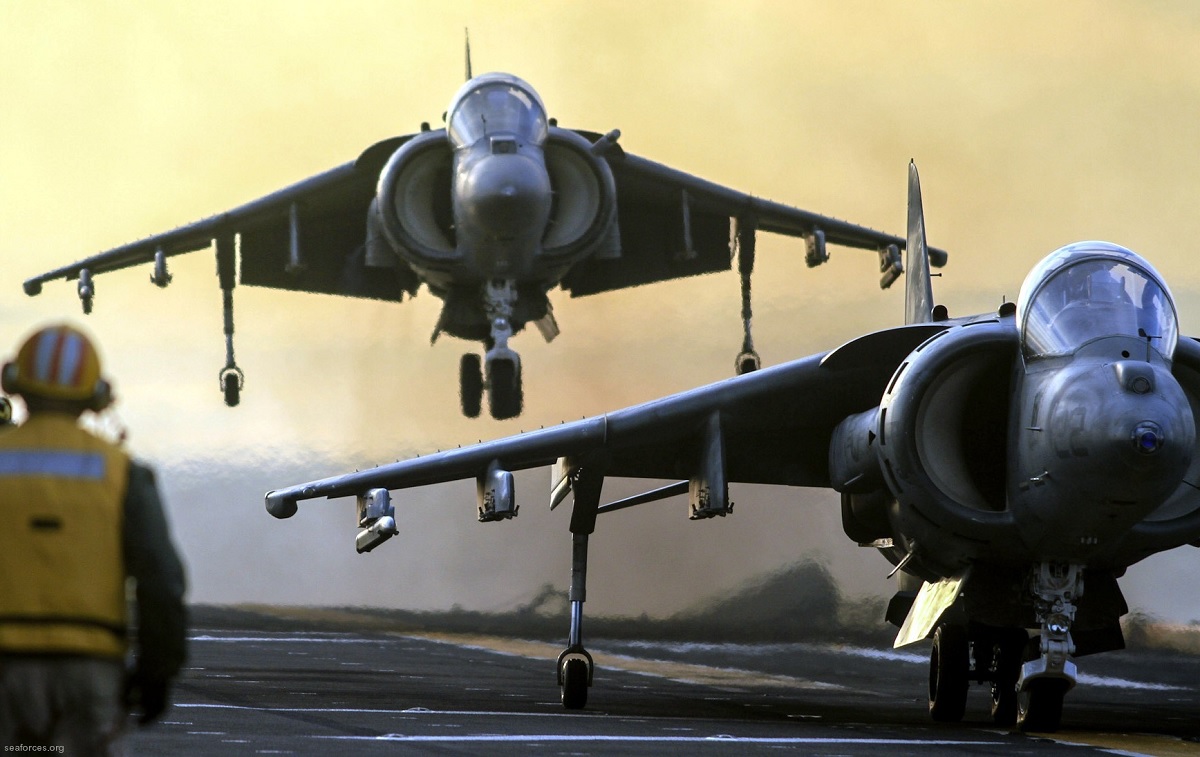 ‘I kept thinking to myself, ‘Don’t fuck this up, centre the pipper, keep it slewed on the target,’ Maj Mark Butler, VMA-214 AV-8B Harrier Pilot.

Having seen action during Operation Desert Storm (ODS) in 1991, the AV-8B Harrier II returned to the theatre from March 2003 as part of Operation Iraqi Freedom (OIF). In the initial conflict some 76 AV-8Bs were deployed, providing more than 40 per cent of the 3rd Marine Air Wing’s fixed-wing offensive firepower. Around 60 of these aircraft were sea-based aboard four ‘Harrier Carriers’, while a unit flew jets from Ahmed al Jaber, in Kuwait. Unlike in 1991, when Harrier Its employed unguided weapons, 79 per cent of the ordnance dropped was precision-guided. This was primarily due to the AV-8B’s upgrading to Night Attack or radar-equipped configuration, and the introduction of the Litening II targeting pod.

On Apr. 9, 2003 US Marines pulled down the statue of Saddam Hussein in Firdos Square, and this image, covered live on television and later in newspapers worldwide, came to define the defeat of the Ba’athist regime in Iraq. As told by Lon Nordeen in his book AV-8B Harrier II Units of Operation Iraqi Freedom I-IV, Sporadic fighting continued in several areas of Baghdad until well into Apr. 10 as the US Army and Marine Corps overran the final pockets of resistance. Numerous Coalition air strikes were conducted throughout the day.

Amongst the pilots to see action on the 10th were VMA-214’s Maj Mark Butler and his wingman Capt Tyler Bardo. The details of their mission over Saddam’s Azimiyah Palace, on the banks of the Tigris River in central Baghdad, and the nearby Imam Abu Hanifah Mosque were described by former Hornet pilot Jay Stout in his OIF volume Hammer from Above — Marine Air Combat Over Iraq;

`Maj Mark “Butts” Butler and his wingman, Capt Tyler “Hefty” Bardo, “Mover 01” flight, had just finished a high-cover escort for a group of helicopters flying low overhead Baghdad when they were directed to contact Capt Aaron “Sulu” Locher, the FAC assigned to Charlie Company of the First Battalion. An aviator who had previously flown UH-1N Hueys, OIF was Locher’s second tour of combat — he’d already seen more fighting than he’d wanted in the tribal hellhole that was Afghanistan. Locher, who had been awake since the day before, was still running the air fight at the palace. “The FAC came up on the radio”, Butler remembered, “and said that they were trying to hit a tower — they had been taking RPG and machine gun fire from it all day”.

`The tower that Locher wanted hit was actually one of minarets that made up a corner of the Abu Hanifah Mosque. There, Iraqi fighters tenaciously carried on their fight. Locher was excited when the two Harriers checked in, but knew that both he and they would have to be quick and good to accomplish what needed doing. “Between them both they had just one LGB and two Maverick missiles. And not much fuel”.

`The Iraqis in and around the mosque had been sniping at the Marines almost since the beginning of the fight, and Locher wanted them dead. “All day we had been taking fire from the tower. I wanted the Harriers to level that thing”. He passed the tower’s coordinates to Butler, along with a short brief. His expeditious control of the two ships was savvy, and reflected his experience as a Marine aviator on his second combat tour as a FAC.

“After I passed the grid coordinates of the mosque tower to the lead Harrier”, Locher recalled, “I asked him to tell me what he could see through his FLIR”.

“`A tall round building”, Butler replied.

`Butler had the correct target, but it still took several more exchanges over the radio to convince him of this. “I was looking at the biggest tower I could see”, he explained, “but I still thought that I had the wrong one because it was the minaret of the mosque”. His confusion was understandable.

Religious centres and other cultural features were lawful to strike only on very rare occasions. This was one of them. The minaret was being used by enemy combatants to launch attacks, and so now met the criteria that made it a valid target.

“`Do you have time for a practice run?” Locher asked, as he was concerned because there were so many friendly troops in close proximity. “We’ve got to get this right”.

`Butler was willing. With Bardo on his wing he swung around and set up for an attack on the tower.

“It was flawless”, remembered Locher. “I told him to set back up for real this time — and that I wanted him to give me a thirty- and ten-second time-to-impact call over the radio”.

`Butler set up for his run. Bardo was still in formation. Locher checked that the jets were pointed away from friendly troops and toward the target.

“‘Wings level”, the Harrier pilot transmitted, indicating that he was in his dive, had the target in sight and was prepared to drop his bomb.

“‘One away”. Butler let the bomb fall. “Thirty seconds”. The Harrier started a climb back to altitude and a turn away from the target.

`There was a puff of dust on the ground below the tall structure.

“‘That bomb hit exactly at the base of the tower”, Locher recounted. “Unfortunately it was a dud”. This was a common problem throughout OIF.

‘All of their work had been for naught. Still, the FAC wasted no time. “I had them set up for another run with their Maverick, and told them to aim for the bottom of the top third of the tower”.

“We reset so that ‘Hefty could shoot one of the Laser Mavericks he was carrying”, Butler recounted. “I was starting to get nervous — we were attracting some AAA now, and getting low on fuel as well”. The two Harriers dived on the tower as Locher and his team watched from the roof of the palace. Inside his aircraft Butler slewed the crosshairs of his Litening pod over the minaret. When the display indicated that the two Harriers were in range, he fired the laser and called over the radio to Bardo, “Target captured, laser’s on”.

`In the cockpit of his aircraft Bardo watched his Maverick display for the indications that the weapon was locked on to the tower that Butler was marking with his laser. He heard Butler call “Wings level” over the radio, and Locher’s response, “Cleared hot”. Still, there was no indication that the Maverick was ready to launch.

`Butler flew the section of Harriers at the mosque until they were too close and had to abort the run. He pulled his aircraft out of the dive and called out to Locher, “‘Mover 01’s aborting”. Bardo followed him out of the dive. “It was make-or-break time”, Butler said. “We had time for one more quick pass if everything went perfectly”. He knew he was taking a risk. “Flying at the same target, from the same direction, four times in a row was just asking for trouble”, he remembered. “I could just see the Weapons and Tactics Instructors [WTIs] back home raising their eyebrows”. Regardless, the instructors back home weren’t being counted on at this moment in time to help their comrades under fire.

`Butler brought the two jets around for one more attack. Again, he captured the tower in his FLIR display and fired the laser. At the same time he called out “Wings level”. Locher replied just as he had three times earlier. “Cleared hot”. Bardo’s missile finally locked on to the laser energy that Butler was bouncing off the mosque. He squeezed the trigger on the control stick and simultaneously made the call “Rifle”. The Maverick rocketed away from where it had been hung underneath his aircraft’s left wing.

`Butler remembered, “I kept thinking to myself, ‘Don’t fuck this up, centre the pipper, keep it slewed on the target’. He did. The missile struck the minaret a third of the way from the top. Chunks of masonry rained down on the street.

“`I never saw anything so pretty as when that missile came off and smashed exactly on target”, Locher said. “The entire top of that tower turned into rubble. We didn’t get shot at from there anymore”.

‘Above him, Butler arced the two Harriers into a climbing turn to the southeast. They were out of fuel and headed back for the base.’

The battle for Azimiyah Palace and Imam Abu Hanifah Mosque fought itself out by the next morning. Estimates of Iraqi and Fedayeen dead ran into several hundreds. The Marines of First Battalion Fifth Marines sustained heavy casualties as well, with the Purple Heart (awarded for injuries sustained in combat) being presented to 98 men. Miraculously, only one Marine was killed.

AV-8B Harrier II Units of Operation Iraqi Freedom I-IV is published by Osprey Publishing and is available to order here. 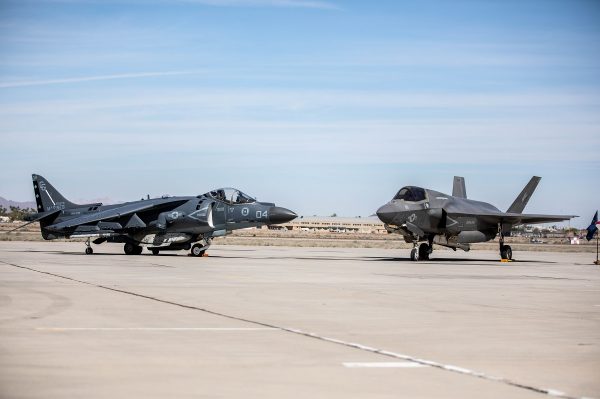