The F-15 was not able to match the Tomcat’s multiple target tracking and multiple missile-launch capabilities, or the long-range firepower of the Phoenix.

Taken at the Grumman Calverton test facility in the summer of 1972, the interesting photos in this post show the mock-up of the so called “ADCOM F-14” created by Grumman in response to an U.S. Air Force (USAF) proposal to replace the Convair F-106 Delta Dart as an Aerospace Defense Command (ADCOM) interceptor in the 1970s.Follow-On Interceptor (FOI) was intended for deployment in the continental US.

The USAF always favoured the F-15 Eagle for the FOI role, since this fighter was already in its inventory, but a modest F-14 buy would have made good sense. The F-15 was not able to match the Tomcat’s multiple target tracking and multiple missile-launch capabilities, or the long-range firepower of the Phoenix. For the FOI mission, Phoenix would be two to three times as effective as the AIM-7F version of Sparrow, Grumman claimed.

As told by Doug Richardson in his book Grumman F-14 Tomcat, the USAF was ordered to consider alternatives as the F-14, F-16 and F/A- I8, but not surprisingly decided to stay with the F-15. The F-14 could have been built from scratch at a unit cost of around $24 million, or obtained at lower cost by purchasing the Iranian fleet. Studies showed that rebuilt Iranian aircraft would cost around $13 million to $14 million each. In 1977, General Daniel James, commander-in-chief of North American Air Defense Command proposed the purchase of F-14s. Two years later, his successor, General James E Hill formally asked the Pentagon to consider the F-14, stating that earlier USAF studies had shown the Tomcat to be the most effective aircraft for the interceptor mission in terms of performance. A force of around 170 would have been needed to re-equip ADC’s interceptor wings.

One change which the aircraft would need for the overland mission was the addition of a medium PRF to augment the existing high and low rates. Without this, the aircraft could have blind spots in its radar coverage when overtaking targets flying over land. Other changes would have minimal. A USAF-style flight-refuelling receptacle could have been added on the glove section of the wing, while HF radio would be added to the communications fit.

Much of the USAF’s existing support equipment was compatible with the F-14, said Grumman. By means of adaptors, the Bendix automatic test equipment used to test F-15 avionics could handle around 137 of the Tomcat’s 189 line-replaceable units, while mechanical support equipment already in USAF service would cope with many routine Tomcat maintenance tasks, except those involving the Phoenix and its launcher, the escape system, and structural repair. The TF30 was already in the USAF inventory, while maintenance of specialized systems such as the Phoenix could perhaps have been handled with assistance from the Navy to avoid costly duplication of support facilities.

Studies showed that at 1975 prices, a 170-strong F-14 force would cost $4,300 million, compared with $3,900 million for the same number of F-15s. In practice, a force of around 290 Eagles would have been needed to provide the capability of 170 F-14s. A Grumman study suggested that given a massive Backfire raid on the US in which it was assumed that the attackers would use ECM but would not release decoys, the F-14A would score 50 per cent more bomber kills than the same number of F-15As, and would also be able to destroy many Soviet air-to-surface missiles.

Another study considered four interceptors attacking a bomber prepared to take maximum evasive action. It was assumed that once the bomber detected the fighter’s AI radar transmissions, it would release four decoys, then begin jinking. The results of zoo simulated engagements suggested that the F-14 would have a 70 per cent kill rate, while the F-15 would manage less than 40 per cent. One factor ignored in this scenario was the use of the E-3A AWACS to support the fighters.

Should the USAF wish such a facility, Grumman could provide a datalink which would allow flights of F-14s to exchange track file information from each other’s radar systems. This would cope with instances when Tomcat detected targets at the extremities of the 200 nm detection scan width of the AWG-9. Some aircraft could take on one group of targets, while information on the remainder could be passed to another Tomcat formation.

The disadvantages of operating a specialized interceptor, plus what was probably more than a degree of resistance to purchasing yet another US Navy type, counted against the Tomcat. Some studies were made of two-seat Phoenix-armed F-15 FOI designs, but addition of the Navy missile would have added an aerodynamic penalty and been expensive. Estimated development cost of a Phoenix-equipped F-15 was around $500 million. The aircraft eventually deployed to defend US airspace were standard F-15As. 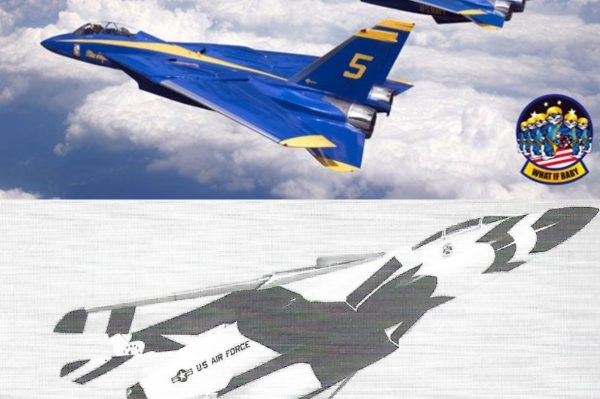