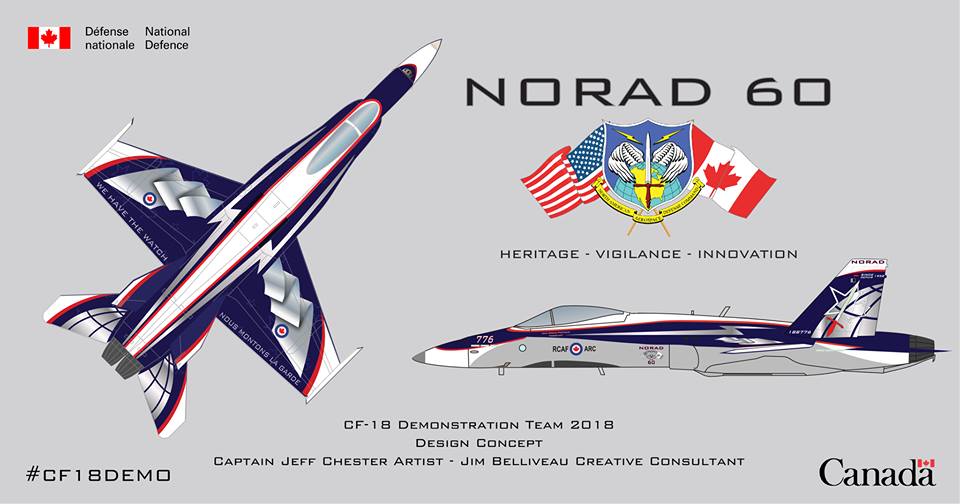 According to the RCAF press release, the service selects a theme for each year for its CF-18 air demonstration team and 2018 will feature the 60th Anniversary of NORAD.

The design: Elements from NORAD’s logo – lightning bolts, a north-pointing sword, the globe, and silver stylized wings that evoke both the northern lights and radar sweeps. Taken together, the motif is undeniably symbolic of NORAD’s ongoing commitment to the protection and defence of North American airspace, and the RCAF’s role in guaranteeing Canadian sovereignty.

Throughout the year, NORAD will hold several events aimed at highlighting the importance of honouring the past, guarding the present, and protecting the future.

NORAD is a combined, bi-national military command established by an agreement in 1958 between Canada and the United States to monitor and defend North America. NORAD is supported in Canada by the Canadian NORAD Region (CANR), headquartered in Winnipeg, Man., and the Canadian Air Defence Sector (CADS) at 22 Wing North Bay, Ontario. CANR maintains CF-18 aircraft on standby at 3 Wing and 4 Wing along with CC-130T Hercules air-to-air refuellers operating from Winnipeg, in support of the NORAD mission.

“As the Commander of the Canadian NORAD Region, I am thrilled to have the opportunity to showcase the important NORAD mission and our important bi-national partnership through the 2018 National CF-18 Demonstration program,” said Major-General Christian Drouin, the commander of 1 Canadian Air Division/Canadian NORAD Region. “The men and women of NORAD work diligently to keep watch over our countries and to protect the air sovereignty of North America. Twenty four hours a day, seven days a week, no matter what – we have the watch.”