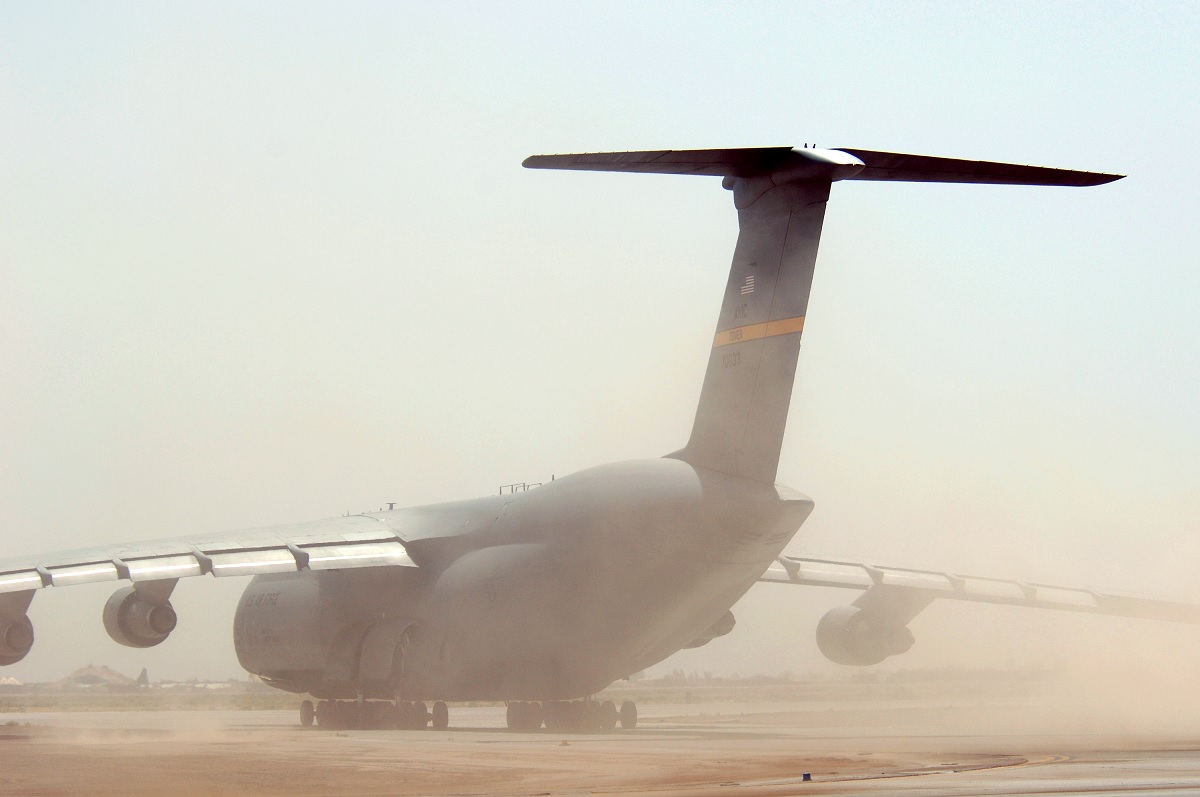 “‘You should see the spectators running for their lives, pilot!’ Apparently a few hundred show-goers wanted to watch the C-5 taxi out and had gathered on the far side of the rental car parking lot I had insisted be cleared. As the engine blast swung toward them, the crowd caught the hurricane torrent sweeping across the lot as it picked up trash, debris and dirt and scoured them with it,” Jay Lacklen, former C-5 pilot

There are moments from all careers where you think back and cringe at some of the things you have done over the years. “How could I have done that?” you ask yourself.

My prime example happened at the Traverse City, MI, air show in July 1987, held in conjunction with the National Cherry Festival. […] Air shows are second in danger only to combat. The crews’ guard is down, and thousands of people are watching, a sure mix for disaster. Although this fiasco would be almost entirely self-inflicted.

Air show planners wanted us to arrive early in our C-5 out of Dover. We could wind up blowing little airplanes away if we tried to maneuver into parking by the passenger terminal after other show aircraft had arrived.

We arrived in bright sunlight Friday morning. The “Follow Me” led us to the side of the terminal, where the final marshaller guided us in close to the structure. As the pilot in command in the left seat, I had concentrated on the marshaller so I could follow his instructions precisely. I had no idea where he was taking me; he was in control.

Finally, he raised his arms above his head in an “X” with his wands, and I set the parking brake. As I looked around after running the shutdown checklists, I grew concerned over how close we were to the terminal. The marshaller’s responsibility was to get me into the spot, not out of it. That was on me, but I had let them park me without surveying the spot first.

As I deplaned I walked to the right wing and saw trouble. Although we were well clear of the main terminal building, a covered concrete passenger walkway descended down a small hill by the terminal to the ramp about a hundred feet from the cockpit. I saw immediately we could not clear it horizontally with our right wing. I could taxi over it and probably make it, but that would be highly illegal and I might learn why they attach pilot wings with Velcro patches; so they can rip them off if you screw up.

This was the era of “rope-a-dope,” where we had lengths of rope to gauge if we had enough room to clear obstacles by our dictated minimum of 25 feet. (The rope-a-dope term came from the 1974 Ali vs. Foreman fight where All lay on the ropes and let Foreman punch himself into exhaustion). I didn’t need the rope to know the score, however. At least 10 feet of wing would pass over the tunnel with about 10 feet of clearance, if I was crazy enough to try it.

I decided I’d just have them back us up with a tug at the end of the air show and that would be that. On Sunday when I contacted ground control, however, they said they didn’t have a tug big enough to move us. I was on my own.

In my right mind, which I usually am, I would have called Dover and explained my plight, and asked for them to fly up a tug. This would be excruciatingly expensive and the air wing would squawk mightily about how I had let myself get cornered like this. However, I had no choice; that is where they parked me! In addition, however, there were several reservists on this large air show crew who had to be back at work on Monday morning, and that wasn’t going to happen if I had Dover fly in a tug. Then, the final wrinkle appeared that pushed me into insanity.

In talking to the air show manager trying to obtain a tug, he told me CINCMAC was flying in Monday to address the Traverse City Chamber of Commerce. What? You’ve got to be shitting me! The four-star? Here tomorrow? I could just see him spotting my C-5 pinned to the terminal and strolling over to ask me how I had been so stupid to get myself boxed in like this.

[…] I kept contemplating doing the unthinkable… and then I decided I’d do it, taxi that wingtip over the tunnel and escape all heat, unless, of course, I hit the tunnel, and then the heat would be unbearable. Fuck it, I thought, I have ten feet of clearance, no way will I hit it. I let the improbable vision of Gen. Cassidy pinning me to the wall overcome my common sense. I would, however, have to convince the other two pilots, who were also evaluators, to go along with this.

As this ill-advised plan unfolded, it got worse than I anticipated. So I took one more shot to avoid doing the unthinkable; I went for a final legal option. The C-5 can be backed up with reverse thrust if you are lightweight, which we were. It needed a higher headquarters waiver, however, because if you hit the brakes too hard, the plane would sit on its tail. I decided to ask because if I, as an evaluator, wasn’t qualified to do the maneuver, who was?

I called 21st command post and got connected, via the command post controller, with Zark the Shark, a long-time headquarters evaluator who would occasionally give no-notice evaluations on local training missions at Dover. If you showed up at base ops and saw Zark’s helmet bag, you knew you were “it” for a no-notice that day. Zark was actually pretty mild-mannered and easy to work with, but I was about to test him.

I told him that I had been taxied into an untenable parking spot at an air show, but I could extricate myself if he would waive me to back up the plane about fifty feet. His answer was swift: not only no, but hell, no, get yourself tugged out. I explained the airport didn’t have a tug. He told me to have one flown in. There went my last legal option to leave that day.

I had discovered during my career that if I got a sick feeling in the pit of my stomach as I contemplated doing something dicey in an aircraft, I should heed that warning and NOT DO IT! Too often, alas, I did it anyway and usually got away with it. I would be playing Russian roulette with my career; I had five chances out of six of getting away with it to avoid a relatively minor sanction. I cannot fathom why I took that chance.

So, the unthinkable would become the plan. The other pilot evaluators shot glances at each other as I explained what I wanted to do. One was senior to me, one junior. After a few moments of silence, they said OK, they would join the conspiracy. They, too, thought the wing would clear the tunnel easily and we would be “outta here.”

Surveying what I would have to do, I saw another problem. I had to make a very hard left turn to escape the spot. That would mean I’d have to use high power on engines three and four to overcome the drag of the nose wheels turned hard left. That meant hurricane-force winds would be unleashed behind the right wing, and in the direct path of that blast was a lot full of rental cars. Great! I walked into the rental office and told the manager he had to move all the cars because a hurricane was coming when we started to taxi. He soon had the cars moved.

The show ended and the small planes took their own sweet time clearing a path for us, but finally, it was show time at the air show.

The senior evaluator climbed atop the tunnel to wing-walk me over it. The scanner would clear from the ground. That scanner was a female sergeant nicknamed “Big Bird:’ and she positioned herself well in front and left of the aircraft nose.

We started engines and asked for taxi clearance to the runway. Ground cleared us to taxi and I started the power up. The turmoil in the pit of my stomach went into overdrive. I pushed up engines three and four, leaving one and two at idle for maximum differential power. The engines rose and fairly screamed before the friction of the cocked nose wheel finally broke loose and we started to slowly taxi out of the spot in a hard left turn.

The wing approached the tunnel and my “tunnel scanner” said it looked good. Just as the wing started over the tunnel, however, Big Bird suddenly screamed “Holy shit!!!” on interphone. My heart lodged firmly in my throat and I slammed on the brakes. The right wing shuddered and began flexing up and down over the tunnel.

“You should see the spectators running for their lives, pilot!” she said. Apparently a few hundred show-goers wanted to watch the C-5 taxi out and had gathered on the far side of the rental car parking lot I had insisted be cleared. As the engine blast swung toward them, the crowd caught the hurricane torrent sweeping across the lot as it picked up trash, debris and dirt and scoured them with it. Some turned and staggered away in the torrent of air, others dropped their belongings and fled. I’m sure it was quite a sight, but it came at exactly the wrong time. I wanted to kill Big Bird on the spot.

“You’ve got it made, pilot,” said the tunnel scanner. “I’m coming back aboard.” I finished the turn and I had escaped; it had worked.

As Big Bird came back on board I upbraided her for shouting at just the wrong time for something irrelevant to our desperate task. I was wrong to do that. It was my fault. I did this to us and if anything happened, it was on me, as this was. I wanted to lambast her as a surrogate for blasting myself, instead, for doing this. There was only one guilty bastard here, and it was me.

So the reservists got home to go to work, I got to miss Gen. Cassidy arriving in Traverse City, and Zark the Shark apparently never checked to see how I got out of town. I had been ill-advisedly playing on my proverbial train tracks again, and the train had missed me yet again. 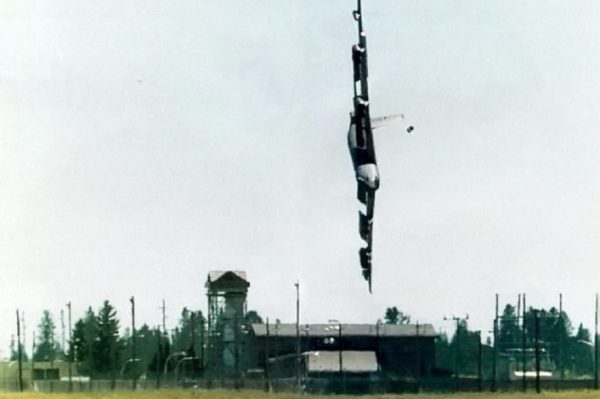