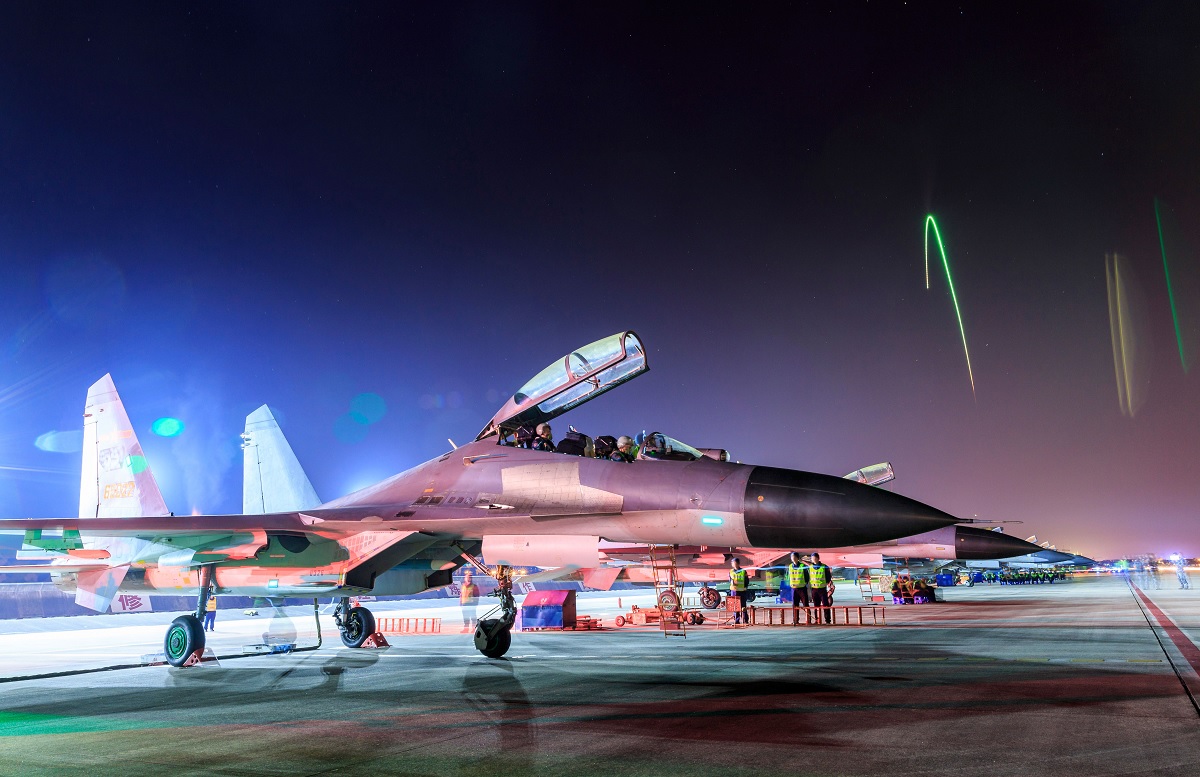 The Shenyang J-11 is a single-seat, twin-engine jet fighter, whose airframe is based on the Soviet-designed Sukhoi Su-27 air superiority fighter

Taken on Mar. 9, 2018 the beautiful photos in this post show J-11 fighter jets attached to an aviation brigade of the People’s Liberation Army Air Force (PLAAF) under the PLA Eastern Theater Command conducting night flying training missions in order to keep pilots current on skills needed to operate in the dark.

The Shenyang J-11 (NATO reporting name Flanker B+), is a single-seat, twin-engine jet fighter, whose airframe is based on the Soviet-designed Sukhoi Su-27 air superiority fighter. It is currently manufactured by the Shenyang Aircraft Corporation and PLAAF is the sole operator of the aircraft.

The J-11 was born in 1998 as a Chinese version of the Soviet-designed Sukhoi Su-27SK air superiority fighter after China secured a $US2.5 billion production agreement which licensed China to build 200 Su-27SK aircraft using Russian-supplied kits. Under the terms of the agreement, these aircraft would be outfitted with Russian avionics, radars and engines. However, in 2004, Russian media reported that Shenyang co-production of the basic J-11 was halted after around 100 examples were built. The PLAAF later revealed a mock-up of an upgraded multi-role version of the J-11 in mid-2002.

The indigenous J-11B variant incorporates various Chinese material modifications and upgrades to the airframe with improved manufacturing methods in addition to the inclusion of domestic Chinese technologies such as radar, avionics suites and weaponry, including anti-ship and PL-12 air-to-air missiles presumably for the role of a maritime strike aircraft. The alleged reason for the sudden stop in the production line of the J-11 was because it could no longer satisfy the PLAAF’s requirements, due to elements such as the obsolete avionics and radar.

The J-11/J-11B’s legitimacy remains unproven, despite a wealth of information coming to light since 2007. In the course of a press conference at the 2009 Farnborough Airshow, Alexander Fomin, Deputy Director of Russia’s Federal Service for Military-Technical Co-operation, reported that Russia had not so far tabled any questions to China with regard to “copying” military equipment.

Fomin reported that Russia handed China the licences to manufacture the aircraft and its components, including an agreement on the production of intellectual property rights. Details of intellectual property rights, however have not been disclosed, fuelling speculation about a “secret” contract or parts of the original contract. The licence, at least officially, did not include an aircraft carrier version- Sukhoi Su-33 nor any variant of it, such as the Shenyang J-15.

At the MAKS 2009, Rosoboronexport’s General Manager Anatoli Isaykin was quoted saying: “Russia is going to investigate the J-11B, as a Chinese copy of the Su-27 and Sukhoi Company is partaking in the process.” In 2010, Rosoboronexport announced via their official website that it was in talks with the Chinese side, regarding the ongoing production of weapons that Russia considers as un-licensed. In light of the ongoing investigations, Rosoboronexport expressed its concern over future sales of advanced Russian systems and components to China.

Photo credit: Chen Le and Fu Gan via Ministry of National Defense of the People’s Republic of China