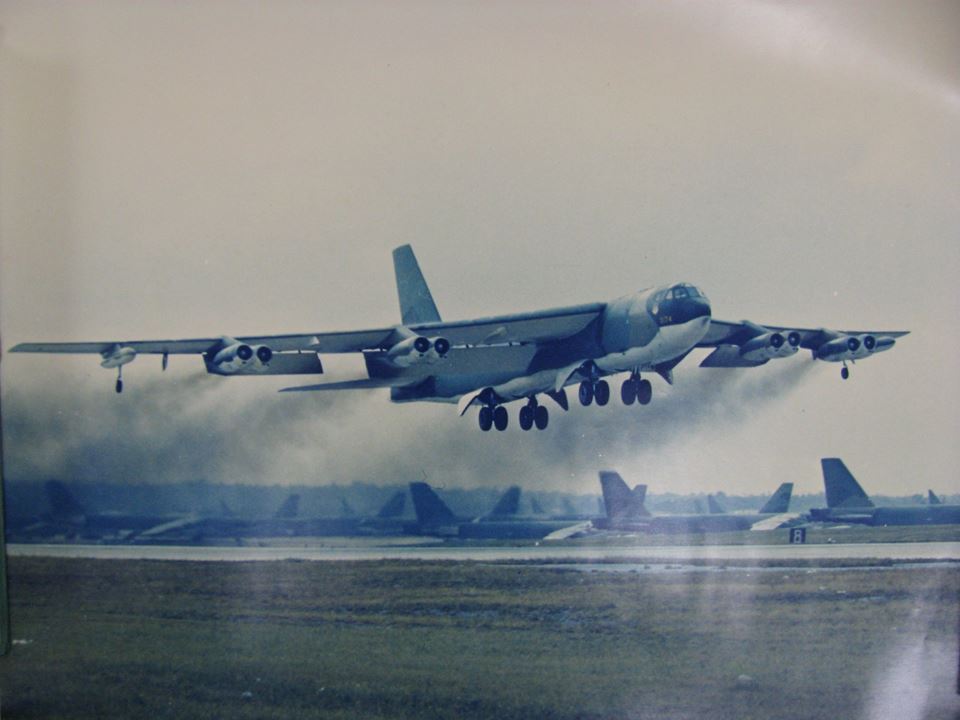 “The three B-52s sat behind the runway hold line awaiting permission for the final B-52 takeoff from U-Tapao. Then tower cleared us for takeoff. On interplane frequency, I said, ‘OK, guys, let’s take our Buffs and go home,'” Jay Lacklen, former B-52 pilot

Putting Out The Arc Light

At the end of May, the B-52 Arc Light mission ended as the final three-ship cell, with our crew in the lead, departed U-Tapao. For many years, SAC crew members had joked about “putting out the Arc Light for good,” and here we were about to do just that. I had only flown two actual Arc Light bombing missions in 1973, and the rest of the crew had flown none, but we got to put out the “Light” for the thousands of crewmen who had flown the tens of thousands of hours over the previous ten years. They had done the heavy lifting; we had done little for the time we were at U-Tapao, but we got to take it home for good.

We would fly in cell formation until we reached the coast of California, then “two” and “three” would leave the formation to land at March AFB, CA, and we would continue on as a single ship to Carswell AFB, TX, a sixteen-hour mission.

We had an indignity to suffer before takeoff, however. The staff told us to report an hour early so we could string up a room full of rattan furniture in the bomb bay to deliver to the deputy commander for operations at Carswell. This did not sit well. We faced a tortuously long mission without any extra duties, and this was an absolutely unnecessary task. No doubt one of the commanders at U-Tapao garnered a significant kudo for shipping the colonel’s furniture for free, but we were the ones providing the service. We hoped to be required to cycle the bomb bay doors en route over the Pacific, one final rattan bomb run.

(On a similar mission during Gulf War 1 in 1990, I had to personally deliver two live lobsters sent by General Colin Powell from Massachusetts to General Norman Schwarzkopf in Riyadh, Saudi Arabia. Getting them there alive was my assigned mission. I await my grandkids asking what I did during the war. Why, I babysat two lobsters!)

When the time came, the three B-52s sat behind the runway hold line awaiting permission for the final B-52 takeoff from U-Tapao. Then tower cleared us for takeoff. On interplane frequency, I said, “OK, guys, let’s take our Buffs and go home,” and with that we took off. As we climbed out the Gulf of Siam, U-Tapao fell silent for the first time in a decade and would largely remain that way.

At cruise over the Philippine Sea at 42,000 feet, two interesting things happened. First, a jet contrail passed over us. This was unusual because we were already at our max altitude over eight miles high, and the other contrail was so far above us I couldn’t see the aircraft. I decided it must be a U-2 or SR-71 spy plane because I didn’t expect to encounter any aircraft higher than we were, much less so far above us I would be unable to see it.

Next, a U.S. Navy ship broadcast on guard channel asking if any American military aircraft were in the area. We answered that we were, and he asked if we could go “cipher” mode, or the scrambled, secret mode on one of our radios. The ship said they had an unknown target apparently shadow them and asked if we could drop down and take a look. I said I’d have to get permission to do so because I couldn’t make my destination if I used the extra gas to chase a shadow. Shortly thereafter, the ship said they had resolved the issue and we wouldn’t be needed. I thought, briefly, we might find an excuse to cycle the bomb bay doors to rain rattan on the mysterious shadow, but it was not to be. The Carswell colonel would get his damn furniture. As the final indignity, neither colonel met us at either end to thank us for our efforts.