Log In Sign Up
Homepage Aviation History‘From conducting a mock nuclear strike to evading USAF interceptors I was airborne close to 8 hours.’ F2H pilot tells the story of a memorable Banshee training mission 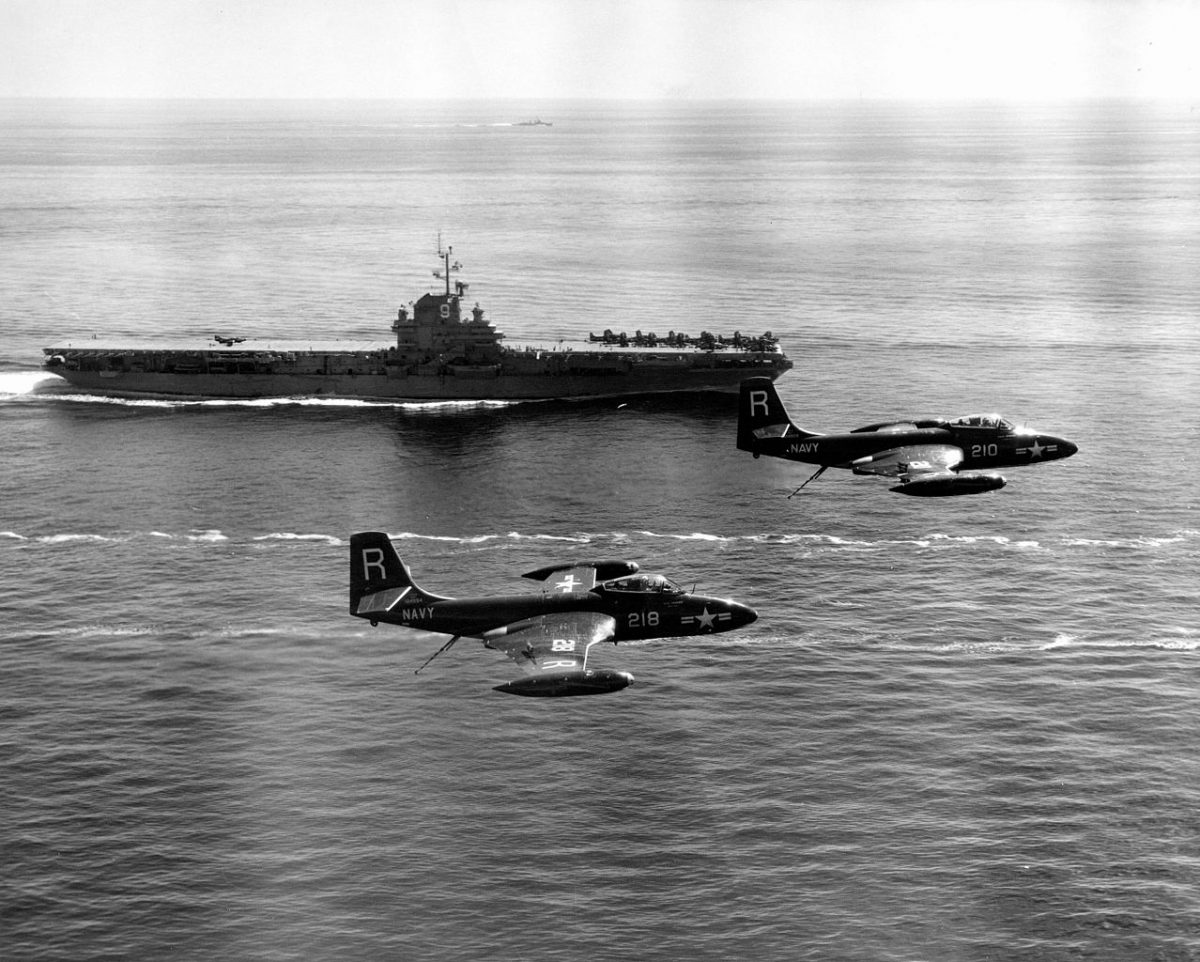 ‘From conducting a mock nuclear strike to evading USAF interceptors I was airborne close to 8 hours.’ F2H pilot tells the story of a memorable Banshee training mission

F2H pilot tells the story of when he flew the longest non stop Banshee flight off of and back onto a carrier.

The successor to McDonnell’s FH-1 Phantom, the F2H Banshee proved to be a fast and capable high-altitude fighter, making it the aircraft of choice to escort B-29 bombers over Korea. The airplane’s official nickname derived from the fact that its engines “screamed like a banshee.” To its pilots, however, it was affectionately called the “Banjo.”

The F2H-2 was also selected by the US Navy to field its first nuclear capability in a carrier based tactical jet aircraft. With its high altitude and long range capabilities, the Banshee was the best available choice for the new mission.

As explained by Rick Burgess in his book F2H Banshee Units, the initial capabilities installed in Lockheed P2V-3C Neptunes and North American AJ Savages failed to adequately fulfil the US Navy’s requirements. This led to the F2H-2 being selected for further development, with the result being the F2H-2B, which became the first carrier based tactical jet to deploy as a nuclear strike aircraft.

Lt Cdr (and future Rear Adm) Edward L ‘Whitey’ Feightner flew F2H-2Bs as a test pilot with VX 3 at NAS Atlantic City from September 1952. A World War 2 ace, Feightner had achieved nine victories over Japanese aircraft while he was assigned to VF 10 ‘Grim Reapers’ embarked in USS Enterprise (CV-6) and, later, the second VF-8 embarked in USS Bunker Hill (CV-17). ‘I got tagged with “Whitey” by [US Navy ace Lt Cdr] “Butch” O’Hare’, Feightner explained during a 2009 interview. ‘Everybody had to have a nickname, of course, in those days, and “Butch” was teaching us all to be spear fishermen and I was the only guy in the squadron that didn’t get a tan – I got red – so he called me “Whitey”. I had blond hair and couldn’t tan’.

Feightner was a project pilot for the Vought F7U Cutlass fighter and the F7U solo pilot for the Blue Angels, the US Navy’s flight demonstration squadron. Among his projects at VX-3 was the development of nuclear delivery tactics for the AD-4B Skyraider and F2H-2B Banshee. ‘We were the pioneers [in nuclear weapons delivery], especially in that low level delivery business’, Feightner said. ‘It was done purely by the VX squadrons in the US Navy. Of course, that was the reason they set us up for it. It was interesting work’.

VX-3 was commanded during that fertile time by World War 2 ace Cdr Noel Gayler. Based at NAS Atlantic City, VX-3 had a major role in qualifying the Banshees for their nuclear weapon role and developing the delivery tactics. Feightner was a part of that development;

‘Gayler was a really capable guy. He fully understood the mission of the VX squadron. During the years he was there, we made more progress on this very kind of stuff, all of it. We had so many really good projects up there. He was a guy with great vision. He was the perfect guy to be the head of that outfit. We had the Banshee 2, which, in its day, could fly higher and further than its contemporaries. There was a tremendous range on that airplane, and it’s the airplane that gave us that true Mk 7 capability [The nuclear ‘Banjo’ was modified to carry two types of nuclear weapons, the Mk 7 and the Mk 8]. We worked out all of the delivery tactics for the [F2H-2B]: the low level tactics, no electronics allowed, avoiding the AAA and so forth, with a pop up [manoeuvre] at the end.

‘That Banshee 2 was a really maneuverable airplane, but it had its limitations. McDonnell built what we ordered, but what we ordered should’ve been 100 per cent stronger. The Banshee was a phenomenal airplane. I remember Noel Gayler and I took off from Atlantic City and we flew down to Jacksonville, circled Florida for something like an hour, and then went 200 miles out to sea and landed aboard and still had fuel enough to go back to Jacksonville. That’s long legs for an airplane of that size. You could get it up to altitude and, of course, it was the first airplane that would go up to about 40,000 ft and stay there. It was a phenomenal machine.’

One of Feightner’s feats with the Banshee was the longest non stop round trip flight from an aircraft carrier – a 3220-mile sortie. Together with Gayler and Lt(jg) Mike Ames, all flying F2H-2B Banshees, he launched off Midway with Mk 7 nuclear shapes. ‘We were working off of Midway, which was 100 miles east of Guantanamo, and we had [the] entire air defense [on] the entire East Coast alerted’, Feightner recalled. ‘They knew we’d be coming during daylight hours sometime, and our target was in Lake Erie. They had a target located out there.

‘We took off from the carrier east of Guantanamo and refuelled from the AJ tankers before we got to the coastline down around St Augustine, in Florida. Then we dropped down to sea level and we flew at treetop level from St Augustine clear up to Lake Erie without being detected. This was a terrible thing for the air defenses in our country at that time. We flew up there, and the first time they ever saw us – it was a really clear day – they saw the bombs go off on the targets.

‘All the [Air Force] F-86s and F-89s in the world then came screaming down at us. We built up speed and stayed low and, when they got down to about 5000 ft, we pulled the nose on those Banshees up and we didn’t stop until we hit 55,000 ft. None of those other birds could get up there. We flew back in bright daylight to our carrier, with everybody in the world trying to get to us. They’d get up to maybe 38,000 40,000 ft before spinning out. They couldn’t even get within weapons range of us. We just sat there and watched the show as we went home. We topped off again [from] the tankers out over the ocean on the way back.

‘Gayler, Ames and I still hold the record for the longest non stop Banshee flight off of and back onto a carrier. We were airborne close to eight hours.’

F2H Banshee Units is published by Osprey Publishing and is available to order here. 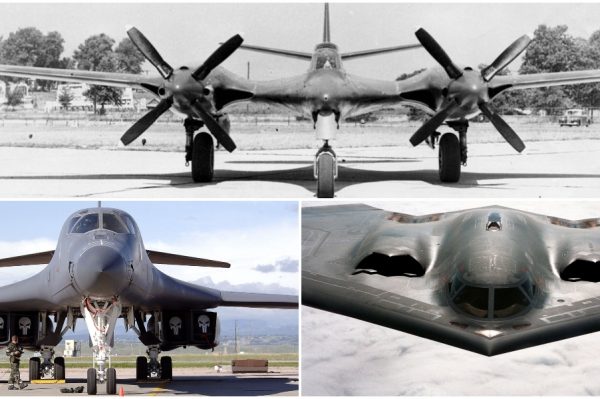 Did you know the “extreme blending” of the futuristic XP-67 has been used in B-1 and B-2 bombers for their low observability properties? How the World War II prototype interceptor Moonbat influenced frontline types. 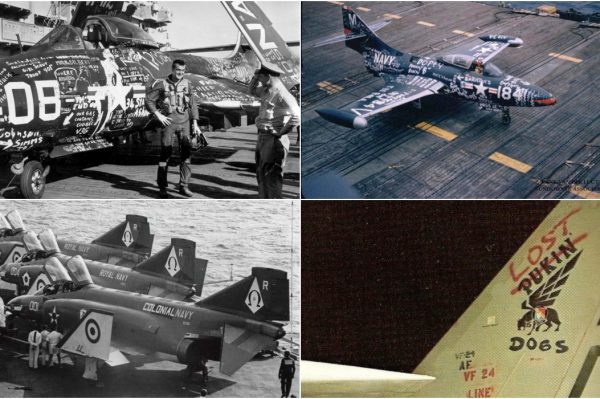 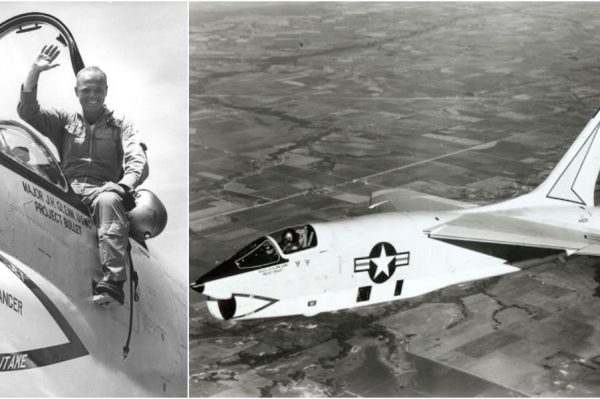