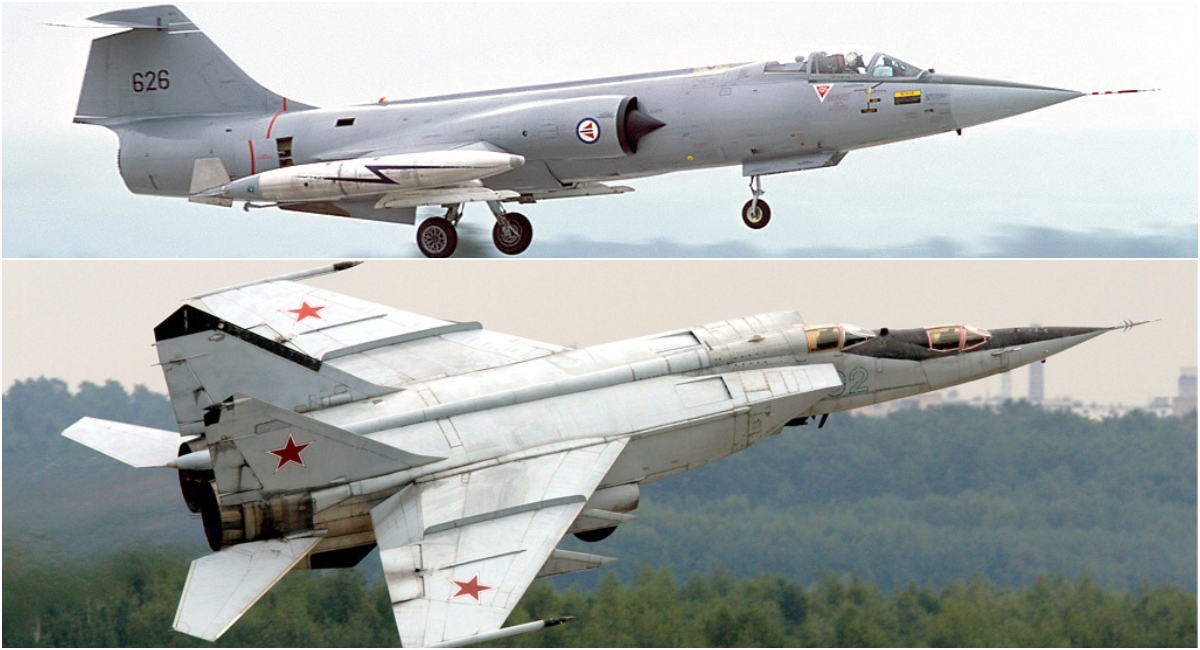 Designed as a supersonic superiority fighter, the F-104 was produced in two major versions. Armed with a six-barrel M-61 20mm Vulcan cannon, it served as a tactical fighter, and when equipped additionally with heat-seeking Sidewinder missiles, as a day-night interceptor. Development of the F-104 began in 1952, and the first XF-104 made its initial flight in 1954. On May 18, 1958, an F-104A set a world speed record of 1,404.19 mph, and on Dec. 14, 1959, an F-104C set a world altitude record of 103,395 feet. The Starfighter was the first aircraft to hold simultaneous official world records for speed, altitude and time-to-climb.

The USAF procured about 300 Starfighters in one- and two-seat versions. In addition, more than 1,700 F-104s were built in the United States and abroad under the military aid program for various nations including Canada, West Germany, Italy, Norway, the Netherlands, Belgium, Denmark, Greece, Turkey, Spain, Taiwan and Japan.

The Royal Norwegian Air Force (RNoAF) received 18 surplus CF-104s and four CF-104Ds from Canada in 1974, the country had initially received 19 Canadair built F-104Gs and four TF-104Gs in 1963 under the Military Assistance Program. The F-104 was phased out of Norwegian service in winter 1982.

‘On 28 February 1979, I was launched from QRA at Bodø, leading another F-104G to investigate three Soviet Il-38 May anti-submarine aircraft that were operating in the Barents Sea, some 130km northeast of the North Cape. After identifying the ‘bogies’, we turned back towards our forward operating base at Banak in the northernmost part of Norway; this by now was some 240km away. I led us down to low-level to carry out a reconnaissance on some shipping on the return leg. At 200ft over the sea, we were out of radio contact with the GCI controller. Suddenly I caught sight of a contrail coming towards us, high above and almost on a reciprocal course. It was moving fast; should we go for it. A quick fuel check said ‘no’, but with over 2,000hrs operational experience on the F-104, my brain said ‘yes’. I told my wingman to shut down his radar, IFF and TACAN and follow me in silence. I gave him the sign to go into afterburner and we accelerated to 620kt. Then we pulled up into a slightly skewed ‘Immelman’, following a lead pursuit curve all the way up to whatever altitude we needed to catch the contact. Halfway through the manoeuvre we came back into radio coverage and the GCI controller suddenly broke in with some unnecessary chatter. It was very distracting, so I called ‘Judy’ (meaning that I did not need his help) and silence reigned once again. At this stage, my wingman fell out of formation and ended some trailing me by 16km, so I told him to head back towards Banak. The manoeuvre worked out perfectly for me since I arrived directly underneath the contact at 36,000ft and Mach 0.96. I could not believe my eyes: Was it really a Foxbat: Yes it was a MiG-25 Foxbat C. However, I was going in completely the wrong direction with my fuel getting critically low, but I knew that I had to take some photographs if I was going to be believed and took some ten images in around 15sec, ending up on his starboard side. Then he saw me and accelerated away, manoeuvring violently. I turned back towards the coast, picked up my wingman and we both landed at Banak with less fuel than I care to mention. Unfortunately, the GCI controller was given credit for the intercept, even though it had been a completely selfpositioned independent manoeuvre on my part. In reality it was only thanks to my own experience, judgement and also a healthy disrespect for fuel regulations – that we caught the Foxbat!’