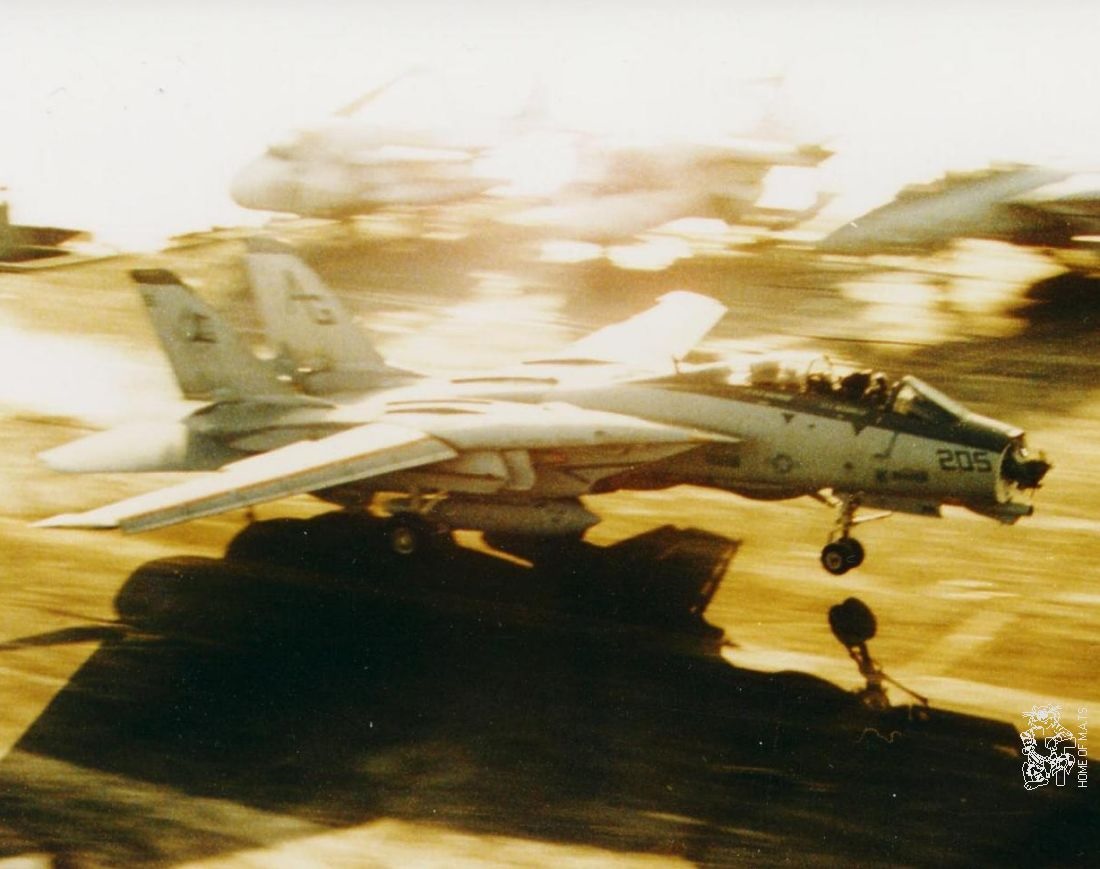 Taken on Nov. 13, 1991 the pictures in this post show U.S. Navy Grumman F-14B Tomcat (BuNo 161433) from Fighter Squadron 142 (VF-142) “Ghost Riders” aboard the aircraft carrier USS Dwight D. Eisenhower (CVN-69). The crew, LtCdr. Joe F. Edwards Lt.JG Scott C. Grundmeier, had to make an emergency landing when the nose cone came off because because of a latching mechanism failure at a height of 8,200 m over the Persian Gulf.

FDA: Do you feel comfortable talking about your F-14 convertible landing? The radome broke off, correct?

Joe: Yeah, there was a locking mechanism at the 6 o’clock position underneath the fuselage on the F-14 where you lock the radome down…radome is radar dome…there’s a flat radar antenna back behind there, and the locking mechanism had corroded and actually fell out into the ocean. We started the day with an ACM engagement about 25-35 miles from the ship with the CO of my squadron – Dick “Weasel” Gallagher. I ran the Operations and Maintenance departments for him during my department head tour in VF-142. Weasel is a great American and a great friend and we always had a fine time wrestling with each other during close-in dogfighting. Most importantly, I was flying that day with Scott “Grundy” Grundemier, a Naval Academy classmate of mine (and also a former squadron-mate, as was Weasel, in VF-143 a few years before this). Grundy was of the finest RIOs the Navy ever had, and his experience, headwork and decision making skills were critical to our ability to safely land the airplane on IKE. It’s too lengthy a story to tell here, but after landing on the ship, I found that my eye’s iris had prolapsed and extended out of my eye through a 3 mm cut in the cornea. I was medevac’d to the International Hospital of Bahrain where surgery was performed on my eye. I was released 10 days later. Anyway, we started an ACM engagement and as soon as I got a little G on the airplane, that [radar dome] failed..the hinge for the radome is at the 12 o’clock position and it was put there so that you could raise that thing up and sit it back on top of the airplane on a crowded carrier deck or hangar deck, so when that thing failed it rotated on its hinge and if you ever go to the [Udvar Hazy] Air and Space Museum here at Dulles, and you look at that radome [on the F-14] and you turn it 180 degrees, you see that the angle of attack probe is right in front of the pilot’s face, so that’s what hit me. It crashed through the canopy, that hit me in the face and took out my right eye, broke my collarbone…

FDA: What speed were you flying when that happened?

Joe: Ground speed we were going about 600 knots at 28,000 feet, so it was a loud boom, explosive decompression and the airplane was damaged, a lot of glass in the cockpit, a lot of glass in my eyes…so at 28,000 feet I didn’t have any oxygen and I didn’t realize it at the time. When it hit me in the face I’d probably be severely disfigured today had I not been wearing an oxygen mask; the plastic form of the oxygen mask was intact but I lost the hose, so I didn’t have any oxygen, I was breathing ambient air. So I quickly circled down, pulled the throttles to idle, put the boards out, circled down, didn’t have any canopy around me, couldn’t see out of the front of the airplane because the plexiglass was so cracked with pieces missing…the captain of the ship was a guy named Bill Cross and he became an admiral after that tour, and Admiral Cross…when I came by the ship at flight deck level, I couldn’t talk to anyone of course because I didn’t have any communications fittings going up to my microphone that’s still in the hard shell of my mask…so I dropped the gear, dropped the flaps, lowered the tailhook, came up the side of the ship to tell them I needed to land immediately, and Bill Cross immediately started turning the carrier back into the wind to give me a chance to recover the airplane. Of course I couldn’t talk to anyone, and I didn’t even know the nose of the airplane was missing because you can’t see it from the cockpit; it’s a Navy airplane, gotta be able to see the ship when you’re landing. So I did two practice approaches in the 10 minutes it took the aircraft carrier to turn around and steadied up on a base recovery course 322 degrees and I flew an approach and landed on the ship; trapped…that was my last carrier landing; I knew it was going to be because I was blind in my right eye, and I knew I’d never fly again. But, they medevac’d me out after a few hours and the helicopter landed there at night, I had two IV’s swinging, I was laying wrapped in stokes litter when a Navy nurse from San Diego, California, named Gail Little…met me at the helo, and we were on this ambulance riding through the narrow middle eastern streets like we were in the move “Raiders of the Lost Ark”, I actually told Gail to tell the ambulance driver I’m not going to die on the way to the hospital, but I might die if he wrecks the ambulance, he needs to slow down [laughter] so he slowed down, took me right into surgery…they sewed up a 3mm cut with six stitches and four years later I showed up to Johnson Space Center as an astronaut. We used to say sometimes it’s better to be lucky than good.

FDA: You hold the unofficial low altitude high speed record, is that something you can talk about?

Joe: This phrase came about one day while talking to a reporter about the performance of the F-14, particularly with the General Electric F-110 engines that were installed in the F-14B and F-14D models beginning in the late 1980’s. I had had a memorable multi-bogey engagement off NAS Oceana while in the Ghostriders – I think it was during our work ups just before DESERT SHIELD. Having just come off a tour flight testing the F-14B (which was actually designated the F-14A(Plus) at the time), I was pretty familiar with the airplane. Well, on this the last engagement of the day, our division blew through a group of five or six F-5’s, A-4’s and F-16’s. We shot a few of the bad guys and with all four of our airplanes intact, we bugged out, turning left and heading north in the general direction of Oceana. The F110’s were fantastic motors and while we left most of the bogey formation at the merge, one F-16N did their best to cut the corner and chase us down. I unloaded the airplane while slamming the throttles forward into full afterburner and we headed for the deck, accelerating through Mach 1 as fast as that airplane could take us. During the flight debrief, the VF-43 aggressor squadron crews were quite impressed with how quickly we left the fight, particularly Skip Zobel, a good friend who was flying the F-16N trying to catch us. (The F-16N was a lightweight, particularly high performing version the Viper.) During the debrief, no one but myself seemed to catch the digital readout of the airspeed and Mach number of our airplane displayed on the big screen, but we were flying at 935 knots calibrated airspeed (1.35 true Mach number) on the deck during the bugout. The book’s redline airspeed of the Tomcat was 780 knots. Anyway, I told that story to the reporter years ago and he remarked, “You know, I think that is an unofficial low altitude airspeed record!” So, that’s how that rumor came about, I think. Not that I need a reminder, but it is good [to] reminisce about the great friends we had in the fighter community – people who worked, played, deployed, fought and flew together. These were great people and I was so fortunate to be a part of that community.

FDA: And how low were you?

Joe: On the deck. [laughter] So, way outside the envelope of the airplane. When I came back to the squadron, I went back and looked at the airplanes airspeed indicator and [it was the] first time I realized that at 800 knots there was a little peg on the airspeed indicator to stop the thing from goin’ any farther. [laughter] So honestly, I really enjoyed flying that airplane. 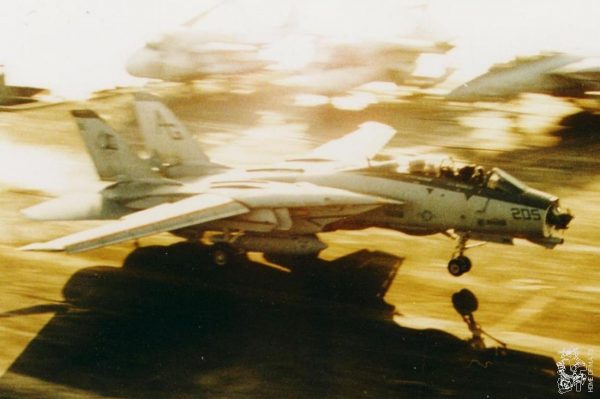 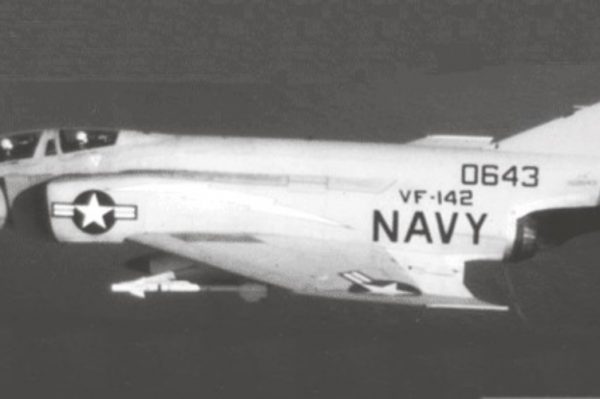