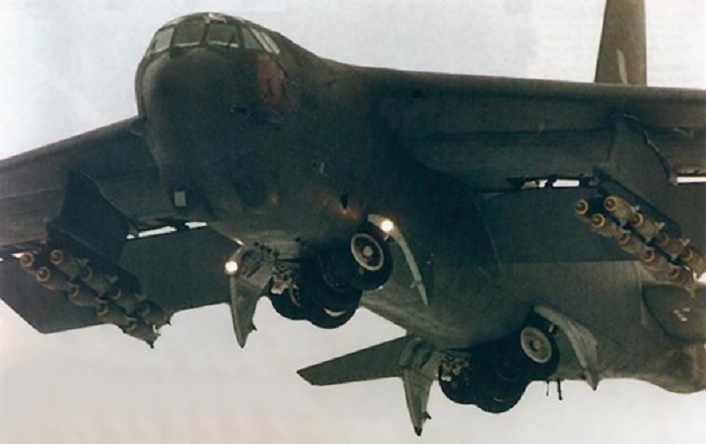 “The B-52 suddenly snapped nose down ten degrees, a horrendous and panic-inducing loss of control that promised to kill us all in about ten seconds as the moonlit pine forest below us filled the windscreen and rushed toward us,” Jay Lacklen, former B-52 pilot

Around the time my two pilot training IPs died in aircraft crashes, I nearly did, too—twice.

The first episode took place on a routine takeoff from Loring […]. As we rolled down the runway, we barely made our acceleration check, a certain speed that must be reached by a certain elapsed time or the takeoff must be aborted in order to stop in the remaining runway.

This alarmed me because we usually beat the time easily. After eating tip eight thousand feet of the eleven-thousand-foot runway, we remained thirty knots below rotation speed and were barely accelerating. Something was terribly wrong. I had pulled several of the throttles back slightly to match the prescribed takeoff power setting, but I now shoved all of them to the firewall. At least they’d know we gave it everything we had if we didn’t make it.

I looked down the remaining runway at the pine forest off the end, where it seemed we were about to meet a fiery and apocalyptic end. At this point, my mind began going haywire. Viewing the remaining three thousand feet of runway, I thought, in rising panic, that I could easily stop my car in this distance and perhaps I should try to abort on the runway. Fortunately, I also recalled an imperative John, my Castle IP had impressed on me: “When in doubt, continue the takeoff.” John’s advice saved us, because if I had as much as touched the brakes, we’d have died horribly in that pine forest.

As the end of the runway approached, I experienced my life flashing before my eyes — in an odd form. I pictured my family members and Boonie Bill’s dogs for some crazy reason and marveled, almost serenely, that I now knew where I would die—right off the end of this runway. At the last possible second, I pulled the yoke back hard into my stomach, not knowing if the plane had enough airspeed to respond. It did. We blew all the dust off the overrun and limped into the air barely above the treetops. I briefly considered ordering the crew to bail out since I still didn’t know what was wrong or if we could gain airspeed and stay airborne […]. But I realized the navigators, with downward ejection seats, did not have enough altitude for a successful escape. No, we would all make it or not, unless we approached a stall. At that point, I’d have to try to save the four of us upstairs, at least, and order the bailout.

When we turned onto the seventeen-mile arc as per the departure procedure, we were only 2,500 feet above the terrain. We should have been at ten thousand. The copilot’s eyes were wide as saucers when I dared to look at him. We had both thought we were dead. I aborted the mission, burned down my fuel to the maximum for landing, and put it on the deck with a demand for maintenance to meet us at the parking spot.

Upon later inspection, it turned out maintenance had mistakenly trimmed the four outboard engines to produce about 5% less than their full power. We might have caught this, but we normally concentrated on the two center-engine instruments that showed proper settings. The reduced outboard engine thrust was just sufficient to make our acceleration check but not enough to make our rotation speed before the end of the runway. Fortunately, the engines provided just enough power to save our skins.

That night, I visited the pizza restaurant not quite a mile off the end of the runway and just off the extended centerline. I sat down at the bat in my flight suit, but before I could speak, the owner exclaimed loudly to me that some idiot pilot almost tore the roof off the place that morning. I told him, yes, I know, and I knew exactly who that idiot was.

The second episode happened on a night low level over South Carolina. Things started on a shaky note. As the crew bus pulled up to the aircraft, I noticed the Deputy Commander for Maintenance (DCM) standing in front of the plane. This meant he would probably try to talk me into taking some maintenance problem they couldn’t fix. Sure enough, that is what he did.

He explained the plane had experienced runaway nose-up trim, where pitch controls ran to the upper limit, un-commanded, resulting in a sharp aircraft pitch-up while low level on its previous mission. He said they had replaced every part they could think of, but they never discovered what the problem had been, a classic C&D (could not duplicate) write-up. At any rate would I take the plane? I thought a pitch-up would not be catastrophic, even low level. Besides, they had probably fixed the problem, since they could not duplicate it. Sure, I said, we’ll take it.

The B-52 has a large, striped trim wheel by the aircraft commander’s right knee to make it obvious when the wheel is turning and the trim control device is running. The wheel often rotates steadily during configuration changes, such as putting down the flaps or landing gear. Having been warned that the trim flight controls might incorrectly run to the full nose up position, causing the plane to suddenly climb steeply, as it had before, I watched that wheel for unanticipated motion throughout the thirty minutes of the low-level run and on the first simulated bomb run. Nothing unusual happened. I mentally declared the problem solved, relieved to be done with it. I gave the copilot the plane for a climbing turn to the racetrack pattern used to set up for a second bomb run.

As the aircraft climbed from five hundred to eight hundred feet above the ground, I later vaguely recalled the trim wheel moving steadily. This was not unusual since we were slowing and climbing, and that would require a trim change. I did not notice that the trim was running the wrong direction, nose down, instead of the proper nose up. As the copilot leveled off at eight hundred feet, and I was busy reviewing my low-level chart, the aircraft suddenly snapped nose down ten degrees, a horrendous and panic-inducing loss of control that promised to kill us all in about ten seconds as the moonlit pine forest below us filled the windscreen and rushed toward us.

Reflexively, I grabbed the yoke and pulled, but nothing happened. It felt as if someone had poured concrete on it; it would not budge. That is because the copilot had already pulled the yoke to the full nose-up position and it could not move any farther. The low-level autopilot mode, which approximates power steering in a car, had tried to compensate for runaway nose-down trim. When it could no longer cope with the severe out-of-trim condition, it abruptly disconnected, allowing the out out-of-trim condition to take effect and allowing the nose to drop precipitously. The horizontal stabilizer on the tail, having trimmed full nose down, could not be overcome by the relatively less effective elevator controls that the copilot had already pulled to the full-up position […].

From the deck below, the navigators fairly screamed in the interphone, demanding to know what was wrong. They needed four hundred feet above the ground and level flight to get one swing in their parachute before they would hit the ground. We were now diving at the ground and closing on four hundred feet. By my command or not, they would have to eject shortly to save themselves. I tried to get my index finger to the interphone toggle on the yoke but could not manage it because I was pulling so hard on the immovable yoke. Even if I had been able to transmit, I couldn’t have told them anything, because I didn’t know what was wrong. Not knowing the copilot had already pulled the yoke to the full up position, I tried to grasp why the yoke would not move. Within a few seconds, I’d have to give the bailout command.

Fortunately, the copilot recognized that the trim was probably the problem since he was flying the aircraft when it ran away. He immediately began running his trim button nose up against the runaway nose-down command from the trim system. Slowly, he managed to overcome the erroneous command and to raise the trim to a slight nose-up position. As the aircraft nose rose above the horizon, I disconnected the automatic trim system for the remainder of the flight. From then on, I would trim manually with the trim wheel by my knee. Fool me once, shame on you.

The copilot, having saved our bacon, now hit the panic button and started shouting, “Mayday, mayday, mayday!” on the air traffic control frequency. I tried to stop him because I now, a few seconds belatedly, realized what had happened and knew we were OK once I killed the trim system.

Unfortunately, every aircraft and air traffic controller for a hundred miles started asking us for our situation. I couldn’t just say, “Oh, never remind,” so I explained we had suffered a runaway trim situation low level but we had now disconnected the system and seemed to be OK. Several aircraft continued to query us, apparently indignant that we had invoked the mayday distress code if we didn’t need help. I explained that the call was justified but that we had regained control, so no aid would be required. This would the only “mayday” call I heard in thirty-three years of flying, and it was my aircraft that made it.

I called Loring on HF radio and told the command post that the aircraft stood us on our nose, low level, but we seemed to have it under control and were aborting the mission and RTB-ing (returning to base). The DCM got to meet us that morning for our landing at 0400 to apologize for the aircraft he gave us. I’m sure he had the wing commander’s footprint on his ass.