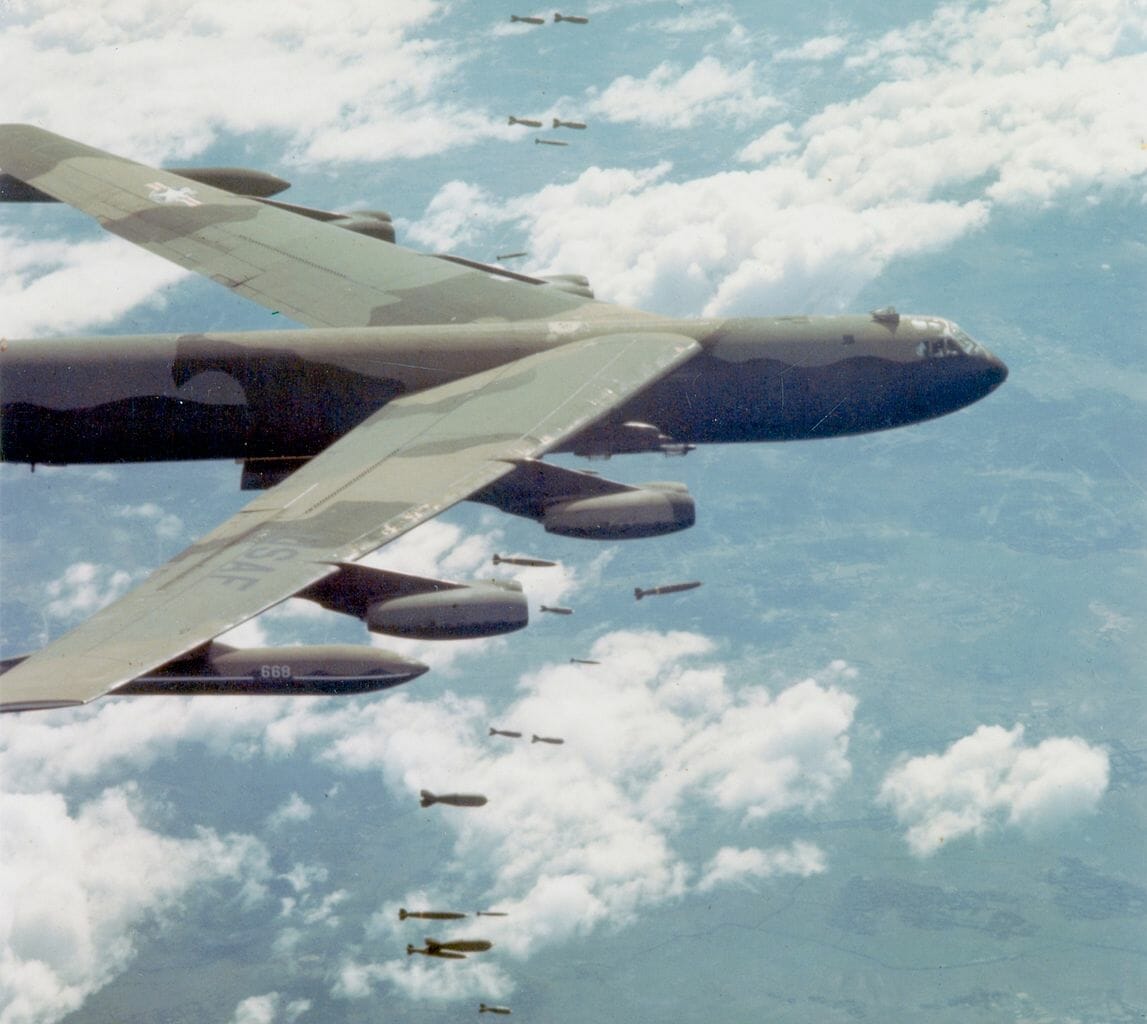 “Then the bomb run began in the early morning darkness over an Asian jungle. Our three-abreast, triangular-shaped formation banked steeply, ominously, onto the bomb run heading…,” Jay Lacklen, former B-52 pilot

Jay Lacklen is a retired Air Force reserve Lt Col with 12,500 flying hours who teaches Air Force pilot training simulators at Columbus Air Force Base (AFB), Mississippi. In addition to pilot training aircraft, he flew 330 hours in the C-7 Caribou, 2000 hours in the B-52 bomber, and 9,500 hours in the C-5 Galaxy transport. He flew in all major military actions from Vietnam to the 2003 Iraq War. In the following story, taken from “Flying the Line, an Air Force Pilot’s Journey, Pilot Training, Vietnam, SAC,” the first book of a trilogy, Lacklen takes you aboard his B-52D for a scary bomb run over Cambodia during the Vietnam War.

When asked if I killed anyone during the Vietnam War, I have to answer that I don’t know. I may have, and probably did, since my B-52 bomber crew dropped many thousand pounds of bombs on the Cambodian jungle, but I will never actually know.

I only flew two live bombing runs in August 1973, before President Nixon’s final bombing halt prior to the negotiations that ended our involvement in the war a few months later. But the first mission captured all the terror, anticipation, wonder, and angst of flying into a war.

The mission began after dark at Andersen AFB, Guam, in the western Pacific Ocean. The crew bus dropped us at the hot loading zone on a far corner of a field, a remote location that would provide some protection for the base if something went wrong while loading over fifty thousand pounds of bombs in the bomb bay and on wing pylons of our B-52D.

A full moon painted the bristling black war bird in a ghostly light, a formidable metal dragon that would righteously drop explosive mayhem onto America’s enemies, or so I thought at the time. I paused and slowly put down my flight bag to stare in awe. Was I really a part of this? What was I about to do?

Six hours after takeoff, we approached the target area over the Parrot’s Beak region of Cambodia as one of a half-dozen three-ship bomber formations. Each cell was named for a tree. We were Oak Flight; others were Pine, Maple, and Birch.

As the lead aircraft copilot for my cell (for some unknown reason, I got to be lead on my first mission), I had to announce the impending bomb drop on “Guard,” the international radio frequency all-aircraft monitor. This would allow aircraft in the vicinity to vacate the area and avoid the “rain” of our falling bombs. (As an aside, this is the same rain referenced in the Creedence Clearwater Revival song “Have You Ever Seen the Rain?”)

Then the bomb run began in the early morning darkness over an Asian jungle. Our three-abreast, triangular-shaped formation banked steeply, ominously, onto the bomb run heading. The radar navigator, who would throw the switch to drop the bombs, informed the crew we were approaching the IP, or Initial Point, to begin the run.

Just as we passed the IP, a male Asian voice began transmitting in Cambodian on our radios. He sounded as if he were babbling in an opium den, and his voice disturbed and frightened me. I feared he might be an apparition warning us off our task, a voice of doom giving a last opportunity to save ourselves, or a soon-to-be victim in the target zone making his last hopeless statement to his slayers. He continued talking, as if relating a story to a fellow opium smoker, while our formation approached the target. No matter what I did to my radio controls, I couldn’t make the voice stop.

In the near distance 33,000 feet below us, the ground glowed red, eerily, from explosions from preceding bomber formations. A mist hung over the terrain that gave the area the look of a graveyard in a horror movie.

The aircraft shuddered lightly as the bombs unhooked from the wings and dropped from the bomb bays of our three aircraft in a ten-second release sequence that would obliterate an area equal to three football fields and unleash a shock wave that would kill any unshielded creature within half a mile. North Vietnamese soldier and author Bao Ninh later wrote that the immediate aftermath of such a strike resulted in “a rain of arms and legs dropping before him on the grass.

We waited as the radar navigator counted down to detonation, about fifty seconds for the bombs to fall 33,000 feet, “Three . . . two . . . one . . . impact!” The thin clouds around our aircraft reflected hundreds of small bursts of light from below. It was done.

The radar navigator announced the closing of the bomb bay doors.

We flew on in the darkness in silence as I pondered what we had done. I ponder it still.”