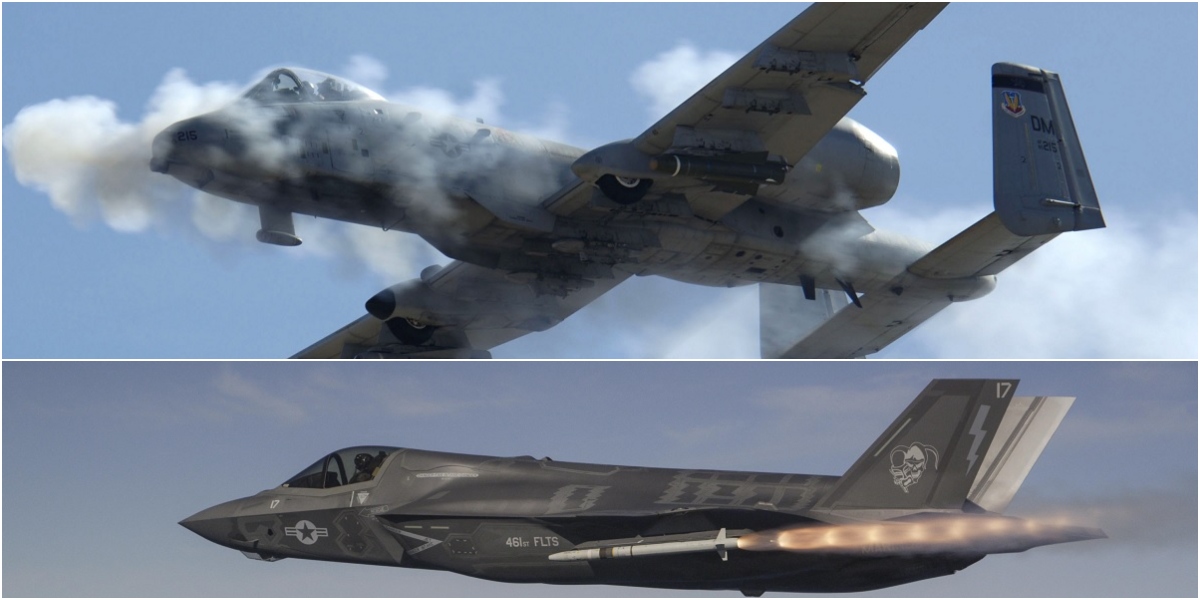 “I’d pick the Hawg. And I’d be forever grateful that the F-35 had gone through first to clear the air for the Hawg to do what it does best,” Lynn Taylor.

Testers pitted the planes against anti-aircraft weapons, man-portable air defense systems, and moving targets like radar-guided surface-to-air missiles. Each aircraft flew during the day and night, and were vetted in urban environments. One segment involved a downed crew member and required collaboration with other platforms like the HH-60.

During the testing phase, the F-35 proved to be a valuable CAS asset.

“The F-35, as we expected, has a big advantage in a high-threat scenario where the stealth and sensor fusion really help,” Robert Behler, the Defense Department’s director of operational test and evaluation, pointed out. “In a lesser threat environment, we were able to put more weapons on the wings of the F-35, so we were able to get much better loads on the aircraft.”

Comparatively, the A-10 performed well with more fuel and more weapons in a low-threat environment.

“One thing that can’t be overlooked is that there’s 40 years of experience close to the ground with the A-10,” Behler said. “Training really matters. We had, in the second part of the testing in March, we had former A-10 pilots that are now part of the F-35 force.”

“I had a neighbor who flies the F-35. As we were sitting around one afternoon, we naturally talked about flying and, me being a Hawg guy, I had to ask how well the F-35 does in the CAS role,” says Lynn Taylor, A-10 Pilot, Joint Firepower Course Instructor, Air Liaison Officer, on Quora.

“I had a neighbor who flies the F-35. As we were sitting around one afternoon, we naturally talked about flying and, me being a Hawg guy, I had to ask how well the F-35 does in the CAS role,” says Lynn Taylor, A-10 Pilot, Joint Firepower Course Instructor, Air Liaison Officer, on Quora.

“Don’t get me wrong. The F-35 is a very capable bird,” Taylor explains. “Especially in the air superiority and strike roles. In fact, it’s quite possibly the perfect tool for taking apart the enemy’s pesky integrated air defense systems (IADS).

“The F-35 can certainly perform the CAS mission, and it does a pretty good job. Heck, we even have the venerable B-52 performing CAS now.

“Anyway… I think this piece is what folks typically miss when it comes to close air support: CAS birds never fight alone.”

What do you need for effective close air support?

Taylor continues. “The U.S. military’s own airpower doctrine on CAS lists as ‘conditions for effective close air support’ (among other things):

“There’s always been an infatuation with the perceived power of enemy air defenses. The power of IADS is the chief concern I run into whenever someone says the Hawg doesn’t belong on the modern battlefield, and I think it’s the primary driver of today’s love affair with stealth technology.”

Stealth isn’t the only solution to deal with threats

“Fortunately, there are those who are familiar with the full orchestra of instruments of airpower who point out that defeating modern air defenses is achievable with smart strategies, not only stealth and standoff,” Taylor says. “Written by none other than Gen. John Michael Loh, former U.S. Air Force vice chief of staff and former commander of Air Combat Command, his article effectively and eloquently explains that,

‘A brief look back at previous air campaigns against sophisticated IADS vindicates the effectiveness of rollback strategies to achieve total, permanent air dominance.’

“Those who protest that U.S. forces will be in a situation where ground troops are fighting under an active IADS umbrella are arguing from a point outside of how the U.S. actually fights. It takes a while for Big Army to build up and get everything in position. While the ground troops are getting in position, the air arm can get to work preparing the battlefield.

“Even if we wait until the ground fight is imminent before we unleash the air arm, you can bet that strike packages will do a lot of disassembly of the enemy’s vaunted IADS before the first boot steps across the line.

“On top of that, we also have tools available to provide localized suppression (or destruction) of enemy air defenses for any stragglers we need to clean up after the ground war starts.”

The Hawg has improved its tactics, techniques, and technology

“A persistent myth about the Hawg is that it flies ‘low and slow’,” Taylor explains. “As fun as it is to say those words together, the Hawg doesn’t typically operate that way anymore. With upgrades to its precision strike capability, it can now sling JDAMs from high and outside like its more pointy-nosed brethren. Laser-guided rockets are another great new piece of kit. And let’s not forget the AGM-65 Maverick missile. That thing has a great standoff range.

“Up in that area of the sky, one CAS bird is much like another. One point I love to emphasize is that a fighter or bomber is nothing more than a weapons delivery platform. It often doesn’t matter what kind of truck delivers the mail, as long as the right kind of mail gets to its intended receiver.”

When you need to get down and dirty, though…

“Sometimes, though — even in today’s high-tech battlefield — you need to get down in the threat area to get the job done,” Taylor explains.

“What can drive you down there? Weather mostly. But sometimes you need to use a particular kind of weapon under specific conditions that necessitate hanging your backside out where it can get shot at.

“Sometimes the boots on the ground don’t have the luxury of transmitting grid coordinates that get plugged into a JDAM that gets lobbed from the ionosphere, sight unseen.

“When they are fighting for their lives, withdrawing under withering fire, under a low cloud deck, against a moving enemy, that’s when you MUST be able to get down in the weeds with them, get eyes on, and do your job as a professional CAS pilot to save their lives.

“Here an example of that exact situation:

“And here’s another one: DFC with Valor: A-10C pilot recognized for heroism in combat. Note that these guys got pulled way outside of their assigned area to deal with this particular situation. My guess is that there were other jets closer, but none of them could get under the cloud deck in a narrow valley to get the job done.”

“Ah, yes. The bogeyman of the battlefield.

“TL;DR: MANPADS won’t keep the Hawg on the bench. Yes, they are a pain. Yes, you want to avoid getting hit by one. But if you apply proper tactics, techniques, and procedures while doing your job, the odds of getting hit go down significantly.

It’s all about battlefield effects

“As an Airborne Forward Air Controller and Air Liaison Officer, I’ve controlled aircraft from the air and the ground. Part of my job was knowing the capabilities and limitations of friendly aircraft, weapon systems, and enemy air defense systems,” Taylor points out.

“If I’m on the ground and up to my eyeballs in hurt, I’m really going to be happy with anything that shows up to help me survive the fight. There may even be times when a B-52 would be my delivery truck of choice.”

“But, if I had to pick only one jet that I had to rely on to pull my fat out of the fire every time…

“And I’d be forever grateful that the F-35 had gone through first to clear the air for the Hawg to do what it does best.” 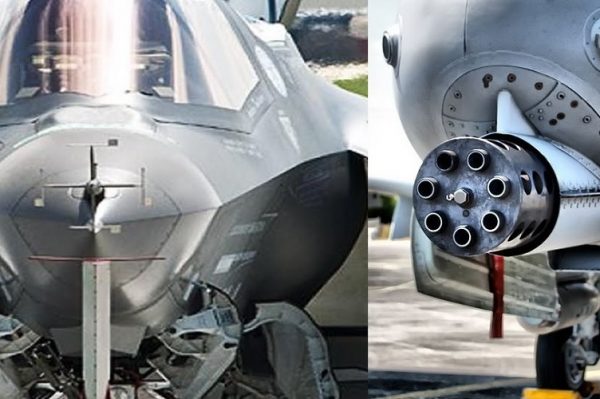 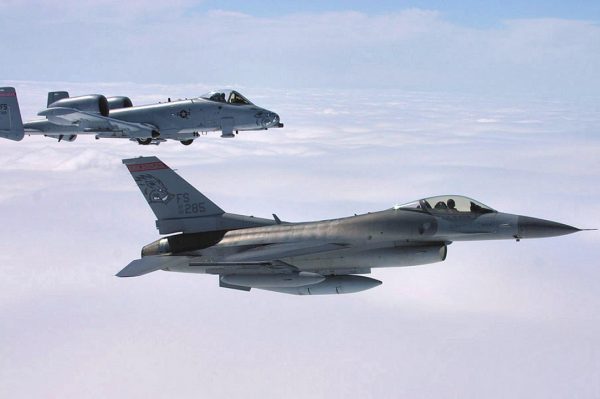