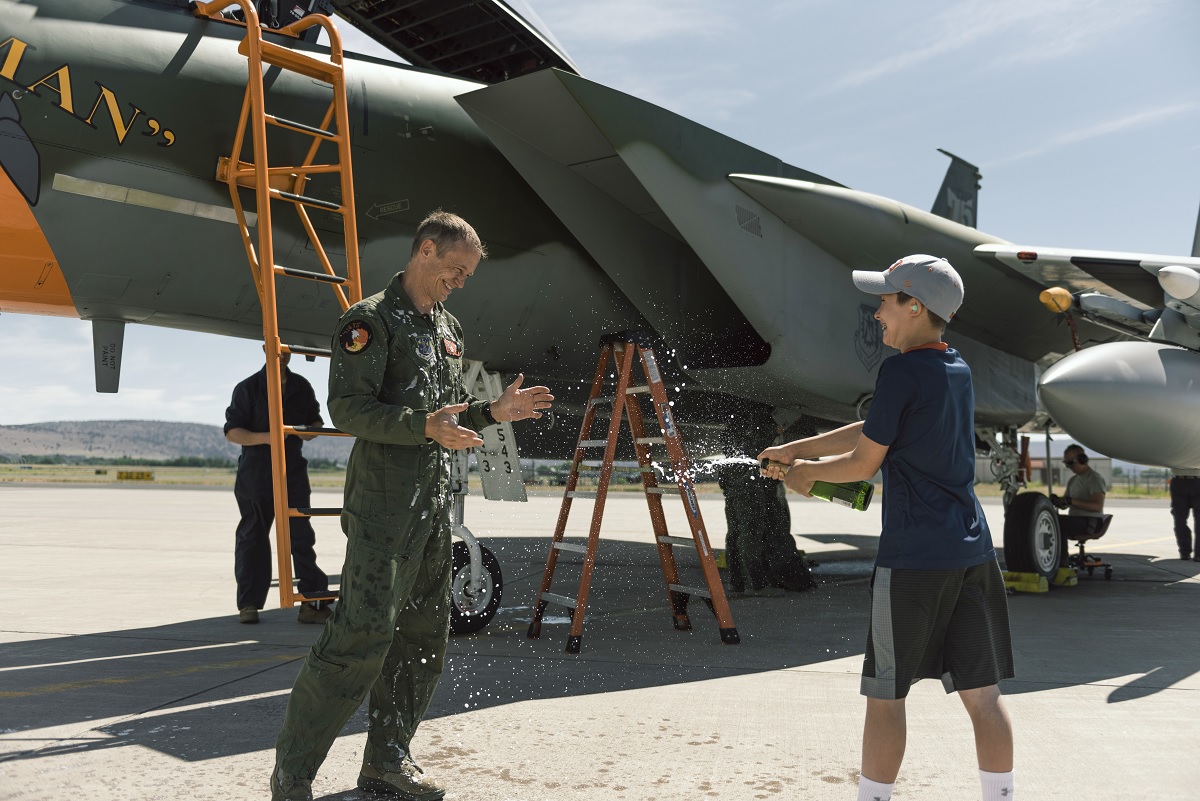 US Air Force Col. Geoffrey Jensen, the 173rd Operations Group commander, has achieved a number of milestones in the last 22 years. As explained by Senior Airman Adam Smith, 173rd Fighter Wing, in the article Kingsley pilot accomplishes 3000th flight hour in F-15 Eagle, most recently he reached the 3,000th hour behind the stick in the F-15 Eagle on Jun. 26, 2020, a new summit for this “Eagle Driver”.

A Houston native, Jensen said the flying bug has been in his blood since he was a boy. “My dad flew F-4’s, and I grew up watching him fly. So pretty much from the beginning I knew I wanted to fly the F-15.”

Military aviation is a family tradition – Jensen’s identical twin flies the F-16 Fighting Falcon, commonly known as the Viper, and their sister flies the KC-135 Stratotanker.

As a young child, Jensen said he knew fighters were his destiny. “I was always interested in aerial combat,” he said with a smile.

In 1998 he made it official, exiting the United States Air Force Academy as a distinguished graduate and moving on through the US Air Force pilot pipeline. He was again named Distinguished Graduate upon graduating from Introduction to Fighter Fundamentals, and graduated top of his class in his flying training unit, where he learned to fly the Eagle.

Jensen is also a graduate of the US Air Force Fighter Weapons School, an accomplishment he describes as a highlight of his career. “Not a lot of people get to do that.”

After flying for the Active Duty Air Force for 11 years, he joined the Team Kingsley and the Oregon Air National Guard in 2009.

“I was looking to slow things down for my family, and get the opportunity to fly the F-15, which is what I love,” said Jensen.

He has since risen to rank of colonel and now commands the operations group. As the operations group commander, his job is to manage pilot training, maintain the readiness of all essential gear and equipment, and support local missions through the 270th Air Traffic Control Squadron.

From Distinguished Graduate, to Weapons School graduate, to 3,000 hour F-15 instructor pilot, Jensen says that none his achievements come from any innately unique talent. “To me it’s all about hard work and preparation. I don’t claim any special skill or ability over anyone else, but over my career I’ve always relied on solid preparation.”

To him, preparation is key. “My motto is to over-prepare for everything, so that way I can always do well and make up for any lack of skill that I might have.”

Throughout the interview he credited the many Airmen behind the scenes. “It really takes a team,” said Jensen. “Time and a team, I would say. I feel like all I did to get this [3,000 hours] was just get old. I think maintenance and support should get a lot of credit for providing a safe aircraft every day, and helping me get up and get back.”

After flying for more than 22 years, Jensen says he is ready to retire. “I’m looking to see what the next chapter holds, another career, I suppose.”