“The result was the two Fox-1s and three unobserved gun kills by us. They had no valid shots,” Andy Bush, former F-104 Starfighter pilot.

Known as “the missile with a man in it,” the stubby-winged Lockheed F-104 Starfighter was the first US jet fighter in service to fly Mach 2, twice the speed of sound. Designed as a high-performance day fighter, the F-104 had excellent acceleration and top speed, according to Smithsonian website. Armed with a six-barrel M-61 20mm Vulcan cannon, it served as a tactical fighter, and when equipped additionally with heat-seeking Sidewinder missiles, as a day-night interceptor.

The Starfighter could held its own also against more modern fighters thanks to its speed and vertical climb, as former F-104 pilot and instructor in the USAF Fighter Weapons School (FWS), Andy Bush, recalls:

“I don’t know when the first instance of the F-104 and the F-15 engaging in DACT happened…but I do know when it happened early on at Luke.

“When the F-15 training operation began at Luke in the latter 70s, the initial squadron was the 555th, known as ‘the Nickle’. Sometime in 78 or so, the Nickle guys were looking for DACT with a variety of fighter types, and so they came down the street to the F-104 Fighter Weapons School in the 69 TFTS, also at Luke.

“They wanted to fly against us, and so we agreed to put up a two ship for a trial mission. Two FWS instructors were selected, one a German instructor (Hartmut Troehler) and one USAF instructor (me).

“The Nickle hosted the mission. We briefed at their squadron with two of their instructors (both F-4 FWS grads). They were going to use the two seat model for the engagement. We would both have dedicated GCI. We were to simulate Floggers…not a bad idea since the G model that we flew was a good representation of the A2A capability of the MiG-23. Our simulated armament was to be Apex, Aphid, and the gun.

“After the main briefing, Hartmut and I had our own briefing. I was the flight lead and intended to use as much deception as I could. We knew that the F-15 guys were really proud of their radar capabilities…the PD radar was new to the fighter community at that time. I thought that the two Nickle guys would be heavily relying on their radar to enter the fight…as it turned out, I was right.

“My plan was to put Hartmut in close formation and run head on at the F-15 using GCI for vectoring. Our radar could search out to 40nm but we couldn’t lock on until 20nm.”

“We took the first GCI vector and accelerated through the mach. Intended to fight fast…high speed extensions and hook turns. At 20nm, the F-15 made a large blip on my radar and I was able to get a lock. The plan was to Fox-1 at about 16nm and then have Hartmut peel off into a hard 360 to follow me.

“I called the Apex at 16nm, told Hartmut to deploy, and then pushed it up to over 700KIAS. My hope was that the Eagle guys would hold their lock on me and not see Hartmut separate. We could slave our gunsight to the radar lock on angle…this let me fly right at the F-15. I picked him up visually…he was high, to the right, and had started a conversion turn. I unloaded, and extended away figuring they would try to follow…and they did.

“What that did, of course, was get them sandwiched between me and Hartmut. My guess was that they would get all excited and jump on me without asking where my wingman was. They found out soon enough as their GCI relayed to them Hartmut’s gun attack call.

“I was looking back and saw their break turn that resulted. I went idle and boards, slowed to .85M, dropped my maneuver flaps, put my lift vector on the Eagle and then pulled the jet into a hard 7g turn using burner to hold my speed. I knew I could sustain that g at around 400KIAS.

“I pulled into a lead snapshot position on the Eagle, closed in and went guns. The Eagle broke again as their GCI relayed the second gun call.

“By this time, Hartmut was pitching back into the fight. He saw me extend away, went in for his second gun attack, and then extended away after me. I tallyed him, gave him a check turn to put us back into line abreast and then we became a dot.

“The Eagle tried to call a Fox-2 as we separated but with us well over 700KIAS, it was way out of parameters.

“The result was the two Fox-1s and three unobserved gun kills by us. They had no valid shots. 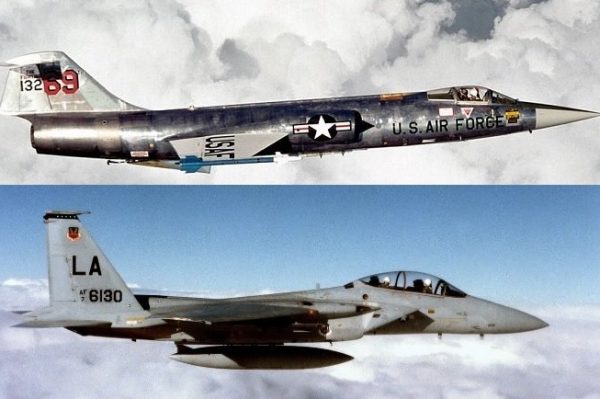