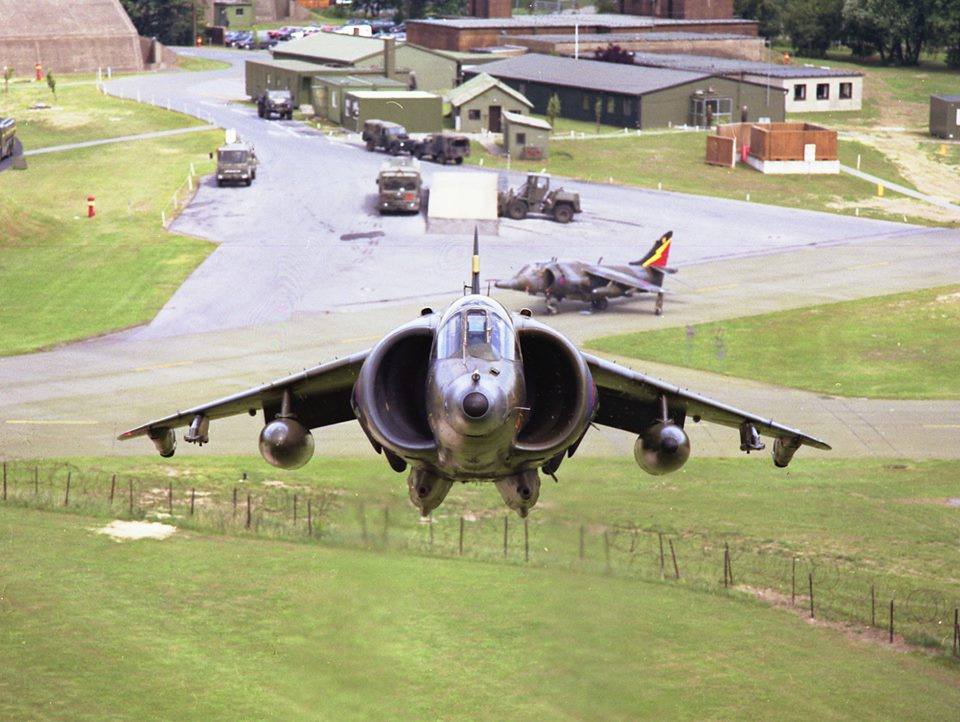 “The thrill of rising vertically on a column of thrust from a wooded site is an exhilarating experience…whether it’s the first time or the hundredth!,” Chuck deVlaming, USAF exchange pilot who flew with RAF No. 1 Squadron Harrier jump jets

Called Harrier Strike and Survive, the cool promotional video in this post shows how the legendary jump jet was able to operate close to the battlefield thanks to its amazing Vertical/Short Take Off and Landing (V/STOL) capability.

Some insight into Harrier V/STOL operations are provided in Don Linn book Harrier In Action which features a unique interview with Capt. Chuck deVlaming, a U.S. Air Force (USAF) exchange pilot who had the chance to fly Harrier with Royal Air Force (RAF) No.1 Squadron in the early 1980s. Before deVlaming entered the RAF exchange program, he had already accumulated over 2,000 hours in single seat, single engine jet fighters, and had two combat tours in Vietnam, flying F-105D Thunderchiefs in his first tour, and A-7D Corsair IIs in his second.

“My experience with the RAF includes nine months of lead-in training, during which, I received Orientation Training in the Jet Provost, Tactical Training in the Hunter, and an introduction to hovering in the Westland helicopter before going on to the Harrier. After completing the six month Harrier Training Course I was assigned to No. 1 (F) Squadron. The Harrier is a very unique aircraft having the qualities and performance of both a helicopters and a high performance jet fighter. Without question the Harrier is unequalled in it’s V/STOL mode of operation. During the war when conventional fighters are grounded because of damaged runways, the Harrier can fight on!

“The Harrier is subsonic not because of its thrust to weight ratio, which is greater than 1:1, but because of the drag created by its huge air intakes. The intakes had to be designed to accommodate the mammoth volume of air required by the engine during V/STOL operations. The Harrier has a high wing loading which results in degraded turning performance; a wing design which could have resulted in greater turning capability, would have created more weight and drag, and would have reduced speed and V/STOL capability.

“The tactics and operating concepts employed by the RAF do much to enhance the Harrier’s unique capabilities, the Harrier is designed to operate close to the ‘battlefield’ from hidden locations (hides), using roads, or if necessary grass strips for take-offs and landings. The Harrier is designed to fly a mission an hour with the pilot remaining in the cockpit between sorties and flying up to six missions per day. These capabilities and operating tactics reduce the need for high speed, long endurance and a large war load. The Harrier is operated at very low altitudes where the threat of enemy air attack is reduced. One must keep in mind that the Harrier is optimised for Ground Attack, not Air to Air combat, thus speed and turning capability are not as essential as they are for an Air to Air fighter. In short, the Harrier can operate any place, anytime; it is one of the most flexible and responsive Ground Attack Fighters in the world.

“Many people have asked me what it is like to fly the Harrier and to be a Yank in the RAF. My answer is always the same. MAGIC! Because for me it is a boyhood dream that really did come true. The thrill of rising vertically on a column of thrust from a wooded site is an exhilarating experience…whether it’s the first time or the hundredth!”