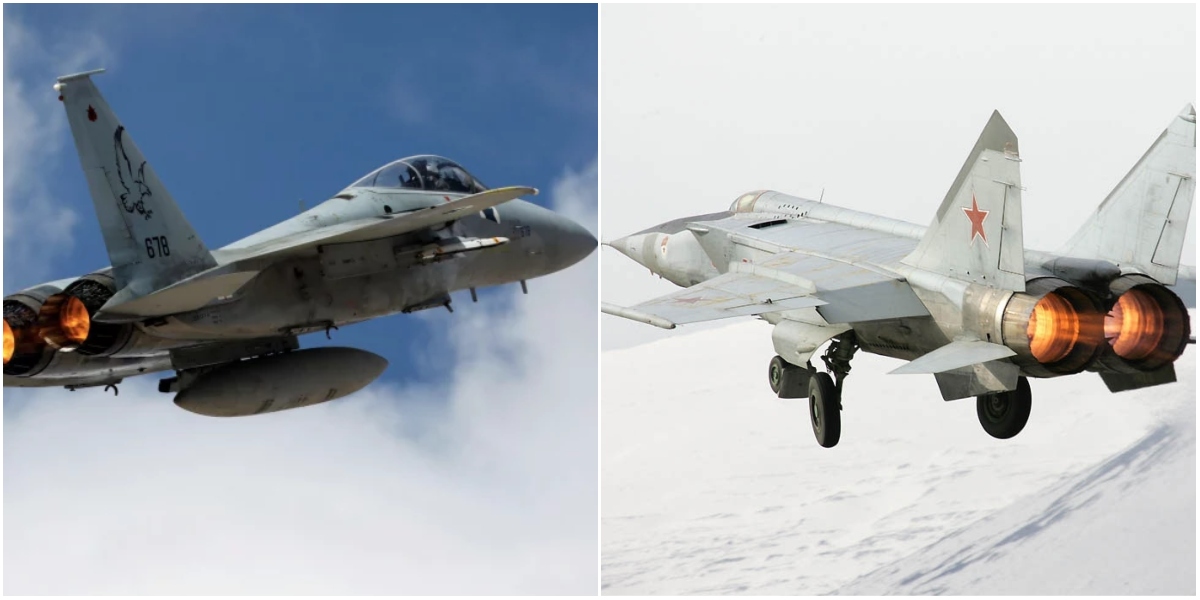 The best aircraft that the USSR could supply to the Syrians to counter Israeli fighters was the MiG-25P ‘Foxbat-E’ interceptor, and Syria became the first export customer for the world’s fastest interceptor in late 1979.

Bought in the mid-1970s to secure air superiority for Israel in the Middle East for decades to come, the F-15 Eagle has indeed been the unrivalled master of the skies since its arrival in December 1976. The fighter claimed its first kills three years later in the disputed airspace over southern Lebanon, when the IDF/AF skirmished with the Syrian Air Force (SyAAF).

Syrian MiG-21 and MiG-23 pilots knew that their mounts were totally outclassed by Israeli F-15s, yet they remained committed to combat with the IDF/AF.

As explained by Shlomo Aloni in his book Israeli F-15 Eagle Units in Combat, desperately seeking some kind of aerial victory, the SyAAF focused its efforts on an operational scenario in which its pilots had some hope of inflicting damage on the IDF/AF — the destruction of an RF-4E over Lebanon. Although the latter appeared to be easy prey, lacking any form of defensive armament, these aircraft were high value assets that never ventured outside Israeli airspace without a multi-layered CAP in close attendance. The RF-4E’s flightpath was also closely monitored by the IDF/AF’s all-seeing ground-based radar system.

The Israelis successfully frustrated Syrian attempts to intercept the reconnaissance aircraft with their MiG-21s, as the latter could not climb fast enough to attack the high-flying RF-4Es with their WVR AAMs — the SyAAF fighters lacked BVR capability. Even the MiG-23 struggled to catch the Phantom II, although the ‘Flogger-G’s’ ability to fire BVR AAMs made it a more deadly foe.

The best aircraft that the USSR could supply to the SyAAF for this type of mission was the MiG-25P ‘Foxbat-E’ interceptor, and Syria became the first export customer for the world’s fastest interceptor in late 1979. Once Arab pilots had achieved initial operational capability with the MiG-25, they were immediately tasked with putting an end to RF-4E overflights of Lebanon.

The close monitoring of Syrian airspace by IDF/AF COMINT and SIGINT stations had revealed the introduction of the MiG-25 into frontline service in late 1980, and from the following month onwards, these same sources detected several SyAAF attempts to intercept RF-4Es with the ‘Foxbat-E’. As usual, the Israelis responded to this new threat by ordering an ambush mission to be flown.

Double Tail Squadron commander Benny Zinker was chosen to fly Baz 672 as the leader of the CAP charged with protecting an RF-4C on Feb. 13, 1981. The weather was very poor, and the Israeli pilots were skeptical that the SyAAF would attempt an interception in such conditions. BVR missiles work just as well in poor weather, however, and soon the IDF/AF’s radar network had acquired a target. David Ivry, who was IDF/AF commander from 1977 to 1982, recalled;

`The Syrian fighter was flying an interception course, accelerating very fast. The distances between the radar blips were such that it was obvious that the fighter was either a MiG-23 or a MiG-25.’

The Baz pilots were flying over the Sea of Galilee when they were notified that a Syrian interceptor had been scrambled. Although climbing through 30,000 ft, and still some 70 miles away from the leading Baz, the MiG was locked up by the radar in Zinker’s jet. A vector to engage soon followed from the GCU tracking the SyAAF fighter, and the order was also given for the RF-4E crew to abort its reconnaissance mission. By now the leading pair of Baz fighters was over the town of Kiryat Shmona, and just short of the Israeli-Lebanese border. Zinker zoom-climbed to 50,000 ft, but then descended in order to remain below the Syrian jet.

Sticking to his preflight brief, Zinker launched his first AIM-7F at a range of 25 miles and his second immediately afterwards, by which point the jets were within 21 miles of each other. Zinker then hesitated momentarily, before launching a third Sparrow on his own initiative in order to make sure of his kill. Moments later there was a huge explosion, and Zinker noticed a lot of debris, although it was impossible for him to identify exactly what type of Syrian interceptor he had destroyed from such a distance. By now the Israeli pilot was flying over Syrian territory, so he quickly turned west and headed in the direction of the second Baz pair that had taken off with him. The kill was definite, but the identity of the Syrian interceptor was still unknown.

A Soviet delegation was sent out to Syria to debrief the SyAAF soon after the Feb. 13, 1981 clash, and almost two weeks after the combat had taken place, it was reported that the jet shot down over Lebanon had indeed been a MiG-25P.

In June 1981 whilst the Israeli government dealt with the criticism that came its way from around the globe following the Osirak strike, the IDF/AF returned to bombing targets closer to home in southern Lebanon. July saw a dramatic increase in the number of sorties being flown, with multiple strike missions taking place on a daily basis from the 10th through to the 23rd. The PLO responded by using artillery pieces that it had hidden throughout southern Lebanon to shell Israel.

The only attempt made by the SyAAF to intercept an attack mission came on Jul. 14, and it ended with the destruction of a MiG-21 by an F-16. US mediation then yielded a ceasefire between Israel and the PLO that lasted almost a year.

In line with the agreement, the IDF/AF refrained from flying attack missions over southern Lebanon during this period. However, reconnaissance overflights continued unabated, and on Jul. 29, 1981, having failed to defend the PLO for much of the renewed fighting, the SyAAF tried to restore some pride by intercepting an RF-4E.

The Syrians vectored two MiG-21s and a pair of MiG-25s onto a Phantom II nearing the end of its mission over southern Lebanon, and Double Tail Squadron reserve pilot Shaul Simon (in Baz 673) responded to their move with a single AIM-7F, fired WVR. The missile chased down its target in a matter of seconds, destroying a ‘Foxbat-E’.

The MiG formations had split up just prior to the Sparrow reaching its target, so the two F-15s were vectored onto the pair of MiG-21s that were fleeing eastwards in the direction of the Syrian border. Unable to get within missile-firing distance, the F-15 pilots gave up the chase and turned towards Israel.

The pilot of the sole surviving MiG-25, who had been waiting patiently for the Bazs to break off their pursuit, launched two BVR AAMs at the F-15s moments after they had pointed their noses south. Evading the missiles, the Israeli pilots then attempted to chase down the second `Foxbat-E’, but the big fighter easily accelerated away from them. 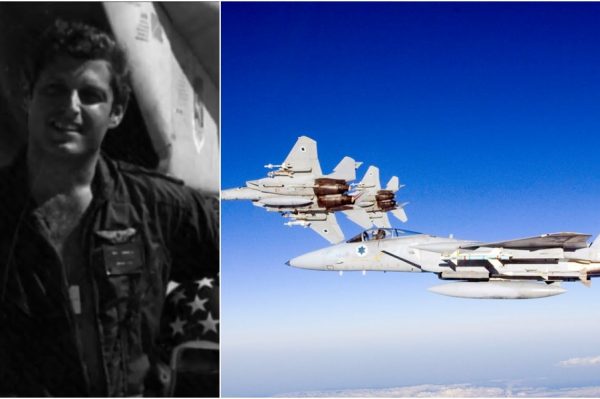 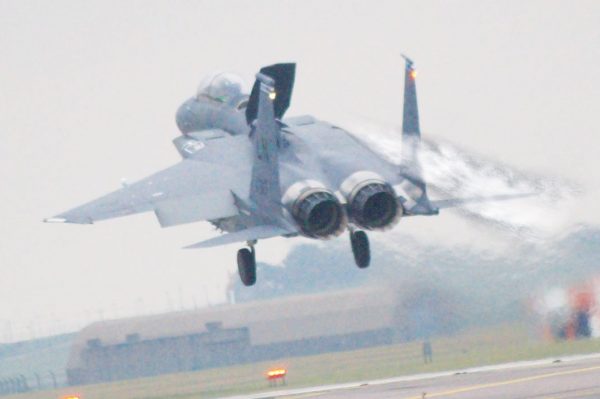 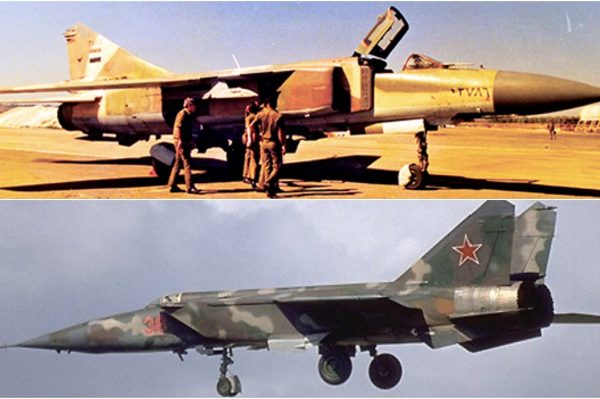