Log In Sign Up
Homepage Aviation HistoryDuring WW II SBD Dauntless crews were officially credited with an astonishing 138 aerial victories, 106 of them Zero-sens, but these totals suffer from overclaiming. Here’s why. 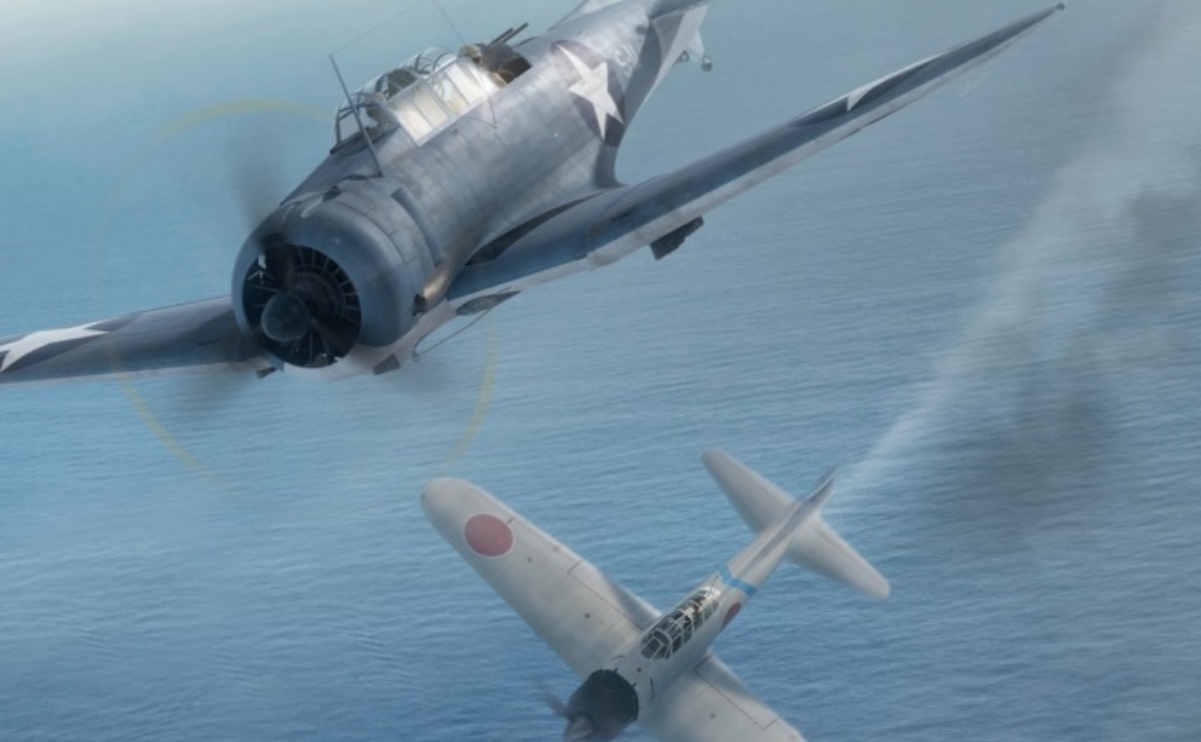 During WW II SBD Dauntless crews were officially credited with an astonishing 138 aerial victories, 106 of them Zero-sens, but these totals suffer from overclaiming. Here’s why.

The Dauntless holds a unique place in naval aviation combat history. Its success was attributed to a number of variables not found with other bombers of World War II.

The Dauntless holds a unique place in naval aviation combat history. Its success was attributed to a number of variables not found with other bombers of World War II. Its loss rate was the lowest of all US Navy aircraft in the Pacific War. SBD crews were officially credited with an astonishing 138 aerial victories, 106 of them Zero-sens. Of the latter figure, 88 were shot down in 1942, 13 in 1943, and five in 1944. Although the vast majority of these successes were credited to US Navy units, land based US Marine Corps SBD squadrons were officially credited with 30 victories over Guadalcanal and during the Battle of Midway in 1942 (again, these were mostly Zero sens), and a further 11 in the central and upper Solomons battles of 1943–44. These are incredible totals, but they suffer greatly from overclaiming.

As explained by Donald Nijboer in his book SBD Dauntless Vs A6M Zero-sen, Pacific Theater 1941-44, the extensive research by highly respected Pacific War historians John Lundstrom, James Sawruk, and Richard Frank has shown that the actual number of Zero sens shot down by SBD crews was between five and nine in the first year of the war. During 1942, IJN carrier air groups lost 57 Zero sens in aerial combat. From Aug. 7 to Nov. 15, 1942, land based 11th Koku Kantai lost 72 Zero sens in aerial combat during the Guadalcanal campaign. For US Navy and US Marine Corps SBDs to have destroyed 88 fighters in 1942 is unrealistic. That would leave just 42 Zero sens destroyed by F4Fs for a loss off 111 Wildcats.

All bombers in World War II were vulnerable to fighter attack, no matter how many machine guns were fitted. This meant they all needed fighter escorts to survive. The SBD was no different. Even though it had reasonable armament, armor plate, and self sealing fuel tanks, and squadrons implemented good formation tactics, it was still vulnerable to determined fighter attacks.

The high number of air to air victories attributed to SBD crews is a clear case of overclaiming. IJNAF Zero-sen pilots were just as guilty, and the reasons were many and the same. For the most part, air to air combat was fleeting and confusing, lasting minutes, with just a few seconds’ firing time at an enemy aircraft. In some cases, however, SBDs fought low level running battles with Zero sens lasting more than 20 minutes. In that time, it was not unusual for more than one pilot or radioman gunner to shoot at the same aircraft, both making a claim. In many cases, pilots and radioman gunners saw what they wanted to see. The Zero sen’s lack of armor and self sealing fuel tanks often meant that a flash of flame or trail of smoke was considered a victory. Many Zero sens that were seen to “explode in flames” survived, only to have the flames extinguished at a lower altitude.

Gun camera film was virtually non existent, and when it was available, the results were not always as definitive as one would hope. Atmospheric conditions also played their part, as the humid weather over Guadalcanal often meant a tight turning aircraft produced vapor trails that could be easily confused for smoke.

Aircraft recognition was another problem. Like their American counterparts, IJNAF carrier based aircraft were powered by radial engines. A number of times, SBD crews mistook Zero sens for B5N2s or D3A1s. In an extreme case of misidentification, US Navy pilots reported seeing “Me 109s” during the Battle of Midway. One Naval Aviator from VB 3 stated:

‘Enemy evidently had large force of fighters on patrol. They were apparently two types, the “0” type fighter and probably the Messerschmitt 109. Fighter at the top of my dive could not shoot me. I spiraled all the way down. The ones on pull out, believed to be inline engine types, made sweeping runs. I sustained two hits by them.’

US Navy and US Marine Corps victory credits depended heavily on the honor system at unit level, which of course was open to abuse. Eyewitness accounts were also problematic, and during the Guadalcanal campaign the shortage of paper meant records had to be constructed or reconstructed partly from memory. Aircraft wrecks for verification were also non existent, as the open ocean or impenetrable rain forest simply swallowed them up.

Victory claims by SBD crews were almost evenly divided between pilots and radioman gunners. For Dauntless pilots, the number of Zero sens they actually shot down was small. There were a number of reasons for this. A Zero sen usually only presented itself as a target either during a head on pass, or if the SBD pilot was lucky enough to “bounce” one from behind.

The dive bomber did not have the speed to go chasing after an attacking Zero sen. When a pilot did get a Zero sen in his gunsight, he was usually hampered by faulty equipment. Evidence of this is provided here in VS 2’s Report of Action following clashes with IJNAF aircraft on May 7, 1942 during the Battle of the Coral Sea:

‘The present telescopic sight has proved totally unsatisfactory. It fogs up when diving from high altitude due to the sudden change of temperature and consequent condensation on the lenses. The telescopic sight is, further, totally unsatisfactory for fixed gunnery as is fired in action today. Combat occurs at such low altitudes and vision is so restricted when looking through the sight it is seldom used in attacking enemy planes.’

In the Guadalcanal campaign, SBD crews would be further handicapped by horrid living conditions and deficient training. When VMSB 132 arrived on Guadalcanal on October 30, 1942, the level of training completed by its crews was subpar, as 2Lt John McEniry remembers:

Combat fatigue, poor food, disease, and constant air operations drained the strength and ability of crews to perform their missions with accuracy and determination. The conditions for the Japanese pilots were no different, and as the battle dragged on their combat abilities suffered as well.

Officially, the highest scoring SBD crew was Lt(jg) John Leppla and his radioman gunner, ARM3c John Liska, with seven claims (four by the pilot) during the Battle of the Coral Sea. While impressive, it is another example of overclaiming. No Zero sens were actually shot down by SBDs during the battle.

Thirteen US Marine Corps SBD squadrons were credited with 44 enemy aircraft shot down, the bulk of them coming during the Guadalcanal campaign. Of these claims, 35 went to gunners, six to pilots, and three were shared.

For Zero sen pilots, shooting down an SBD proved a difficult task. Time and again, heavily damaged SBDs that they claimed as destroyed made it back to their carrier or to Henderson Field. The reasons for this were outlined in the following VB 5 Report of Action from May 8, 1942 – the second day of fighting in the Battle of the Coral Sea:

‘The leak proof tanks were very effective. As many as 14 holes were found in one tank and nine planes had one or more punctured tanks. Of these, only one caught fire or leaked. The armored seat of at least one plane is known to have stopped enemy bullets and the rear gun armor effectively stopped many bullets. It is also thought that the armored seat of one plane stopped or exploded a 20mm projectile.’

At least 63 SBDs were lost to enemy fighters, the vast majority of those – 39 (official count) – being carrier based in 1941–42. The remaining 24 were either downed in air combat during the Guadalcanal campaign or in the Battle of the Philippine Sea in June 1944. Unfortunately, although a number of IJNAF aces fought in the major carrier engagements of 1941–42 and during the fighting for Guadalcanal, Japanese records do not note their individual victories.

SBD Dauntless Vs A6M Zero-sen, Pacific Theater 1941-44 is published by Osprey Publishing and is available to order here. 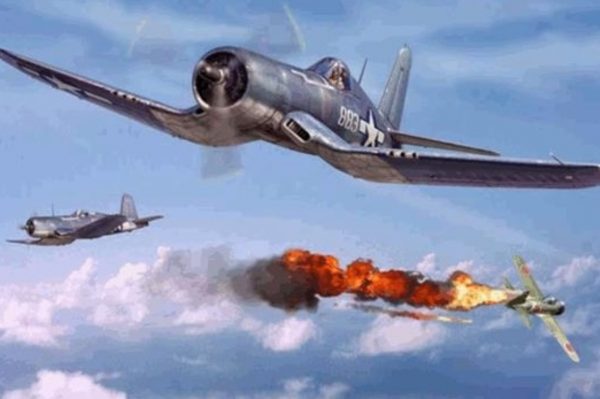 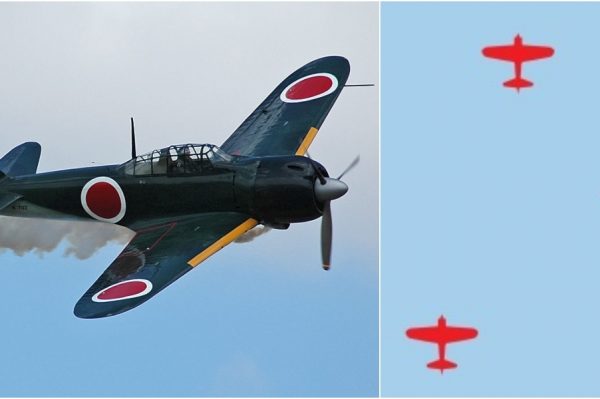