Log In Sign Up
Homepage Aviation HistoryDuring World War II Germans re-engined a Spitfire with a DB 605A. It was found to be better than the Merlin version.

Performance of the Spitfire with the DB 605 was superb – significantly better than the Merlin version.

The Supermarine Spitfire is probably the most famous of all British aircraft.

The Spitfire, designed by Supermarine Aviation Works (Vickers) Ltd initially on a private venture basis, was highly influenced by a desire to offer a higher performance than had been previously achieved by the F.7/30 design. This, combined with a further desire to advance the potential of the Rolls-Royce Merlin and Griffon engines, saw their parallel development form an integral part of the Supermarine Spitfire story.

‘Yes and they tested it at Rechlin – where it was found to be better than the Merlin version!,’ Charles McDevitt, an aviation historian, explains on Quora.

‘In November 1942, Spitfire VB EN830 NX-X of 131 Squadron made a forced landing in a turnip field in German-occupied Jersey. The plane was repaired by German forces and re-engined with a DB 605A, amongst other modifications.

‘When the Merlin engine was removed it was discovered that the fuselage cross section was virtually identical to that of the engine nacelle of a Messerschmitt Bf-110G. Consequently, a new engine support structure was built onto the Spitfire’s fuselage and the DB 605 engine and cowling panels added. A propeller unit and supercharger air intake from a Bf 109 G completed the installation.

‘Other changes made were to replace the Spitfire instruments with German types, and to change the 12-volt electrical system to the German 24-volt type. In this form the Daimler-Benz Spitfire started flying in early 1944.

‘The ease of switching between upright and inverted V12’s should come as no great surprise since the first Bf 109 flew with a Rolls Royce Kestrel engine.’

‘The ‘mule’ retained the sweet handling of the original Spitfire and was popular with German pilots more used to the wilful landing performance of the Bf-109.

‘Performance with the DB 605 was superb – significantly better than the Merlin version – but then it had had all armament removed and was a lot lighter!

‘It was flown regularly until destroyed in a USAAF bombing raid on 14 August 1944.’ 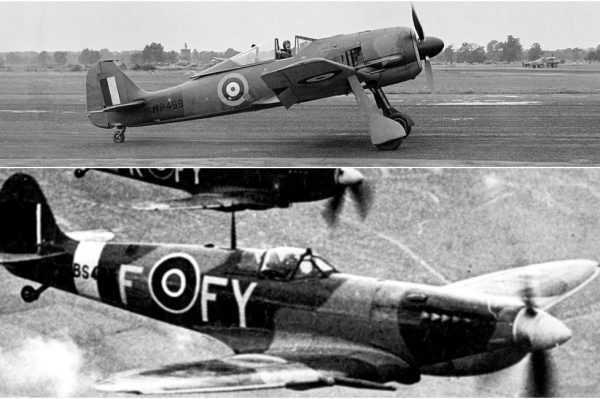 How a captured Focke-Wulf Fw 190A led to the development of the Spitfire Mk IX, the best close-in fighter of WWII