Log In Sign Up
Homepage Cold War EraDid you know that the Argentine Navy could have been the first export customer for the Harrier Jump Jet? 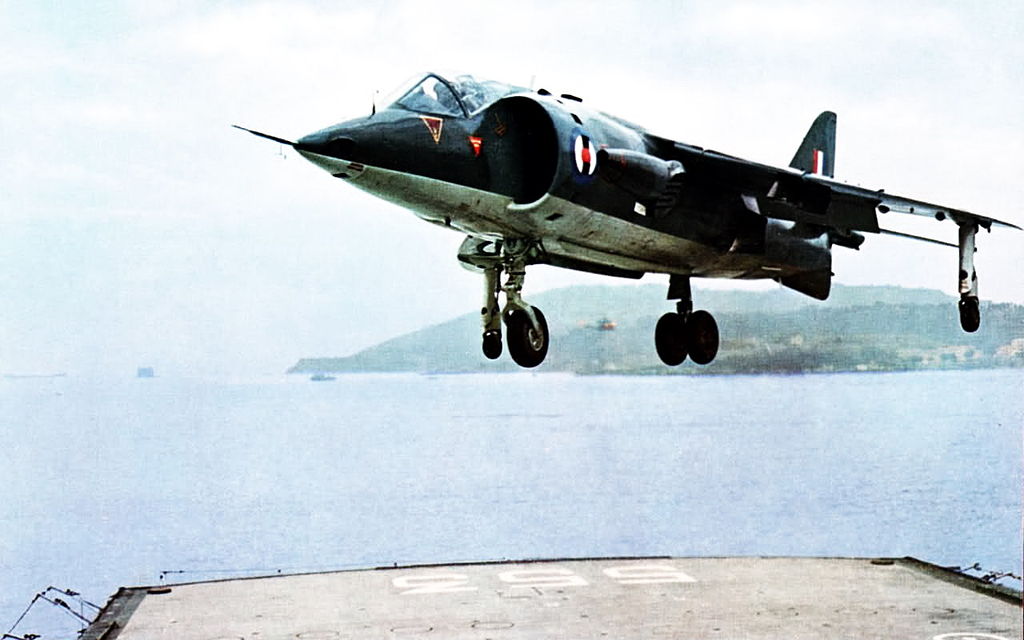 The UK was not against a Harrier sale, as the situation regarding the Malvinas/Falkland Islands was relatively satisfactory at that time.

In 1963, the Argentine Naval Aviation Command’s front-line fighters were the Vought F4U-5 Corsair and Grumman F9F-2 Panther, which were both becoming obsolete, especially the former. The force sought to buy the Douglas AD-5 Skyraider to replace the Corsairs, and wanted a batch of Douglas A-4B Skyhawks to replace the Panthers. The force asked the US government for permission to buy a batch of A-4Bs in 1966, but it replied offering 30 A-4As, which were not accepted. Another request was made for ten A-4Fs and two TA-4Fs in 1968, but this sale was not authorised either. As explained by Santiago Rivas in his book British Combat Aircraft in Latin America, this led to the decision to look for other suppliers and in 1969 the force asked the British government if it could test the Hawker Siddeley Harrier GR.Mk.1. During the delivery of the newly acquired aircraft carrier ARA 25 de Mayo (V-2) from Holland, the ship went to the UK and tests were conducted on Sep. 4, 1969 by an RAF Harrier GR.Mk.1 (XV757, which was only officially delivered to the RAF on Sep. 19, two weeks after the tests on the Argentine carrier), with the support of a Royal Navy Westland Wasp, which provided search and rescue cover and also took photographs of the trials.

The Harrier created a very good impression among the Argentine Navy officers, so the authorisation to buy six planes was requested in January 1970, with an option to acquire six more; it wanted the first two to be delivered by January 1971 with the remaining examples throughout 1972. By that time, Hawker Siddeley was entirely committed to producing the Harrier for the RAF to meet the timescale, the British Ministry of Technology asked the RAF to authorise the diversion of two aircraft from its order, at least for delivery by March 1971, which it believed could be acceptable to the Argentine Navy.

According to the Ministry of Defence, there were serious difficulties in diverting part of the order to Argentina, given that Rolls-Royce also had to accomplish the delivery of engines to the US Marine Corps and there were no prospects of a significant increase in engine production during that timescale. Hawker Siddeley and Rolls-Royce were blamed by the MoD for being unwilling to make ‘even the smallest speculative provision against the future exports of which they have maintained there were considerable prospects’.

Additionally, problems with the engines that were being experienced by November 1969 led to a reduction of available aircraft and the Ministry of Defence considered that diverting Harriers to Argentina with, at least, two spare engines, would considerably affect the rate at which the squadrons were being built up.

The Harrier entered service in April 1969 with the Harrier Conversion Unit (later 233 OCU) and 1 Squadron. The Ministry of Defence considered it would be fully operational by April 1970, the second squadron (4 Squadron) ready by June. It estimated there would be four squadrons, with a total number of 48 planes, available for NATO by the end of 1971.

As soon as the US government got to know about the negotiations for the Harrier, it proposed a batch of 24 A-4B Skyhawks. Sixteen were to be modernised in a similar way to the A-4Bs that had already been delivered to the Argentine Air Force with some differences in equipment.

In the meantime, Foreign Office Minister Lord Chalfont stated on Feb. 26, 1970 that the UK was not against a Harrier sale, as the situation regarding the Malvinas/Falkland Islands was relatively satisfactory at that time and the government did not think the US or Chile could strongly oppose it.

Finally, as the British government’s agencies could not reach an agreement about a feasible diversion of the first two aircraft, the Argentine Navy decided in May to go ahead with the US proposal for A-4Bs although it informed Hawker Siddeley that the Harrier purchase had not been cancelled and negotiations could be resumed in the future.

Less than a decade later, the UK Ministry of Defence considered the sale of an aircraft carrier with a force of Sea Harriers to the Argentine Navy, to replace the ARA 25 de Mayo and the Skyhawks. Argentina was considering the aircraft and the British analysed the possible sale of HMS Hermes once she was decommissioned in 1983 or Invincible-class vessel.

The Argentine Navy had been looking for a new combat aircraft and also shortlisted the Douglas A-4E, F and M and the Dassault Super Etendard. In the end however, the sale of 14 Super Etendards was agreed by September 1979, with the Malvinas/Falklands war in 1982 ending any chance of the Harrier or Sea Harrier equipping the Argentine Navy.

British Combat Aircraft in Latin America is published by Crecy and is available to order here.

Did you know the Argentine Air Force wanted to replace its A-4 fleet with F/A-18s or F-16s? Instead had to buy 34 former USMC Skyhawks and upgrading them to the A-4AR standard