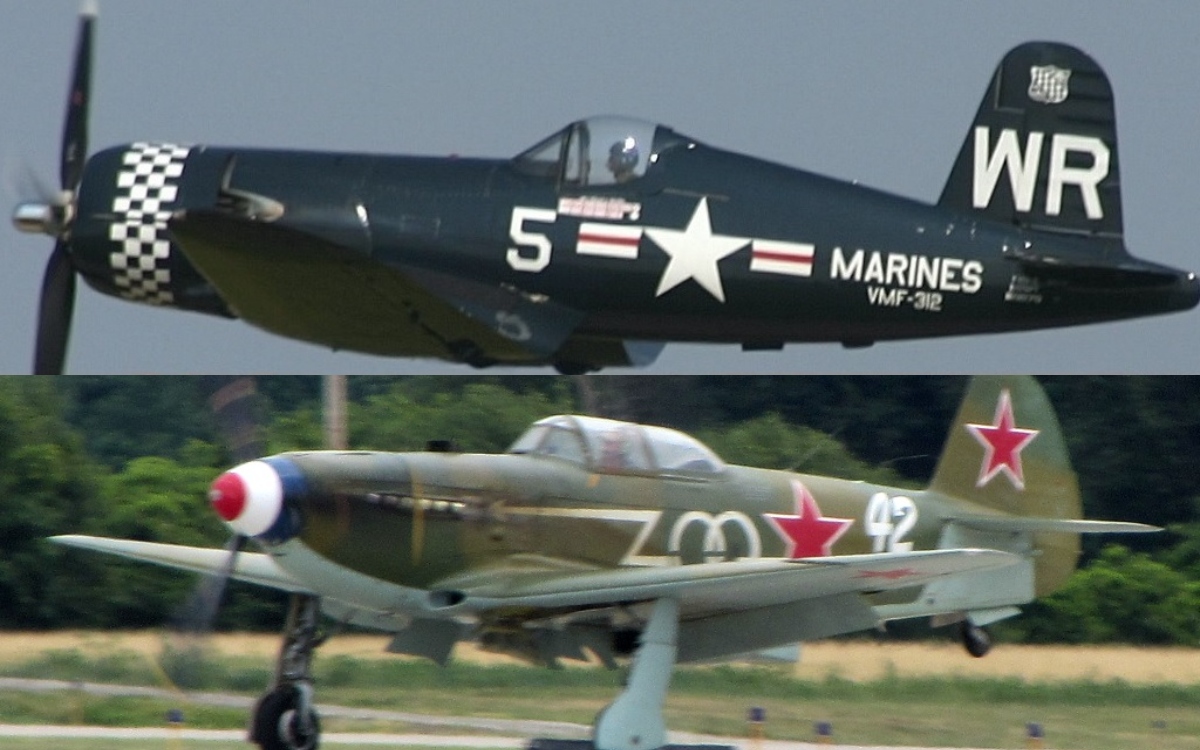 It had taken less than ten minutes to destroy three Yaks and seriously damage a fourth. In fact the wreckage of the latter aircraft was later found in shallow water nearby.

Although outclassed by the new generation of jet fighters and chiefly used in the close air support role during the Korean War, a number of US Navy and US Marine Corps (USMC) F4U Corsairs were sent up against the night raiders that North Korea sortied over UN lines after dark, and it was in an F4U-5N nightfighter that Lt Guy Bordelon became the US Navy’s sole ace of the conflict.

However, with close air support missions having the highest priority, the chances of a US Navy or USMC Corsair encountering any enemy aircraft were remote. All F4U from USMC day squadrons spent time operating from land bases in South Korea as well as serving at least one stint aboard the light carriers. Operating from the ships enabled the pilots to range further up the North Korean coast, and increased the opportunity for aerial combat, even though the North Korean People’s Air Force (NKPAF) had virtually ceased to exist after the first few months of combat. By late 1950 F4Us were roaming all the way up to the Yalu River, their pilots itching for a fight.

As explained by Warren Thompson in his book F4U Corsair Units of the Korean War, on Apr. 21, 1951, the ‘Checkerboards’ of VMF-312 (the unit had gone back to sea aboard CVL-29 in March, taking the place VMF-212) were steaming up the North Korean coast aboard Bataan. The unit’s Corsairs were loaded with everything they could carry, including external fuel tanks, 5-in HVARs and two 500-lb general purpose bombs. The pilots were at mission briefing well before first light preparing for a long-range interdiction mission against targets of opportunity. Little did they know that they would encounter four NKPAF Yak-9 fighters whose aggressive pilots were determined to shoot down Marine Corsairs.

Leading the four-ship division was Capt Phillip C DeLong, who had scored 11 kills flying F4U-1 s with VMF-212 in the Solomon Islands in early 1944. Before this day was over he would add two more to his tally;

‘I led a four-ship flight off the carrier at 0540 hrs. Our mission was armed reconnaissance along the west coast of North Korea. About an hour into the mission, as we got close to Chinnampo harbour, we heard a distress call from one of our pilots who was flying with another VMF-312 division. He radioed that he was baling out, so I immediately notified our carrier’s rescue unit to send a helicopter to pick him up. I also sent two of my Corsairs to rendezvous with the chopper while the other division’s F4Us remained near the downed pilot. In the meantime, my wingman, Lt Harold Daigh, and I continued on to our original target area.

‘We were climbing for altitude, passing through 2000 ft, when we spotted four aircraft approaching us from the northwest at 5000 ft. At this time I had my maps spread out on my lap, and Lt Daigh called them out as F-51 Mustangs. Believing them to be friendly, l didn’t pay much attention to them as they turned toward us from the “ten o’clock” position in a loose right echelon formation. They sure looked like Mustangs, but they weren’t. I became aware of this when one of their 7.7 mm rounds entered my cockpit, damaging my radio! Taking a few more hits, I realised they were Russian-built Yak-9 piston-engined fighters. While they were concentrating on me, Lt Daigh pulled in behind the last two Yaks.’

Both Corsairs were still loaded with ordnance, as they had not yet engaged any ground targets. Despite this burden, Daigh manoeuvred into position behind the No 3 Yak and opened fire. He did not notice any results, and he turned his attention to the other fighter in the element. A long and accurate burst caught it in the tail, wing root and rear fuselage. As soon as the enemy pilot realised what was happening, he took violent evasive action, but his wing broke off and the stricken fighter plummeted to the ground out of control.

‘As soon as I was fired on, I executed a quick split-S to pick up airspeed’, Capt DeLong continued. ‘I still had a cockpit full of loose maps, which did nothing for my visibility, and I had to get rid of them fast before I could recover. This was one of the more tense moments of the mission, considering I started the manoeuvre at an altitude of just 2000 ft in a fully-loaded Corsair. t I was able to stow the maps, recover from the dive and make a climbing turn to the left. Although two of the Yaks attacked me again from astern, I was able to turn the tables. While I was in a defensive turn, one of them crossed in front of me from right to left. At that instant, I saw Lt Daigh’s first victim crash.’

A second before the Yak passed in front of hint, DeLong fired a solid burst and the enemy fighter ran right through his ‘wall of fire’. It immediately went into a steep dive, streaming smoke, and hit the ground half-a-mile from where the first Yak had crashed. DeLong jettisoned his bombs but kept the rockets in place, thinking he might need them for the remaining Yaks. As he turned his attention to them, he saw that Daigh was pursuing the third fighter, and the fourth one was on the F4U pilot’s tail. DeLong radioed for his wingman to break off and pull hard to the left. As he did so, DeLong opened fire on the trailing Yak. It began smoking from the cockpit area and wing root.

‘As I came up on the lead Yak, which Daigh had been trailing, I opened fire and the rounds converged on the forward part or its fuselage. The aircraft started smoking, turned south, did a split-S and then recovered to  the west. I followed it throughout this manoeuvre, and continued scoring hits every time I fired. He was trailing thick black smoke, and pieces of the aircraft were falling away. At that point the pilot ceased his evasive tactics, and I knew I had him.’

It was then that DeLong thought it would be a good time to fire his rockets at the stricken fighter. However, when he hit the switch, nothing happened. Moments later the pilot jettisoned his canopy and papers flew out of the cockpit. He then bailed out, and his aircraft went straight in. It had taken less than ten minutes to destroy three Yaks and seriously damage a fourth. In fact the wreckage of the latter aircraft was later found in shallow water nearby, so the entire flight of four had been downed to become the Marines’ first aerial kills of the war, and the first for the F4U.

F4U Corsair Units of the Korean War is published by Osprey Publishing and is available to order here. 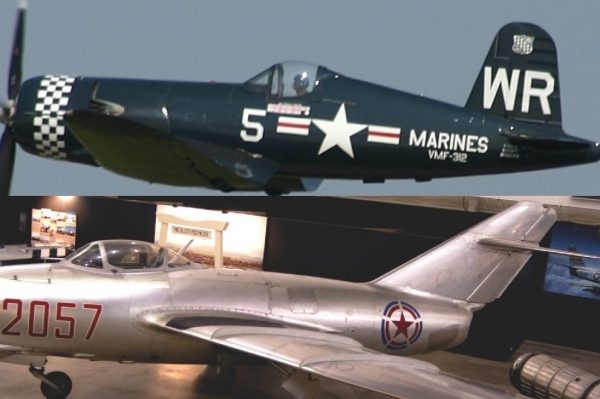 F4U Vs MiG-15: the story of how the WWII Corsair became a MiG Killer 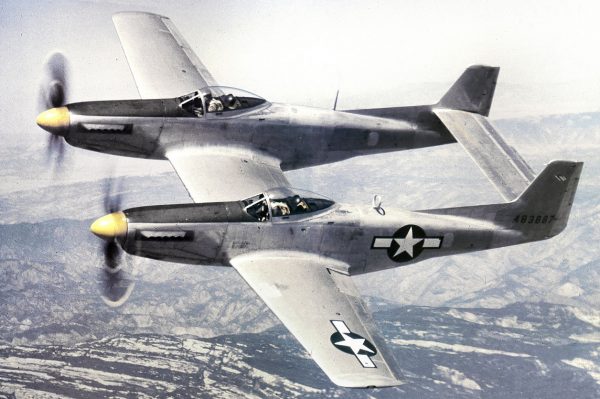