TRENDING NOW
Daredevil ‘Mad Mike’ Hughes dies while Launching Himself...
Here’s why NASA Equipped an F-15 with an...
Simultaneous B-52 Mission to Indo-Pacific Theater and Unarmed...
Impressive Video shows XB-70 Valkyrie Mach 3 Strategic...
New Missile for F-35 almost Ready for Joint...
F-15 Vs F-16 Vs F/A-18: The Aircrews’ Perspective
This E-3 Driver is the Third AWACS Pilot...
First Final Flight for Compass Call: USAF Retires...
How the Secret Development of the F-117 led...
A Quick Look at ‘HObIT’ the HGU-55/P Helmet...
Home Aviation History C-130 ABOARD: HOW THE HERCULES BECAME THE BIGGEST AIRCRAFT TO LAND ON AN AIRCRAFT CARRIER
Aviation HistoryMilitary AviationU.S. Navy

C-130 ABOARD: HOW THE HERCULES BECAME THE BIGGEST AIRCRAFT TO LAND ON AN AIRCRAFT CARRIER

Although the testing set an unbreakable record for the largest and heaviest plane to land on a ship, the C-130 was considered too risky for routine COD operations

The reason behind this test was that the U.S. Navy was trying to determine whether the big Hercules could serve as a “Super-COD”, or “Carrier Onboard Delivery” aircraft. The problem was that there was no aircraft which could replenish a carrier in mid-ocean. The Hercules was stable and reliable, and had a long cruising range and high payload.

“They could not find a C-130 crew interested in going to the boat. So, the Naval Air Test Center fingered two fighter pilots, who couldn’t even spell ‘propeller,’ ” said Flatley in Robert R. “Boom” Powell, Commander, USN (Ret.) book Wave-Off! A History of LSOs and Ship-Board Landings. “They gave us the keys to a Marine KC-130. […] We had one four-hour familiarization flight with Lockheed’s chief test pilot before making exactly 100 test landings on the runway at Patuxent River.”

The Marine markings were painted over with Navy and the legend “LOOK MA, NO HOOK” was put on the side of the fuselage.

Flatley continues: “Interestingly, relative to rotations, we were directed not to rotate for takeoff until the wings were forward of the Forrestal’s island due to concern for the 15 feet of wing tip-to-tip island clearance. In fact, we could have been waving to the captain as we went by the bridge at eye level had we not been saddled with said restriction. Forrestal kept 40 knots over the bow for the duration of the trials, so rotation at 54 knots indicated into 40 knots of lift (sic) was very conservative given the C-130’s performance.” 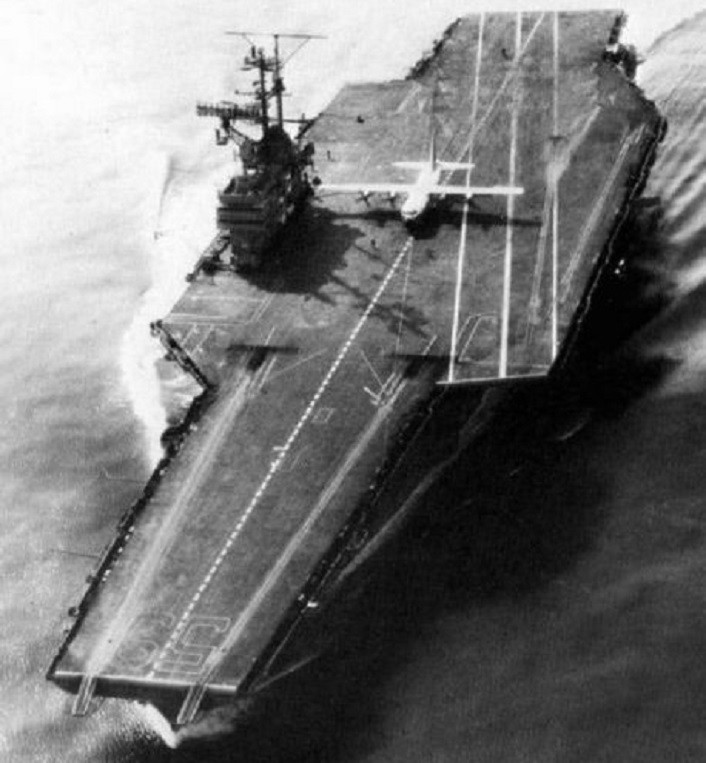 The test was conducted 500 nautical miles out in the North Atlantic off the coast of Massachusetts. The C-130 COD evaluation was more than successful. At 80,000 pounds, the KC-130F came to a complete stop within 295 feet, and at the maximum load, the plane used only 745 feet for take-off. Flatley and his crew (Aviation Machinist’s Mate (Jet) 1st Class and (at times) Lockheed-Marietta test pilot Ted H. Limmer Jr. also joined the crew) made a total of 29 touch-and-go landings and 21 full-stop landings and takeoffs on 30 October and on 8, 21, and 22 November.

The U.S. Navy concluded that, with the C-130 Hercules, it would be possible to lift 25,000 pounds of cargo 2,500 miles (4,000 km) and land on a carrier. However, although the testing set an unbreakable record for the largest and heaviest plane to land on a ship, the idea was considered too risky for routine COD operations. The aircraft was also too large to fit on the carrier’s elevators or in her hangars, severely hampering operations. The C-2 Greyhound program was developed and the first of these planes became operational in 1965.

For his effort, the Navy awarded Flatley the Distinguished Flying Cross. The Hercules BuNo 149798 instead, after having seen action in Vietnam, Iraq during Operation Desert Storm, Afghanistan and Iraq again in Operation Iraqi Freedom, was retired to the National Naval Aviation Museum at Naval Air Station Pensacola, Florida, in May 2003.

The following video is the original footage of the KC-130 tests conducted aboard the USS Forrestal.

Simultaneous B-52 Mission to Indo-Pacific Theater and Unarmed...

This E-3 Driver is the Third AWACS Pilot...