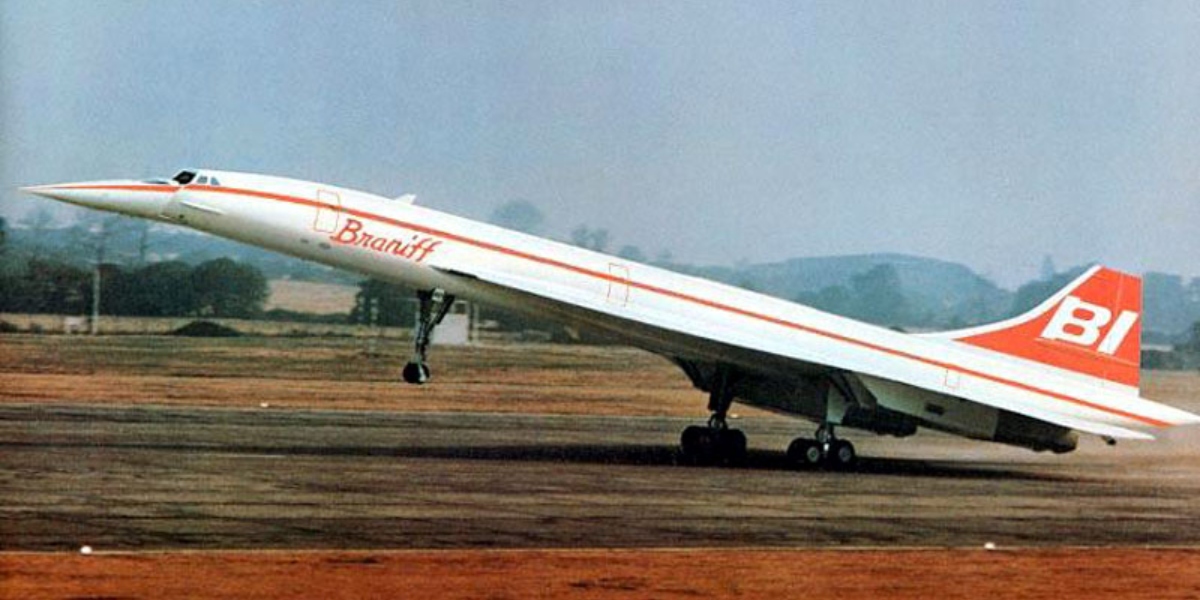 Due to the American noise regulations, Braniff Airways Concorde supersonic airliners were limited to Mach 0.95 yet they flew at slightly above Mach 1.

The Aérospatiale/British Aircraft Corporation (BAC) Concorde was a British-French supersonic passenger jet airliner. It had a maximum speed of Mach 2.04 (1,354 mph or 2,180 km/h at cruise altitude, over twice the speed of sound), with seating for 92 to 128 passengers. The aircraft entered service in 1976 and continued flying for the next 27 years.

The Concorde, which was jointly developed and manufactured by Aérospatiale and the BAC under an Anglo-French treaty, was built in twenty samples including six prototypes and development aircraft.

Air France (AF) and British Airways (BA) were the only airlines to purchase and fly the Concorde although also Singapore Airlines and Braniff Airways operated the airliner.

On Jan. 12, 1979 as part of its ambitious expansion program, Braniff introduced a service between Texas, Washington D.C. and Europe on interchange flights with British Airways and Air France. Flights between Dallas and Washington’s Dulles airport were operated by Braniff cockpit and cabin crews from which British or French crews would take over for the remaining segment. Due to the American noise regulations, Concorde was limited to Mach 0.95 yet flew at slightly above Mach 1.

According to ConcordeSST.com, Concorde was never painted in a Braniff livery, although there were several artist impressions (like those featured in this post) of what one would look like, if the service had continued it would have been more than likely that one side of the aircraft would have been given a Braniff livery, in a similar fashion to what happened for the Singapore Airlines services.

The only change was in the registrations and ownership of the aircraft. When in the US the “G” or “F” was covered up with white tape when the aircraft was sold to Braniff, so a Concorde registered as G-N81AC would become N81AC when flown in US. Because the FAA would not allow the non-US aircraft a US certificate of airworthiness, the aircraft ownership was transferred to Braniff Airways for the Washington-Dallas segment of the route. As well as changing flight crews the US approved documentation and procedures had to be present on the flight deck, with the UK/French documentation being stored in the forward toilet!

British Airways, at the behest of their insurers were forced to fly a captain and flight engineer as cockpit observers for US segments as in reality the aircraft were still BA owned for insurance purposes. One interesting part of this was that the US pilots were allowed to fly Concorde up to 60, but British pilots were forced to retire at 55, so occasionally a US pilot would fly the aircraft, but if he was in the UK this would not have been allowed.

14 Braniff pilots (3 captains, 5 First officers, 4 flight engineers, a check pilot and a check engineer) were trained in both France and the UK to operate Concorde, not just at the subsonic speeds that their services would operate at but also up to its Mach 2 cruising speed.

On the first day of services, two Concordes (Air France, F-BTSD and British Airways, G-BOAE) flew in from the east and lined up to land on parallel runways at Dallas Fort Worth International Airport (DFW). The simultaneous touchdown marked the beginning of regularly scheduled supersonic service between DFW and Europe by Braniff in cooperation with Air France and British Airways. The new interchange was the first of its kind involving a United States carrier and foreign airlines.

Braniff terminated Concorde services at the end of May 1980 due to the high cost of operating the service with load factors at only 20%, coupled with Braniff’s general financial woes at the time.

Travellers were still flying in great numbers on traditional, slower, aircraft on the same route for the same 1st class prices to fly on Concorde. Concorde just never caught on.