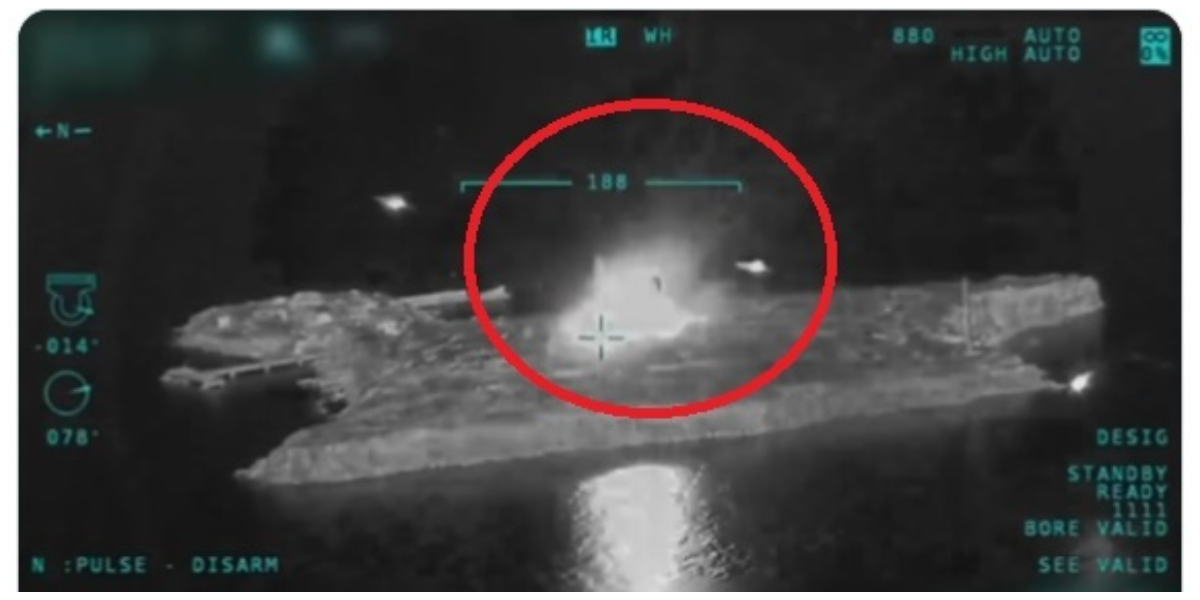 Somebody has released the Bayraktar TB2-taken video featured in this post of two Ukrainian Su-27 fighter jets bombing the Russian garrison of the Zmiyniy Island (the famous Snake Island in the Black Sea).

Somebody has released the Bayraktar TB2-taken video featured in this article (originally posted by Oryx on Twitter) showing two Ukrainian Su-27 fighter jets bombing the Russian garrison of the Zmiyniy Island (the famous Snake Island in the Black Sea).

What you can see are two Ukrainian Su-27s streaking in at low altitude, perhaps 150m, to release ‘dumb’ bombs. Probably, each released two. The video is not clear enough to say the type, but I doubt they are anything else than FAB-250M-62 or FAB-500M-62, ‘slicks’.

– at least one of bombs released by the formation leader failed to detonate;

– which was just as good because the detonation of the one bomb that did go off nearly blew up his wingman, in turn

– causing the wingman to miss by a wide margin.

I know, it’s going to sound ‘unfair’ and many aren’t going to like the following, but, ‘praise, where praise is due, and critique, where critique is due’.

By all respect for Ukrainian pilots who, no doubt, are longing for action and are ready to pay the price for defending their country…. but, this is ‘brilliant’ demonstration that they are simply not trained well-enough, or at least do not have sufficient experience to fly this kind of missions. Nobody with sufficient training and experience would fly this mission that way: if, then there would no ‘welded wing’ formation, but a separation of at least 15-30 seconds between the two aircraft.

Of course, one could say, ‘well, Su-27-pilots are spending 90% of their time training air-to-air’ – and, no doubt, that’s truth. But the problem is that before the war they flew too little to at least try training these 10% of air-to-ground properly. Moreover, considering this war is not going to be over tomorrow in the morning, at least their commanders should not send pilots lacking training and experience into combat operations of this kind.

Once again: pilot bravado, all nice and fine. As long as nobody gets hurt – I’ve got no problem with it. But this is just a waste of pilots and aircraft that simply can’t do the job.