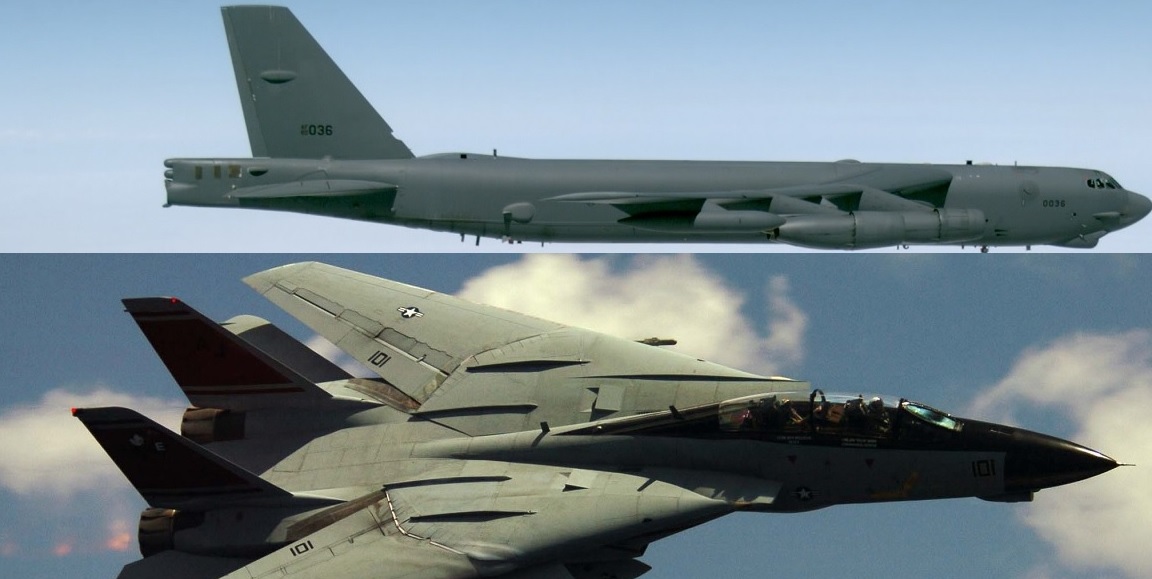 B-52 Vs F-14: former BUFF driver tells the story of an unusual bomber V fighter dogfight

“The F-14, however, flown by “nasal radiators,” kicked our ass. Most incredibly, the Tomcat got immediately on our ‘six’ despite coming at us head on and having to turn 180 degrees for his initial approach, while the Air Force interceptors had arrived from behind to begin with, a great advantage,” Jay Lacklen, former B-52 pilot

One of the few times we got to maneuver forcefully at high altitude was during intercepts by Air Defense Command interceptor fighters, which included the F-102 and F-106 from the USAF, and the F-14 from the U.S. Navy.

Later, in the C-5, I had intercepts run on me, without maneuvering, by NATO fighters that were usually F-16s or British Tornadoes as we flew across Europe. I enjoyed the American intercepts in the B-52 because we got to “dance” with the fighter boys. As the interceptor checked in on frequency, I would tell him we were ready and “had our dancing shoes on.”

As the intercept began, the EW would call the range and clock position of the fighter, such as “eight o’clock, ten miles,” so I would know where he was and when to maneuver. The F-102s and F-106s proved the easiest to shake. They would come smoking in on us at high speed, but below Mach 1, and line up directly behind us at our six o’clock position, which is the missile launch or cannon firing position. I would push our speed up to three hundred knots or so to keep him at high speed as he approached. When the EW called his position about three miles at a high rate of closure, I would roll into forty-five degrees of bank, pull the throttles to idle, and raise the speed brakes. Then I would pull hard, putting the bomber into a tight decelerating turn. This would invariably cause the F-102 or F-106 to badly overshoot, since with swept wings, designed for high speed, they had greatly degraded turning capability. The long B-52 wings and airbrake deployment allowed a far tighter turn than the F-100 series fighters could manage, and we invariably “lost” them with this maneuver.

The Navy F-14, however, flown by “nasal radiators,” kicked our ass. The Tomcat could sweep its wings forward to nearly seventy degrees from its swept-wing, high-speed configuration and match my best turn, which infuriated me. Most incredibly, the Tomcat, of the movie Top Gun and “Maverick” fame, got immediately on our “six” despite coming at us head on and having to turn 180 degrees for his initial approach, while the Air Force interceptors had arrived from behind to begin with, a great advantage. As the F-14 swung behind us and approached, my EW, Buddy, called his position as “six o’clock, three miles.” Going into my maneuver, I racked the B-52 into a steep turn, groaning at the g-forces I put on the plane.

The EW, however, made the maddening call, “Target six o’clock, one mile,” repeatedly from the time I broke into the turn until I rolled out, defeated. The Tomcat stayed in perfect formation with me one mile behind in perfect shooting position. At this point, had I been in a B-1 perhaps, I could have gone to afterburner and left the F-14 far behind. The standard complaint for the F-14 was poor acceleration from low speed, as the wings were swept back for high speed from the extended position. The ratio of relatively low power to relatively high aircraft weight made acceleration an all-day thing in a dogfight. The added weight was necessary to provide beefed-up landing gear structures for punishing carrier landings, but it hampered acceleration from low speed.

But for purposes of this combat exercise, the F-14 would have shot us down easily, had our gunner not shot him down first. If he used a missile from ten miles or so behind us, he’d have nailed us; if he had to come into cannon range, however, our fifty-caliber rear cannon might have nailed him first. This is another reason why we knew we would fly our nuke mission low level, so the fighters would have a difficult time even finding us against the ground clutter. 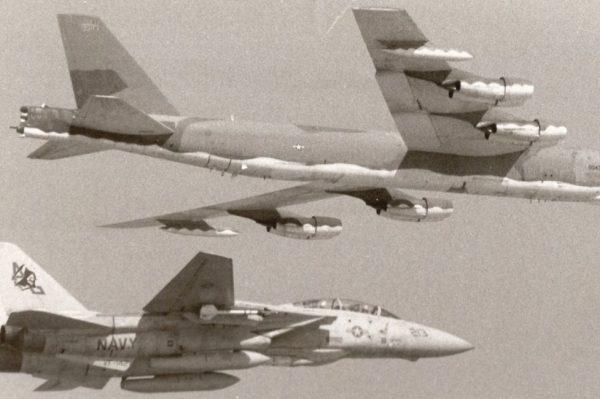