Log In Sign Up
Homepage Losses and Aviation SafetyAn in-depth analysis of infamous Dover C-5 crash – Part 1: The lead up to the accident and crash animation with cockpit recorder playing 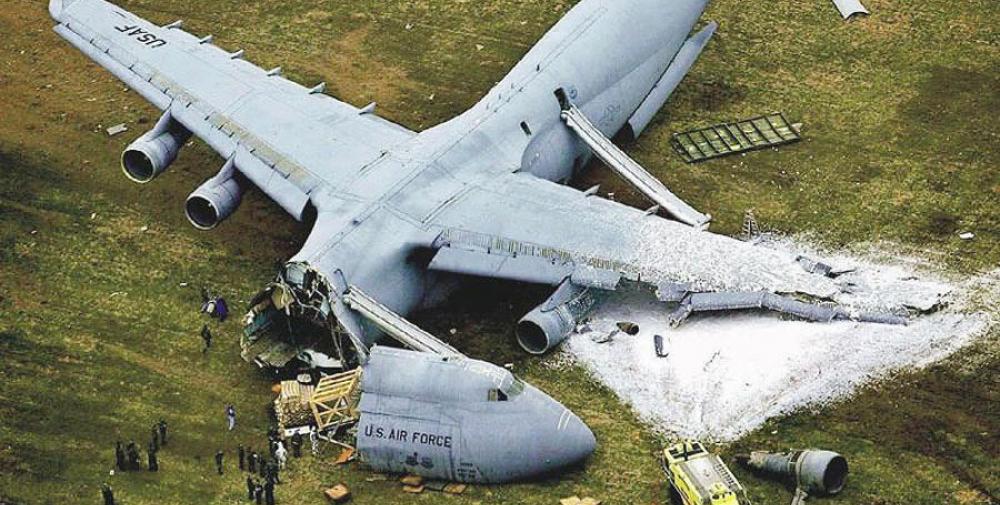 An in-depth analysis of infamous Dover C-5 crash – Part 1: The lead up to the accident and crash animation with cockpit recorder playing

That angle of attack gauge suddenly leaps from 17 degrees to 20. A stall occurs at 18 degrees. Then the mechanical female voice alerts the crew: “Stall, stall.”

Taking off in clear, unlimited visibility conditions just after sunrise, the aircraft turned toward the Sea Isle TACAN navigation station on the coast of New Jersey. As they approached that navaid about twenty miles from Dover, the “Thrust Reverser Not Locked” warning light illuminated on their instrument panel. This meant one of the mechanical locks on the reverse indicated unlocked. By the aircraft manual, the engine should be shut down expeditiously but in a normal fashion, not an emergency fashion. The crew shut down the engine and requested a return to Dover from air traffic control.

As they turned back toward Dover, many considerations had to be reviewed. First, the aircraft was very heavy with a full load of cargo and fuel. This meant a partial flap landing should be made to ensure enough power was available to use for both the landing or if a go-around was necessary. This is especially true with only three engines. Power would be limited, so the partial flap setting, which involves less aerodynamic drag, which would require less power, would be demanded.

Second, at this heavy weight, no more than a six-feet-per-second descent rate should be used so the stress of the heavy weight on the landing gear would be reduced on touchdown. This, along with the inertia of a heavy aircraft at high speed, would require more runway length to stop the plane.

So, the approved solution would be a partial flap (40%) configuration landing on a long runway to ensure sufficient stopping distance. While this would be the standard, other considerations came to the fore with this crew.

First, a previous emergency landing at Dover a year before seemed prominent in the crew’s deliberations. In that previous episode, a heavyweight C-5 had landed long, not been expeditious in slowing the aircraft initially, and had to apply maximum braking to avoid going off the end of the shorter Dover Runway (Rwy 01/19). This led to a massive brake fire and crew evacuation. As generals sometimes try to fight the previous war, this crew seemed worried about this previous accident. Most significantly, this crew had been briefed on this incident the day before this flight. This explains their overriding concern about hot brakes on landing, a concern that distracted them from much more imperative considerations they mishandled.

Factor #1: The aircraft commander flying the plane in the right seat broke off from an instrument approach to runway 19 in favor of a visual approach to runway 32, the longer runway available to provide additional braking distance. While it provided more runway, it took away a precision ILS glide slope guidance. Had they flown the precision approach, they may have recognized the problem over a thousand feet above the ground while trying, unsuccessfully to maintain the glide path.

Factor #2 (In my view, the crucial, fatal error in the sequence) The aircraft commander became indignant at being delayed because of a ground problem with the fire trucks. He protested to the crew that they should have landing priority regardless of the fire truck problems. As related earlier, the pilot flying, Golden Boy, had explained this proclivity of his to me in his initial hiring interview six years before. He said he would get enraged at being cut out of the pattern by commercial jets while instructing students in his small prop plane. So, he would cancel instrument clearance and go visually instead, in retaliation. And, that is just what he did here, with catastrophic results. He told approach control he would cancel instruments and land visually on runway 32. He then turned directly toward the runway. He’d show them!

This threw the cockpit crew, the pilots and flight engineers, into confusion. Instead of running and briefing several emergency checklists, such as landing with an engine shut down, landing heavyweight, and estimating landing brake temperatures, they suddenly found themselves on final approach.

The copilot says, rhetorically and falsely, to the engineer, that they had run all the check lists they had not run. The rest of the cockpit crew did not dispute this error or complain this was happening too fast. Someone needed insist on more time to get their act together, but no one did. The plane was not on fire and there was no urgency to land except in the copilot’s mind. They could have orbited field for hours to prepare, if necessary.

The engineers were so flummoxed one did not realize they had the wrong flap setting, and did not catch the copilot briefing the wrong, full-flap, approach speed. The other engineer did not even know the plane was on final approach. They had several questions about the approach but had no time to bring them up or discuss them with the pilots, specifically on flap setting and approach speed. In this confusion, induced by the rushed approach, they did not catch that the copilot had brought up the throttle for the dead engine, and left the throttle for the good inboard engine at idle power (Factor #3, the second most crucial error caused by Factor #2.) This made them a two-engine heavyweight aircraft without enough power to save themselves.

The aircraft commander briefly directed the engineer to compute brake temperature limits, something apparently prominent in the copilot’s considerations. The left seat, evaluator, pilot warns immediately after the brake temperature discussion, forcefully, “Just put it on the ground, we don’t need a smooth touchdown.” (Factor #4) This demonstrates the hot brake landing of the previous emergency has crowded out the necessity of ensuring a gentle arrival onto the runway due to the heavy weight. This 12,000-foot-long runway had more than enough stopping distance, and this should not have been a primary consideration. Yet, it seemed to be the main worry of the pilots, instead of the power problems of a three-engine airplane and ensuring the proper flap setting.

A few seconds later, as the landing checklist is run, the engineer calls for “Flaps Landing.” The left seat pilot moves the flaps to 100% and says, “Flaps landing,” because that is the usual, rote, response to the checklist item. This error, too, is on the aircraft commander since he had briefed the full flap landing speed of 146 kts instead of the 162 kts for flaps 40%. As the left seat pilot confirms “Flaps landing” (100%) the copilot realizes the error of the wrong flap setting for the heavyweight landing. He calls for flaps to be returned to 40%. However, he does not have enough speed to raise the flaps to 40% without stalling the aircraft. He immediately corrects his command and says not to retract the flaps.

He is also low to the ground, I presume to make sure he gets the plane on the runway expeditiously for his unwarranted fear of hot brakes on landing. So, he is now low and slow and does not have the power to recover on two engines.

Silence now ensues as the plane slows and nears both a stall and the ground. The Ground Proximity Warning System (GPWS) starts its emergency call out: “Too low, terrain!” and “Don’t sink”. The last words are from the left seat instructor pilot: “Bring it out of stick shaker (that warns of a stall). That, unfortunately, can only be done by lowering the nose, which the pilot flying cannot do without crashing.

That angle of attack gauge suddenly leaps from 17 degrees to 20. A stall occurs at 18 degrees. Then the mechanical female voice alerts the crew: “Stall, stall.”

The tail strikes the ground, ripping the entire tail structure from the plane. The rest of the fuselage, from its very high angle of attack relative to the terrain, slams down on the muddy field with the cockpit hitting the ground with 35 g’s. The right wing drags on the ground turning the fuselage right until the momentum shifts and the plane leans over on to the left wing. Outboard engines are torn from the wings. As the plane slows, a fracture in the middle of the crew compartment breaks open as the fuselage continues turning right while the forward cockpit continues tracking toward the runway. This opens a gaping hole between the two sections with only a thin left side hinge holding the sections together. 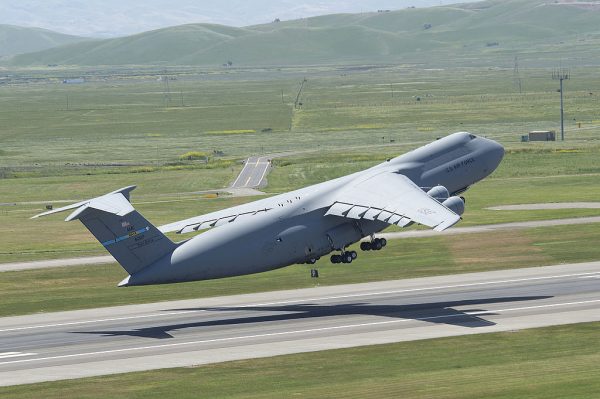 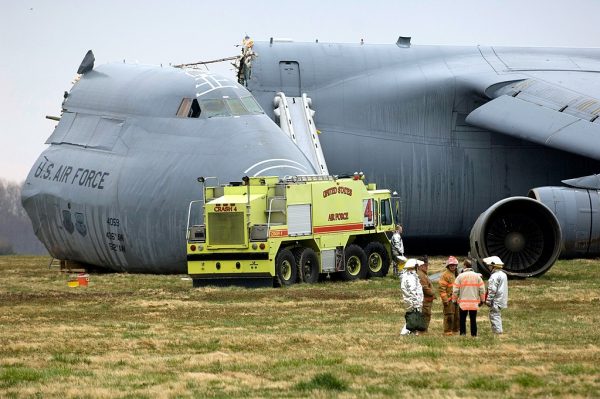