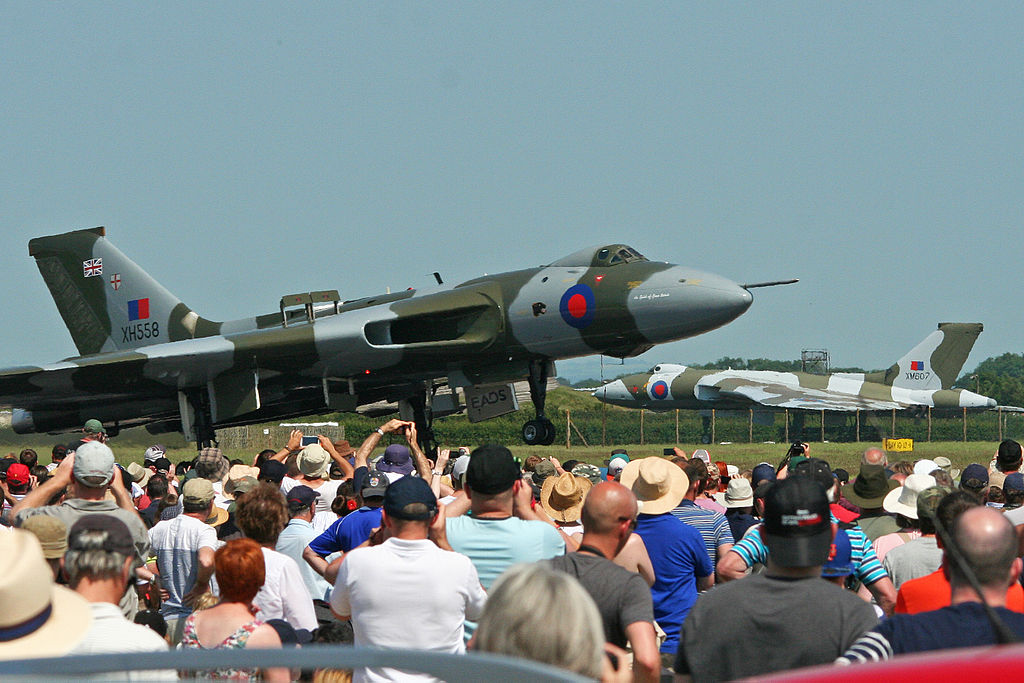 A representative description of an air display routine by Vulcan XH558

Those who have seen Vulcan XH558 display can’t fail to have been impressed. Few aircraft have had such an impact on air shows in recent years.

Vulcan XH558 was the last remaining airworthy example of the 134 Avro Vulcan jet powered delta winged strategic nuclear bomber aircraft operated by the RAF during the Cold War. It was the last Vulcan in military service, and the last to fly at all after 1986. It last flew on Oct. 28, 2015.

Few aircraft have had such an impact on air shows in recent years. Vulcan to the Sky’s XH558 has certainly been a major attraction since its return to flight in October 2007, and then its subsequent appearances at many events. Its debut display under civilian operation as G-VLCN came at the 2008 RAF Waddington International Air Show. The Vulcan arrived at the Lincolnshire air base during the early evening of Thursday 3 July, then carried out its Display Authorisation in beautiful blue summer skies. After a series of display routines, it successfully gained permission to display at the air show that weekend. Massive crowds were drawn to the event and such were the numbers that the organisers had to close the gates relatively early on the Saturday morning, as even this large base quickly reached capacity as a result of the Vulcan’s appeal – its first public air show appearance for 15 years.

XH558’s size and shape make it unmistakable – and its sound as the four Rolls-Royce Olympus engines are set to full throttle certainly leaves no doubt that it has arrived!

Full power is selected for take-off and XH558 quickly accelerates to its rotation speed of 150 knots. Once off the ground the Vulcan’s power allows it to be quickly put into a steep climb. The aircraft’s pitch is progressively increased, from an initial 35 degrees to around 45 degrees. The angle of pitch is carefully controlled by the pilot to keep the speed at around 160 knots.

Soon after getting airborne the brakes are briefly applied to stop the wheels from rotating, then the undercarriage is retracted. The 160 knot speed is maintained until the Vulcan’s pilot levels the aircraft out at 1500ft, having demonstrated the type’s performance. Power is reduced to 75%, then the V-bomber is put into a descent as it heads to a position ready to enter its display and accelerates up to 250 knots.

The first flypast is carried out at an entry speed of 250 knots at a minimum height of 300ft, and is referred to as the ‘bombing run’ due to its nature. As the jet flies along the runway, power is increased and XH558 accelerates up to 300 knots by the time it reaches the end of the display line whereupon it will have also climbed to 500ft.

Power is then cut to almost to idle and the airbrakes are extended as the Vulcan breaks away from the crowd and climbs to 800ft. Its speed will by then have eased back to 160 knots, power will be re-applied, the airbrakes will be retracted at the 270 degree point and it will drop back down to 500ft as it comes around to return head-on at crowd centre.

Once in the correct position the pilot will begin a steep turn back on to the display line and the throttles will be pushed forward to full power. He then puts the Vulcan into a steep climb to 1200ft. At that point he will commence a turn away from the display line and begin a descent with the airbrakes deployed. Power is eased back to 70% and the speed kept at 160 knots, partially using the airbrakes to control it when necessary.

The Vulcan again levels out at 500ft, turning to crowd centre once more. It is then turned back on to the display line for a pass with the bomb-doors open by the time the jet reaches crowd centre with its underside facing the audience. Speed must not drop below 150 knots during the full 360 degree turn with 45 degrees of bank which is then carried out, and by the time the Vulcan returns to crowd centre the bomb bay doors will have been closed.

This turn is continued until the jet is facing away from the crowd line and then the aircraft carries out a wing-over back towards to the display line, climbing to 700ft during the initial part of the turn. It then descends to 500ft, with the pilot controlling its speed with the application of airbrakes.

XH558 then returns along the display line until it reaches crowd centre, where it banks away and makes another turn again with a minimum speed of 150 knots. As it returns to point at crowd centre, power is applied and the V-bomber gains altitude with a steep 60-degree angle of bank in a spiral climb generally through 540 degrees reaching a height of 2500ft – so concluding an impressive display of the mighty Vulcan’s incredible flight capabilities.

The Vulcan will then either depart, or if it is to land back at the same venue, the undercarriage will be lowered once the speed has been reduced below 200 knots. It returns in a glide-approach for landing, the downwind leg being flown with power set just below 70%.

The approach speed is 160 knots until the Vulcan descends to 600ft with airbrakes deployed to their ‘medium’ setting. The throttles are then eased back slightly and the final approach will be made at 140 knots, with the airbrakes then being fully deployed.

After touchdown on a lengthy runway the nose wheels can be held in the air until the Vulcan slows down to about 70 knots. As well as looking impressive and offering the spectators some great photo opportunities, this slows the aircraft down with little use of the brakes, saving a lot of wear and tear. XH558’s aircrew do not routinely use the brake ’chute, which is reserved in case of an emergency only.

Those who have seen XH558 display can’t fail to have been impressed. For such a big aircraft the main aspect of its capability which stands out is its impressive and almost fighter-like manoeuvrability. The noise from the four Rolls-Royce Olympus engines also leaves no doubt as to its immense power. 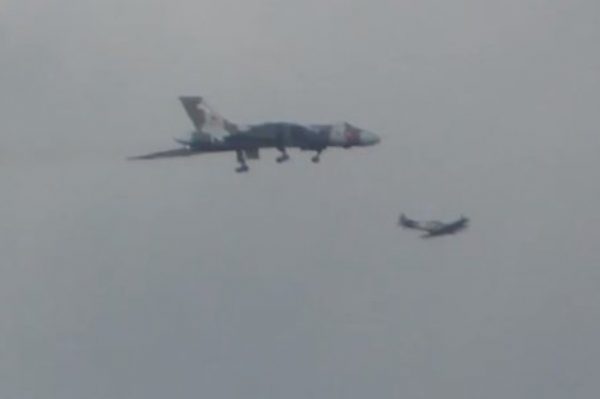 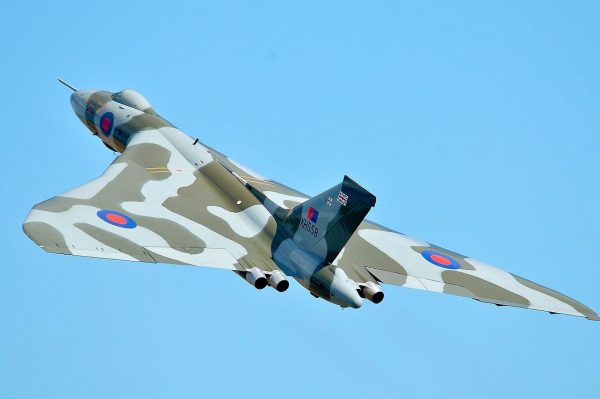