In 2001 Ukraine officially announced that it had supplied a single Su-27 to the UK. Eleven years later the UK acquired another Flanker – this time from Belorussia. A few Su-27s have been acquired by the USA too.

In 2001 Ukraine officially announced that it had supplied a single Su-27 to the UK. There are reasons to believe that the fighter in question was Su-27 ’44 Red’ (c/n 36911027717), a Belorussian Air Force aircraft which had somehow ended up in the Ukraine according to customs papers. As told by Yefim Gordon and Dmitriy Komissarov in their book Sukhoi Su-27 & 30/33/34/35, the aircraft was sold on Nov. 22, 2001 and delivered in disassembled condition. Although no further details were disclosed, we may assume that the customer was one of the two successors of the UK Defence Evaluation & Research Agency (DERA) – the private company QinetiQ or the government-owned Defence Science and Technology Laboratory (Dstl).

In much the same vein, a few Su-27s have been acquired by the USA. Since the late 1940s, when the USA and the Soviet Union turned from allies in Second World War to adversaries in the developing Cold War (and were on the brink of starting a ‘hot` war more than once), the Americans had been trying, with varying success, to obtain samples of Soviet military hardware. This included combat and dual-purpose (civil/military) aircraft which came under the auspices of the US Air Force – to be precise, the Foreign Technology Division of the Air Force Systems Command (AFSC). The purpose was to assess the state of the potential adversary’s aviation technology and, of course, to find the aircraft’s vulnerable spots in order to develop tactics which USAF pilots would use against them in a future war. Among other things, such aircraft were to be used for realistic threat simulation, acting as the ‘bad guys’ during military exercises such as Red Flag. There was also the potential of using them in false flag operations if necessary.

The ways in which the USAF obtained Soviet and Russian aircraft vary. Some aircraft were war booty, being directly captured by American troops in various conflicts. Others were loaned from American allies (who either owned these aircraft or had similarly captured them in a war). Still others were purchased from nations selling off their military assets, seeking a quick profit. The latter kind includes privately owned vintage military aircraft (warbirds) which were/are on the US civil register; they are included here because some of them were reportedly used for threat simulation by arrangement with the US military. However, some of the civil-registered Soviet military aircraft in the USA are not warbirds; they are registered to various limited liability companies (which are often ad hoc companies, their names coinciding with the aircraft’s registration!), and these LLCs are front organisations for the Central Intelligence Agency which uses the aircraft for clandestine operations outside the USA.

According to the western press, a Belorussian Air Force (of all things!) Su-27 Flanker-B fighter was delivered to the USA in the mid-1990s and obviously operated by the US military for evaluation purposes. The aircraft in question was later identified as ’45 Red’ (c/n 36911027918) which had been sold in November 1995.

What is certain is that two Su-27UB combat trainers were purchased from the Ukrainian Air Force in 2009, becoming the first-ever privately owned Flankers. The aircraft were previously in service with the 831st GvIAP in Mirgorod as ’61 Blue’ (c/n 96310408027, f/n 05-02) and ’66 Blue’ (c/n 96310418210, f/n 11-05). In accordance with US and Ukrainian legislation the Flanker-Cs were demilitarised before they were exported, being airlifted to the USA by an An-124-100 transport of the Ukrainian carrier Antonov Airlines. However, the weapon control system (WCS) was not completely removed — the OEPS-27 IRST/LR ‘ball’ was missing but the head-up display in the front cockpit remained in place. As is usually the case with warbirds of eastern origin, western communication and navigation equipment was fitted.

The aircraft were placed on the US civil register, ’66 Blue’ becoming N131SU on Dec. 2, 2009, while ’61 Blue’ was registered N132SU on Nov. 24, 2009. They retained their light blue/dark blue/light grey UAF splinter camouflage but received new ‘tactical codes’ to match the registrations – ’31 Blue’ and ’32 Blue’. Though civil-registered, the Su-27UBs were operated by Tactical Air Support, Inc. (aka TacAir) – a private ‘aggressor’ company based in Reno, Nevada (although the FAA database shows them as registered to Meridian, Inc. of Wilmington, Delaware). Both aircraft sported the TacAir logo on the tails in lieu of the UAF’s shield-and-trident insignia. Later the two Su-27UBs were sold to Pride Aviation, Inc. of Illinois, which operated them from Chicago’s Rockford International airport; the new owner expressly stated that the jets had no military applications. A while later they were sold again; the aircraft are no longer active, their certificates of airworthiness having expired on Jun. 30, 2013 (N131SU) and 31st March 2013 (N132SU). 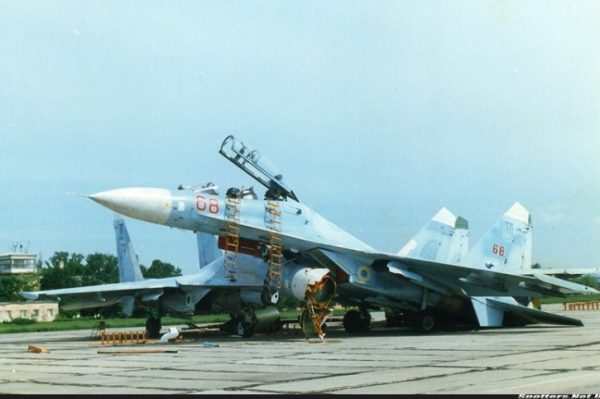