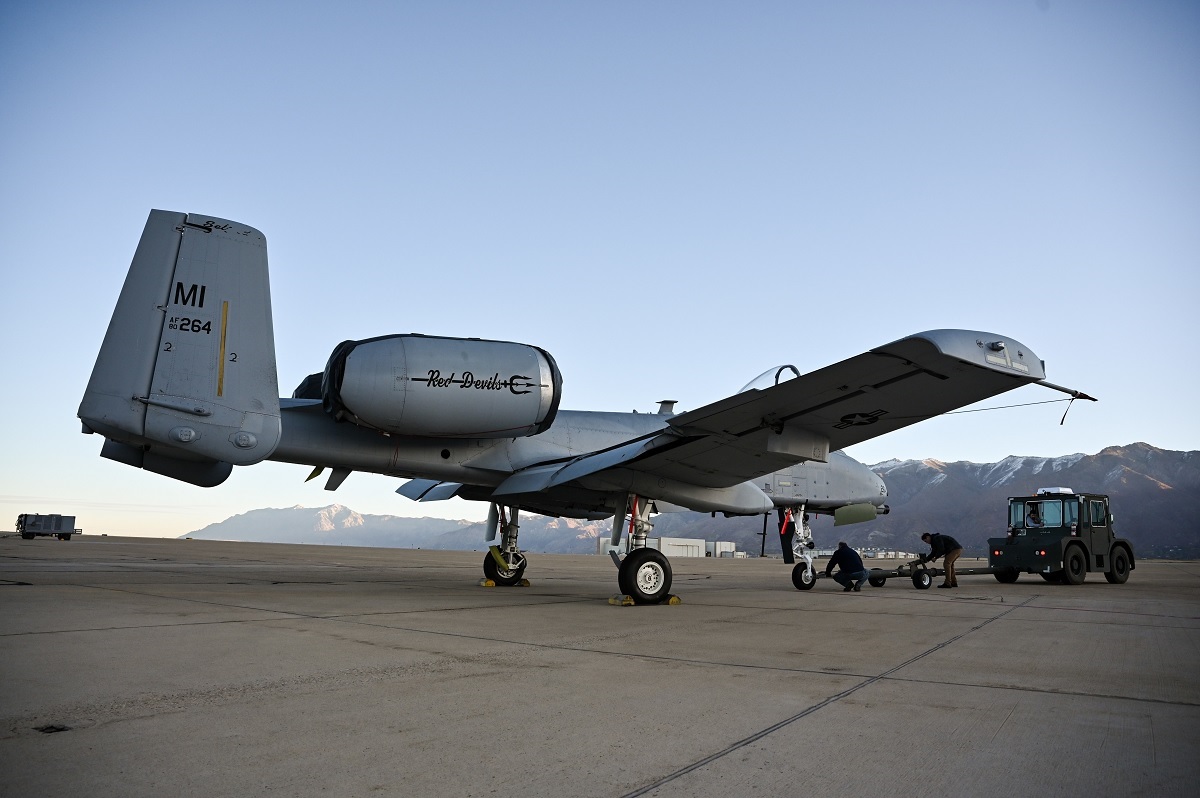 During a training mission over Michigan’s Grayling Air Gunnery Range on Jul. 20, 2017, Capt. Brett DeVries flew 80-0264 back to base for 25 minutes after a misfire in the aircraft’s 30 mm cannon caused the canopy and several panels to blow off.

The skilled professionals of the 309th Aircraft Maintenance Group (AMXG) at Hill Air Force Base (AFB) took a formerly crashed A-10 Warthog and spent more than three years restoring it to a like-new condition.

In July of 2018, tail number 80-0264 arrived to Hill AFB in pieces, strapped to flatbed trucks. As told by Donovan Potter, 75th Air Base Wing Public Affairs, in the article Maintenance Group brings crashed A-10 back to life, now, the revived A-10 is expected to fly back to its home station with the Michigan Air National Guard this week.

During a training mission over Michigan’s Grayling Air Gunnery Range on Jul. 20, 2017, Capt. Brett DeVries flew 80-0264 back to base for 25 minutes after a misfire in the aircraft’s 30 mm cannon caused the canopy and several panels to blow off.

As they headed back, DeVries’ wingman radioed over more bad news. The nose wheel was hung up and the main landing gear didn’t go down.

DeVries made the decision to do a belly landing with no wheels and no canopy. He made such a skilled landing that it was possible for the Warthog to be repaired and returned to service.

That’s how the 309th AMXG got involved.

Air Force officials contacted their elite team of A-10 experts at Hill to do an initial evaluation and see what it would take to salvage the aircraft.

“We knew we could do it, but it would take a long time,” said Daniel Wise, 571st Aircraft Maintenance Squadron (AMXS) A-10 planning chief. “We basically rebuilt the entire front of the A-10 without aided engineering and un-procurable parts that had to be local manufactured.”

Every part that needed to be manufactured was done within the 309th Maintenance Group at Hill and there were plenty of parts constraints on an aircraft that’s more than 40 years old.

“A lot of the parts are unavailable so we have to run them through our local manufacturing process and make them ourselves,” said Scott Oster 571st AMXS lead A-10 planner. “With any of the other weapons systems, if they have a bad part, they order it through supply and replace it. On the A-10’s, we’re kind of in a different world.”

Oster said if they had to go out and get a contract to have a part made, it might take two years. Through the local manufacturing process, they make the part, heat-treat it, surface-treat it and get it on the airplane in about two weeks.

The most significant damage occurred when the gun malfunctioned and not actually from the belly landing.

“There’s a main nose bean right next to the gun that blew up, so the inside of the entire gun cavity had to be rebuilt.” Oster said. “It was just a whole lot of structural work, like 90 percent.”

The A-10 engineers at Hill are the only engineers who touch anything on the A-10s and were key to the success of rebuilding the aircraft.

“It’s constant feedback between us and engineering,” Oster said. “We let them know what our expertise is, through our sheet metal and aircraft mechanics and they’re the ones who run analysis and say if the repair will work. It’s the whole team effort.”

Wise said it took the entire A-10 family working together to get 80-0264 back in the air and everyone involved should be very pleased.

“Our planners, schedulers, engineers, parts makers and everyone on the floor who put this legacy airframe back together are totally appreciated for their skill and overall effort,” Wise said. We’re all pretty passionate about keeping the A-10 alive and in the air. It’s America’s number-one choice for close-air support and getting 264 ready to fly back home is really something to be proud of.”

While DeVries was flying the A-10 during the emergency, he relied heavily on his wingman, then-Maj. Shannon Vickers, and the maintenance team back at Selfridge Air National Guard Base. DeVries had the entire Wing standing behind him.

Thanks to its roughness, the Thunderbolt II can be serviced and operated from austere bases with limited facilities near battle areas. Many of the aircraft’s parts are interchangeable left and right, including the engines, main landing gear and vertical stabilizers. Avionics equipment includes multi-band communications; Global Positioning System and inertial navigations systems; infrared and electronic countermeasures against air-to-air and air-to-surface threats. And, it has a heads-up display to display flight and weapons delivery information.