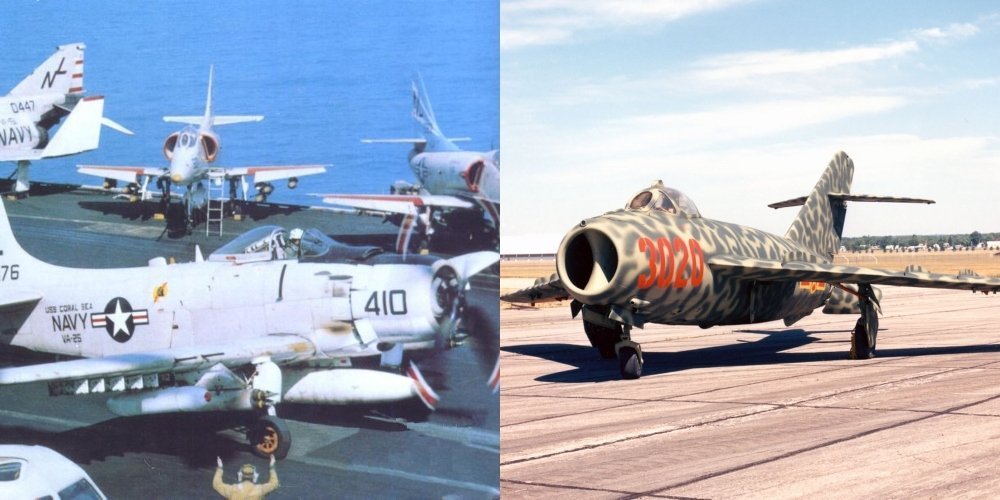 Aboard Midway, the Spad’s radio report was misunderstood as one of the Spads having been downed. Greathouse finally convinced the carrier that they were fine, but North Vietnam was minus a MiG.

“You’ve been had by a Spad, dad.” It was said on the radio by a cocky, grinning Skyraider pilot to an unsuspecting jet jockey, whose “stovepipe” had just been pounced upon by a diving A-1: it maliciously applied as a “zap” to jet aircraft, whose misfortune was to be loitering within view of Spad types; and it was the epitome of defiance of Spad drivers who refused to believe that any airplane, regardless of how new or how fast, was better than theirs. Navy officials frowned on such tactics, but took them in stride, aware that such rivalry was the substance of good pilots. Realistically, a duel between prop and jet aircraft was unthinkable, but it happened on rare occasion during previous wars. Spad pilots in Southeast Asia did not seek air-to-air combat, for the odds favored the nimble, jet-powered MiG-17 in the outcome. But Spad pilots, being a special breed of aviator, would defy those odds—twice.

As explained by Wayne Mutza in his book The A-1 Skyraider in Vietnam, the first Spad-MiG encounter occurred on Jun. 20, 1965, when A-1Hs (call sign “Canasta”), flown by Lt. Cmdr. Ed Greathouse, Lt j.g. James Lynne, Lt. Clint Johnson, and Lt. Charles Hartman, were launched from the USS Midway on a ResCAP mission over North Vietnam. The objective was an F-105 pilot who had been shot down in the vicinity of Dien Bien Phu. The squadron was beginning to feel the frustration and fatigue of being one month into its third period at sea. Operational tempo was at its peak, and VA-25 had suffered its first loss of the war, Spad pilot Lt j.g. Carl Doughtie, on a strike mission ten days earlier.

Lieutenant Commander Greathouse led the flight “feet dry” at about 10,000 feet, a relatively safe altitude from ground fire at that time, since SAMs had yet to become a major threat. Heading inbound, Greathouse signaled the flight to split into two sections, a mile apart, to form a “combat spread,” which offered full coverage from attack. Lynne flew on Greathouse’s wing, while Johnson and Hartman formed the other section. When the four were about 500 miles northwest of Thanh Hoa, 90 miles south of Hanoi, they received a radio message from the destroyer USS Strauss that their radar showed an unidentified target at their one o’clock position, 48 miles away. When it closed to 21 miles at the flight’s six o’clock position, the ship lost radar contact. Greathouse describes what happened next:

“All pilots were looking, and shortly I saw two MiG-17s, in right echelon at my nine o’clock position, slightly above and about two miles away. They were on the same course as our flight and appeared to be cruising at about 300 to 350 knots. They passed us until they got about five miles ahead, and I thought they missed seeing us, so we started a fairly gentle descent on the same heading, as we still had an important mission ahead. With our heavy, and drag inducing, load of fuel and ordnance, I didn’t believe we could successfully engage them at that altitude. I didn’t want to jettison it, as our primary mission still lay ahead, and I thought the MiGs had not seen us.

“I am convinced the MiGs were under radar control and had merely overshot us in their turn for a rear attack, and then missed seeing us as they went by, since we were lower and not silhouetted against the sky below a 14,000-foot overcast. I was sure they had radar control when they started a sharp left turn and continued it until they had us on their nose, at about our eleven o’clock position. I was just about to turn toward them when I saw the lead MiG fire two fairly large rockets at us, so I figured my best escape was straight ahead, as that gave us about 30 to 40-degree deflection and almost opposite courses. I then started a rapid descent and watched the rockets until I was sure they would pass to port and astern. The rockets either were pure ballistic or IR types, and did not have enough discrimination to get a lock-on.

“As we headed down, with mountain ridges across our path and parallel ridges below, I did a quick 180-degree turn. We dove at about a 50-degree angle and leveled off sharply at about 500 feet in the river valley between two parallel ridge lines. I really hadn’t expected the MiGs to follow us down all the way, but as I looked left to my other section, I saw one of the MiGs about 300 feet behind, firing his cannons. I glanced behind and saw the other MiG right behind my section, but not firing yet. We were now headed southeast down the river valley with ridges and mountains between 500 to 1,500 feet to either side of us. We couldn’t break left due to the higher ridge on that side, and I wasn’t sure we could reverse in the width of the valley. Since the ridge on the right was ending just ahead of us, I called for both sections to break right and got as low as I could, about 200 feet. and turned right around the end of the ridge, holding it as close to its face as I dared.

“Just as I turned and started pulling about three Gs, two more rockets passed just below my section and hit the ground ahead of us. I continued the turn for 180 degrees, looked back, and saw that the MiG on our tail had pulled up. It was making a reversal at 1,500 to 2,000 feet and was coming back down on us from our seven-thirty position. Once again I broke hard through a small dip in the karst ridge, holding as tight a turn as I could and as low an altitude. I called the flight to drop their external loads, as our tanks held over 200 gallons of fuel, adding 3,000 pounds to the aircraft. In a steep turn of about two and a half Gs, we really started turning as they released. The MiG went outside the turn, climbed, and did another low altitude reversal. We had completed a 360, and once again had the same ridge on our right. I spotted my other section at about ten o’clock and 1,000 feet above, in a starboard turn toward me.

“The MiG was coming down on me again from my seven o’clock position, so I broke right, repeating my ridge-hugging maneuver, holding the turn as steep as possible This denied the MiG a sufficient firing lead and he started climbing, but by this time my second section was coming down on him and both fired long bursts at extremely short range. He passed right between them in nearly 90 degrees of bank at about 700 feet. The MiG’s nose dropped and he continued the turn, hit the side of the hill, and exploded. I don’t believe he saw the second section until the last moment, and he was taken completely by surprise as he pulled off my section. When he impacted I had completed my full turn around the ridge, and looked across the valley to the north and saw the other MiG at my seven o’clock position, climbing out to the northwest and disappearing. I assume he either fired all his ammo or his guns jammed. He did not want to get into the action.”

Although Johnson’s main radio was knocked out from the cat shot, he knew what was happening when the fight started and followed the flight down. Their best hope was to get very low and try to outturn the MiGs. When Hartman dumped his stores, his Spad leaped upward and at that precise moment, cannon fire from a closing MiG filled the airspace he had just occupied. Greathouse adds:

“Our basic plan was to attempt to separate the opponents, then get into a position where we could get both sections on one of their planes, which worked perfectly in this case. I was surprised at the maneuverability of the MiGs and the pilot’s skill in staying behind me at all times by his low altitude reversals, denying me time or latitude to reverse my turn and bring my guns to bear. The value of section integrity is illustrated in this action. Both wingmen did a superb job of holding their positions on their leaders, despite the radical, low-level maneuvering.”

The Strauss reported that other bogeys were inbound to the Spads’ position. They joined up low-level over the Gulf for the flight back to Midway. The setting sun meant a night landing aboard the carrier, but the euphoric Spad pilots did not experience the usual anxiety of the tricky recovery. Aboard Midway, the Spad’s radio report was misunderstood as one of the Spads having been downed. Greathouse finally convinced the carrier that they were fine, but North Vietnam was minus a MiG.

Just three days earlier, F-4B Phantoms of VF-21, also aboard Midway, had scored the first two MiG kills of the conflict. The Spad pilots and F-4 crews were presented awards in a full dress ceremony on Midway’s flight deck on Jun. 23. Credited with half a MiG kill each, Johnson and Hartman were awarded Silver Stars, while Greathouse and Lynne received Distinguished Flying Crosses. In the true tradition of inter-service rivalry, the commander of the Seventh Fleet reveled in presenting the awards and beating the Air Force. Bolstering that rivalry was the following message sent to the USS Midway from the commander of Task Unit 70.2.5:

“For CO ATKRON 25, current color scheme at 5th AF HQ: envious green on USAF faces (after MiG kills by F-4) has been replaced by white (astonishment) and red (impotent rage) at the news of the superb performance by your pilots in destroying another MiG.”

The news spread quickly. South Vietnam’s Premier Ky, himself an A-1 pilot, when he heard of the shootdown, recognized Greathouse’s name as a Skyraider RAG instructor. Ky insisted that the Spad pilots be his guest in Saigon, where they were awarded Air Gallantry Medals, Vietnamese pilot’s wings, and honorary commissions in the South Vietnamese Air Force.

The A-1 Skyraider in Vietnam is published by Schiffer Publishing and is available to order here. 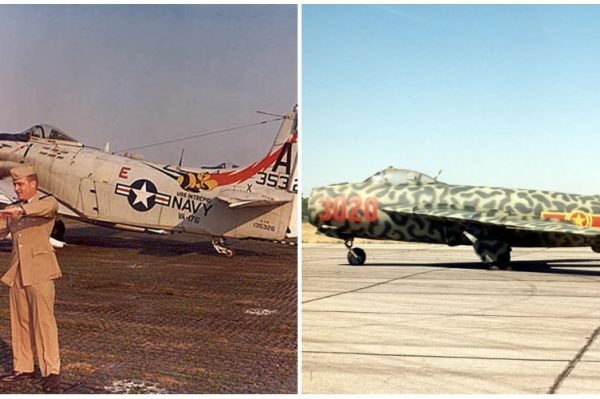 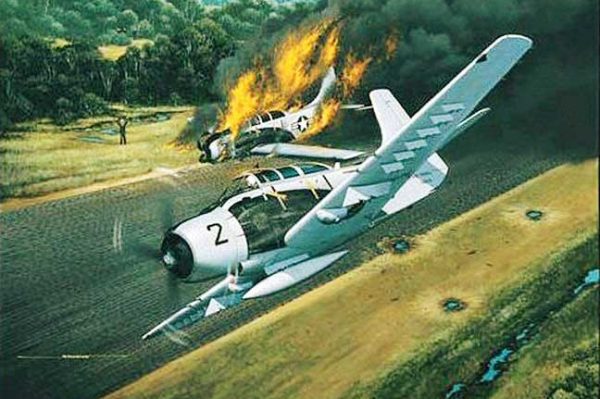