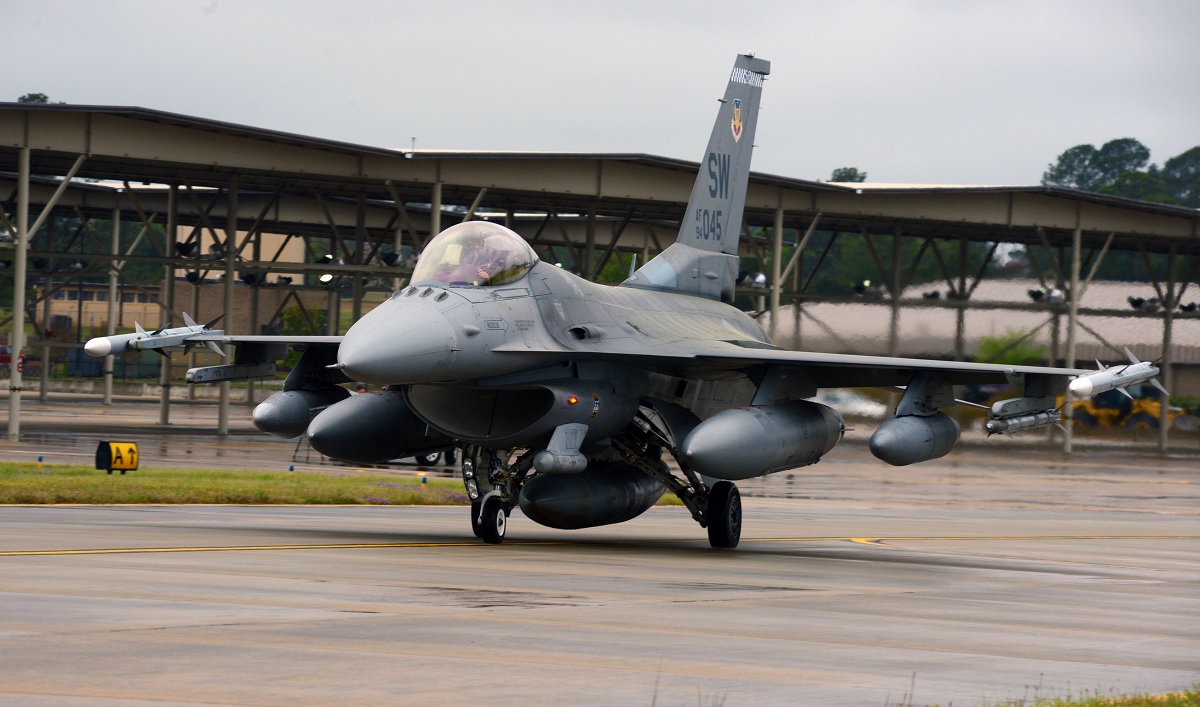 According DFC citation, Nygard, an instructor pilot and flight commander, and Cruz, a search pilot, employed weapons on two separate attacks that “enabled the elimination of a senior Islamic State or Iraq and Syria-K leader and saving the lives of 88 coalition soldiers”

In an hours-long firefight in Afghanistan where two American soldiers were killed in the offset, the remaining 88 American and coalition troops credit their lives to two Shaw Air Force Base (AFB) F-16 fighter pilots.

As reported by Kayla Robins for The Summer Item, Capts. John J. Nygard and Salvador A. Cruz, both members of the 79th Fighter Squadron at Shaw, received a Distinguished Flying Cross (DFC) Medal on Jun. 5, 2018 in a ceremony attended by their families, the Gold Star families of the two fallen soldiers, community leaders, airmen and the others involved in the combat mission.

As we have already explained the DFC is awarded to someone who distinguishes themselves in support of operations by heroism or extraordinary achievement while participating in aerial flight.

“It was a tough night, no doubt,” pointed out Col. Daniel T. Lasica, who pinned the medals on the two captains the day before his time as commander of the 20th Fighter Wing ended as he re-stationed to Aviano Air Base in Italy.

According to the citation accompanying their medals, Nygard, an instructor pilot and flight commander, and Cruz, a search pilot, employed weapons on two separate attacks that “enabled the elimination of a senior Islamic State or Iraq and Syria-K leader and saving the lives of 88 coalition soldiers” near Nangarhar Province, Afghanistan, on Apr. 26, 2017.

“After a nighttime insertion into a known hostile area, friendly forces began taking effective fire from all directions,” their citations state.

Nygard and Cruz were tasked with coming into a chaotic situation and determining over the radio where friendly and enemy forces were located, dropping bombs in close range to friendly forces and remaining overhead while ground forces could evacuate with the two Americans who had been killed.

Nygard, who is from Ohio and has been at Shaw since December 2015, said the success of the mission would have been impossible without trust on all sides, from the two of them to the ground forces to the joint terminal attack controller team.

“They trust us to do our jobs professionally, and we trust them to give us the right information,” he said.

Both Cruz and Nygard, who were on their second to last and last combat mission on that deployment after having already been overseas for six months, said the yelling over the radio and the chaos on the ground was the most intense mission they have encountered.

“I can’t imagine what it’s like,” he said to the mothers of Sgts. Joshua P. Rodgers, 22, and Cameron Thomas, 23. “But I can tell you what Joshua and Cameron mean to me. I’ll never forget your sons. I promise you. As long as I’m alive and I pass this story along to my family, there’s not a day that goes by that I don’t think about them or you and what you did for me. I try to live my life in a way that honors their sacrifice. I tell their story so that other pilots, the new guys, are ready when their number is called.”